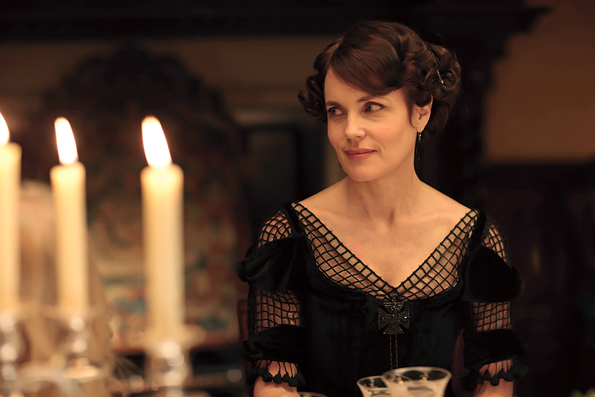 The U.S. is no stranger to British invasions, be it four Liverpudlian moptops or TV shows featuring a surly talent judge seeking a hot new pop singer. But the latest U.K. import to overtake the pop culture zeitgeist is the saga of a World War I-era aristocratic family and their devoted household staff. The Emmy- and Golden Globe-winning Downton Abbey, now airing its second season on PBS, welcomes viewers into its arcane world populated by lords, ladies, entails, deathbed marriages and blackmailing wives. Presiding over Downton Abbey itself is Cora, Countess of Grantham, exquisitely portrayed by Elizabeth McGovern (Ordinary People, She’s Having a Baby). The American-born actress has lived in England for “nearly 20 years,” making her a natural choice to play the Yankee wife of the Earl of Grantham. With the highly anticipated third season of Downton currently in preproduction, McGovern checked in from London for a brief chat.

So the big Downton Abbey news this week is that Shirley MacLaine has been cast as Cora’s mother. Are you excited?

I’m over the moon. She’s just a great actress and is such a life force. I think it’s going to be fantastic.

Does this give you more of an idea about your character’s past, other than the fact that she’s a New York heiress?

Well, yeah, it’s been a very murky area, and casting anyone will, by its very nature, stamp a personality and a definition on a family and a lineage, so the very fact of [Shirley’s] casting gives me a much clearer idea of where Cora comes from. I think that the writers and the producers and I are just coming to terms with where Cora comes from and what her life story is now. I love having the opportunity to explore a part for a great length of time, really get deeper and deeper into it, because you only have a chance to do that once or twice in a career.

The name of Shirley’s character is “Martha Levinson.“ So is it possible that Cora is from a Jewish family?

It is possible! So we’ll see if it has ramifications later on in the story as the inevitable wheels of history roll forward, but to be perfectly honest, I’m finding out along with everybody else [laughs]! So I’m doing my best to adjust to these revelations as well.

There is such a Downton Abbey infatuation sweeping the U.S. right now. Did you ever expect Americans were going to take to it the way that we have?

No, absolutely not. Whenever I work on anything, there’s always the fantasy that what one is doing is the next Citizen Kane-slash-Sopranos. But I have long become accustomed to the fact that the reality of show business rarely falls into place in such a satisfying way, so this was a shock to me. But I can be nothing but grateful and totally overwhelmed by it. I mean, the nicest thing of all, actually, is when an actor feels that little story points are registering with an audience. The fact that the audience is participating in the energy and pleasure of it has been really unusual for me, and needless to say I am definitely enjoying it.

Have you seen any of the Downton Abbey Internet memes such as the “Downton Abbeyoncé” Tumblr or “Shit the Dowager Countess Says”?

No, but there are some really charming spoofs of Downton on YouTube. There’s one that’s little mice in a house that are all the Downton characters. It’s actually so witty and well done. It’s brilliant. The funny thing about Downton is, on one level, when we are doing the work we have no choice but to approach it with complete and utter seriousness, but there’s something about it that is so ridiculously spoofable at the same time. It doesn’t jar with the seriousness of our approach – it’s absolutely appropriate. We all love it!

Do you find that the American reaction to Downton Abbey is different than that of British audiences?

Well, the British love nothing more than to turn on their own icons, so they’ve spent the entire Season Two ripping it to shreds and finding fault with it. Some of which I think was not unjustified, but maybe it’s because I’m not in America, but I haven’t noticed that turn over there as of yet.

Downton Abbey deals with many feminist themes – personified in Lady Sybil – but do you see Cora as a feminist? She seems like the bridge between the generations: She’s very supportive of her daughters, but she is also very good at smoothing things over with the Dowager Countess, who is more of the old-school mindset.

Yeah, I think that’s a very astute reading of Cora’s personality, whether it’s something that’s intrinsic to her nature or whether it’s because she’s American, she’s certainly written as someone who has a lot more emotional and psychological flexibility than her English family has in terms of accepting change. And I think in Julian [Fellowes, creator of Downton Abbey]’s mind, that is characteristic of an American. Although obviously there is the younger generation of the English family that are much more forward thinkers.

It’s my understanding that you are a singer-songwriter and you are recording an album with Michelle Dockery [Lady Mary].

Well, I have a band, Sadie and the Hotheads, and we have an album that is already out that is available on our website. We just finished recording the second album, and many of the songs are recorded with Michelle and she has sung with us a couple of times live. I actually love singing with her because she has a perfect voice for the music. So that’s been a little side pleasure.

The album is called How Not to Lose Things. When is it going to be released?

The plan is for us to release it when Downton Abbey comes back on the air in England, which will be the fall.

How would you describe your music?

It’s very lyric-oriented. To me, the lyrics of the song define the kind of style it is. And my bandmates are capable of doing any style, so in the second CD there are some songs that are very jazzy, and a lot that are more acoustic and folk-sounding.

What’s the significance behind the album title?

It’s one of the songs. All of the songs come from me – where I am in my life, and where I think a lot of people are, which is . . . we’re not old, but we’re not young. We’re not young kids saying, “I love you, I love you, I love you.” We’re looking at our partner of 20 years and exploring what that’s all about, or looking at our kids growing up, and trying to capture musically how that feels. These are things that are on the mind of people in the middle of their life, which I don’t think a lot of music addresses. So “How Not to Lose Things” is somebody who’s lived a long time, and is trying to keep track of everything in their life. When you’ve got a couple of kids and a lot going on all the time, it’s quite a knack to keep it all in place, and all at your fingertips.

Who are your musical influences?

I’m a little trapped in my youth. I always say Joni Mitchell, Bob Dylan, Paul Simon and Leonard Cohen. There’s a certain age where you listen to music a little differently than I think you ever do as an adult. I also like Lily Allen, Harper Simon and Eliza Doolittle.

We’ve already heard Michelle Dockery sing on Downton – are we going to hear you sing in an upcoming episode?