That a band as willfully experimental as Dirty Projectors is now able to pack a venue as large and venerable as Los Angeles’ 1,850-capacity Wiltern Theatre, which they did this past Saturday night, says something both about the band’s evolution and the state of the subculture that spawned them. Indeed, Dirty Projectors represent one of the unlikeliest of indie-rock success stories, and their Wiltern set bore this out, largely by focusing on their most recent – and accessible – material.

Dirty Projectors started in the early Aughts as a collective presided over by the insular vision of leader/mastermind David Longstreth, a genre-dodging guitar virtuoso who beat a path from Yale to Brooklyn via a cerebral bent and a distinctively creaky croon. Dirty Projectors’ rise from the underground began with two oddly inventive mid-period works: 2005’s The Getty Address – an epic conceptual song cycle inspired in partial tribute to, erm, Don Henley – and 2007’s Rise Above, an impressionistic reworking of Black Flag’s influential ‘80s hardcore album Damaged. None of this early material figured in the group’s nearly hour-and-a-half performance at the Wiltern, however. Instead, of the set’s sixteen songs, eleven came from the recent, critically-adored Swing Lo Magellan, four came from Dirty Projectors’ breakthrough 2009 effort Bitte Orca, and one from Mount Wittenberg Orca, a 2010 collaborative EP with Björk. 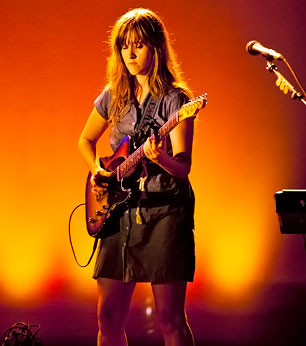 This focus coincides with two significant developments. For one, it marks a solidifying of Dirty Projectors’ lineup, which, in addition to Longstreth, features Amber Coffman on vocals and guitar, Haley Dekle on vocals, synths and percussion, Olga Bell on vocals and keyboards, Nat Baldwin on bass, and Michael Johnson on drums. The other noticeable leap is a refinement and concision of song structure: this process started on Bitte Orca, but with Swing Lo Magellan the band became something even more decidedly approachable. The show commenced with a deceptively gentle, tentative reading of the new album’s title track, featuring just Longstreth, Coffman, and the rhythm section. Bell and Dekle then made their way onstage, and the palette widened further with “Offspring Are Blank,” which powerfully fused the loud-soft dynamics of grunge à la Nirvana with the band’s otherworldly, sometimes dissonant multipart harmonies.

One part of Dirty Projectors’ appeal is Longstreth’s ability to transform discordance into surprisingly catchy riffs and melodies. In this, he evokes no one so much as Captain Beefheart: like the late, great Don Van Vliet, Longstreth is a fearless, demanding bandleader, rehearsing his cohorts until their interplay coalesces unexpected sounds, rhythms, and time signatures into something fresh and alluring. The result becomes its own distinctive pocket, merging contemporary R&B elements with ‘60s folk, new classical, world music, and haunting drones (among other styles). This mélange was clear on tracks like “About To Die,” where Longstreth’s African highlife-influenced guitar lines spiraled around Johnson’s thrilling rhythms. Live, Johnson proves even more percussively fluid and provocative than on recordings, giving the near-Madchester breakbeat groove of “Gun Has No Trigger” new heft.

Longstreth’s rise from rock’s underground towards its center reflects another iconoclastic frontman he resembles, David Byrne (with whom Dirty Projectors have collaborated). Like Byrne, on stage Longstreth makes an advantage out of his awkwardness and idiosyncrasy, providing a human counterbalance to his awe-inspiring instrumental dexterity. And just as Byrne did with Talking Heads, as Dirty Projectors progresses, Longstreth pushes outward to come into his own as the band’s frontman. During the Bitte Orca tour, Longstreth relied on the trio of Coffman, Dekle, and Angel Deradoorian’s voices as a sirenic extension of his muse. On the Wiltern stage, though, he was totally present, more front and center than ever before. 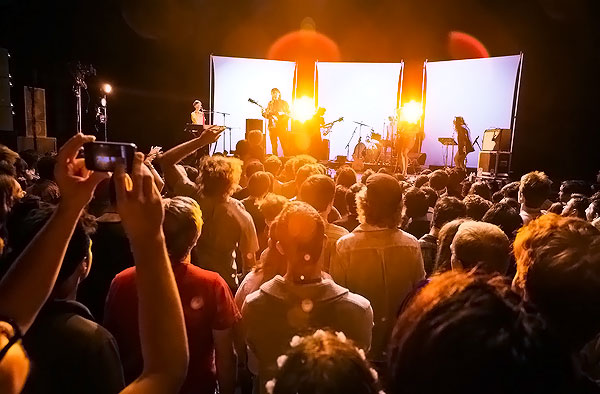 For all his avant-garde gambits, Longstreth still maintains a savvy showman’s streak, building the repertoire to its natural strengths. That’s why it was no surprise that “Stillness Is the Move” – the irresistible leftfield hit off Bitte Orca – provided the encore’s climactic showstopper. Its hypnotic, playfully askew funk and soulful vocalizing by Coffman – effectively Dirty Projectors’ co-lead vocalist (and Longstreth’s romantic partner) – has made fans out of even Beyoncé and Jay-Z, and on this night, Coffman made the song’s appeal clear: she took flight with the song, unleashing a real Mariah/Whitney-style melisma fest that stunned the room. The concert ended with “Impregnable Question,” a seductively syncopated ballad that evoked the night’s real lesson in its joyous, welcoming harmonies and impassioned lyric: Dirty Projectors are edging closer to becoming a pop group – if still hardly a conventional one.

“Dance for You”
“Stillness Is the Move”
“Impregnable Question”