In a genre that prides itself on being real, Dierks Bentley remains among the real-est, whether he’s doin’ a lot of leavin’ or a lot of rising. With this week’s release of his seventh album, “Riser,” Bentley again proves himself one of the best and most relate-able country stars we’ve got. It’s a collection that covers even more territory than usual, including the subjects of being a parent, losing a parent…and, not to stray too far from the country music zeitgeist, partying.

We sat down with Bentley in Nashville last week for a conversation about the new album and how it changed direction mid-stream (or almost at the end of the stream, actually). In the first installment of our two-part interview, he talks about how a project that started out being heavily influenced by his father’s death ultimately came to be a more upbeat affair, for reasons both commercial and personal. 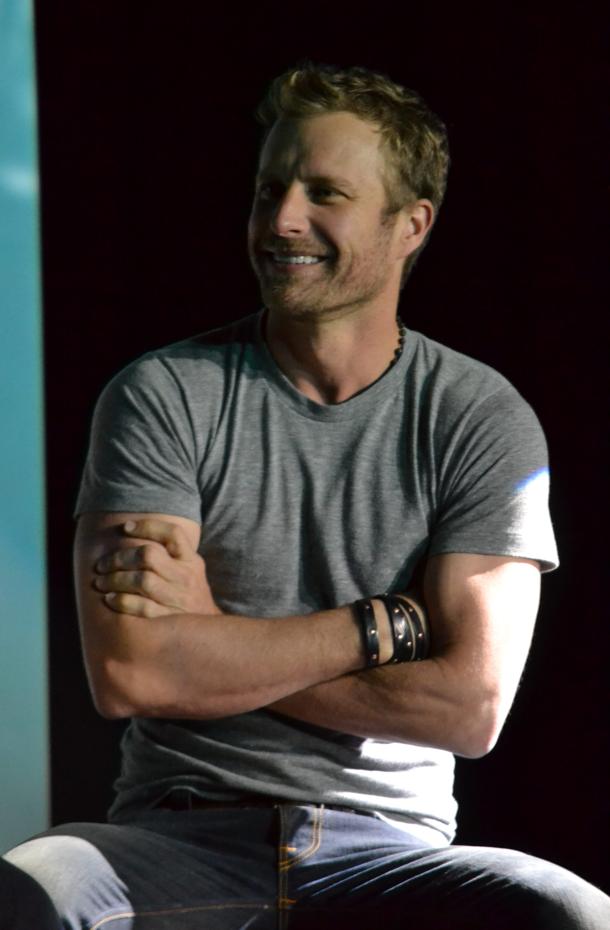 RAM COUNTRY: Speaking of “risers,” your single “I Hold On” has been a riser on the chart.

BENTLEY: Yeah. A slow riser. That’s the way I am. That describes me perfectly.

It did take a long time to finally reach the country top 10. [It’s currently bulleted at No. 9 on the Country Airplay chart after 26 weeks.]

We didn’t help ourselves by putting out “Bourbon in Kentucky” [as the initial single preceding the album] and then having to get out the lasso and go, “Whoa. These are not the drones you’re looking for. No no no, that wasn’t our first single, sorry. I know we’ve got 30 stations on it. Here’s our first single, ‘I Hold On.'” There are so many people trying to get a song played on radio that to have to pull that kind of pullback/switcheroo thing is really hard. It literally is like trying to stop a train. So we didn’t do ourselves any favors. But I loved “Bourbon in Kentucky,” and that’s the mood I was in when we put it out. I wanted something dark. I really believed in that song, and I’m still glad we put it out. But putting that song out in the middle of summer might not have been the best idea, because it really stuck out like a sore thumb on country radio.

But I really believe in “I Hold On.” Even on the road when “Bourbon” was a single, I was still doing “I Hold On” live, because there was an immediate connection with the crowd. I started that song in Arizona, looking up at a sunset, thinking about my dad, thinking about the road trip we took from Phoenix to Nashville in that Chevy truck, and why do the hell do I still hold on to that truck? And I started thinking about why I like playing that one guitar, which is all beat to hell. I don’t know — I just like old stuff. I think everyone can relate to the little things they have that they hold onto. When my dad was passing away, the one thing I wanted out of anything was just his original Ironman watch. I just love stuff that has history and stories to tell. The single definitely taken a while to get going, but they’re singing it back now pretty loud.

“I Hold On” came about as a result of your father’s death, and so did “Here on Earth.” There are some somber moments, though I know that saying “Hey, Dierks made a contemplative record” may be the kiss of death. And in fact the whole thing is well rounded. Was it tough to find a balance? Because you had songs about death or missing your kids, did you have to take extra care to make sure you had some party songs on there, too?

Well, you’ve got to give them a chance to catch their breath or dry their eyes. I love themed records. I love dark records. I could listen to Strait/Jones sad songs all night long. This record started off being that kind of a direction, with my dad passing away and some of the heavier stuff. But then kind of a cool thing happened. When “Bourbon in Kentucky” kind of died at radio, we reset the gears. It gave me an extra two or three months to go back into the studio. I’d just been on the road with Miranda [Lambert] all summer long doing the Locked and Reloaded tour, and never had such fun doing a co-headlining tour in my life. That kind of summer vibe got translated into the album when I went back and cut “Back Porch,” and made a decision to keep “Drunk on a Plane” on the album, because I was in a better mood, I guess; and “Sounds of Summer” made the record. There was a big change from grief to gratitude. My band and the people that know me on the road know me as an upbeat, happy, fun-loving person. Though the record started off as one thing, it ended up being less about this moment with my dad and that darkness and it became more of an overall look at the last two years.

And really all of my records have been like that, going back to “Modern Day Drifter,” which was really about what I was doing at the time, when I was single. I’m trying to make snapshots. I don’t think I’ve done it as well at certain times. But I think “Up on the Ridge” was a real snapshot, and “Home” was, and I think this is probably the best one I’ve ever had. Then again, this is the most material I’ve had to work with, personally, as far as stuff going on in my life.

The song prompted by your dad’s death, “Here on Earth,” will be the most striking song for many people who hear the album. So many country songs dealing with the death of a loved one try to come up with a rationale or feel-good twist, but this is a no-resolution song.

No, there’s no resolution. The only answer you’re gonna find is there’s no answer here on earth — no matter what you believe. I got that title when I was at a Holly Williams show at the Belcourt Theatre, and she talked so much about death and family, and she has this rich family history, obviously. My dad had just passed away. The guy in the song just wants to believe, in the end. But your faith can be tested pretty hard. When your dad passes away, at least it’s a natural thing. But with the Sandy Hook school shooting, which inspired probably more of those lyrics than my dad, I mean, that’s unnatural. How do you find an answer for that? Your dad passing away sucks, but that’s normal. When a child gets taken away from you by a gun, that’s not normal. How do you find a sense of resolution in that? I don’t care how strong your faith is.

So the Sandy Hook shooting was even more of an inspiration than your personal situation with your father?

And you go from that to “Drunk on a Plane,” which is a lot of fun.

You like it? Peter Cooper [the critic for the Tennessean] called, and I asked him what he thought, and he goes, “It’s a hoot.” I go, “A ‘hoot.’ I don’t know if I like that. A hoot?” But there are times to not take yourself too seriously. And I feel with this record, there are times that it definitely takes itself very seriously. So I’m having to learn to live with that word. I don’t know if I want to put a single out that’s a hoot! But I do think it’s funny and it’s light. And I can’t just put out a record full of heavy songs. There has to be some release, between the two worlds. That’s what country music is, I think is, the tension of the good and the bad. Whether it’s a happy song with a sad melody or an album that has both happy and sad songs.

In the second part of our interview, we’ll talk with Bentley about reconciling the desire to be the best parent he can be with the instincts of a serious country music competitor.