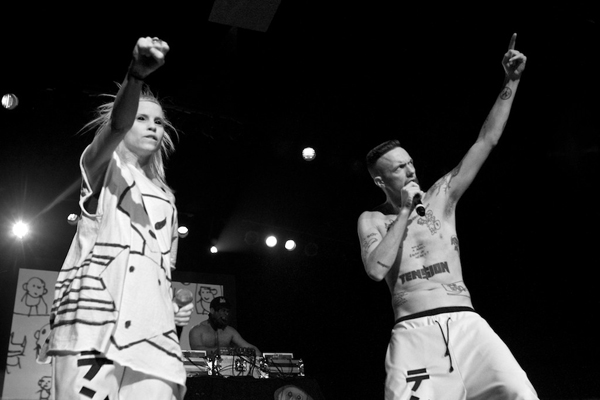 Few in the crowd seemed to hear the punchline, not that it mattered much. The opening of the joke – “Two penises rob a bank” – spoke volumes about the man who delivered it, the Charlie Chan-ishly mustached South African provocateur who calls himself Ninja, and his dead-eyed pipsqueak sidekick, who answers to Yo-Landi Vi$$er. As the comically defiant faces of Die Antwoord, the electro-rap pranksters from the hybrid gutter culture of Cape Town, these two characters have created a patently offensive, and currently quite popular, brand of performance art that must feel like robbing a bank.

Like so much provocative performance, resistance is futile. (Though nominally a hip-hop act, Die Antwoord come across like a gold-capped, dual-gendered Sex Pistols with, uh, flow.) The band, whose name means “The Answer” in Afrikaans, raised some big, entertaining questions Friday at the Paradise Rock Club in Boston, the second night of their current U.S. tour in support of their second album, Ten$ion. Questions such as: what, exactly, lies “beyond the pale”? Who’s to blame when art gets this purposefully ugly – the performer or the culture? And if you insist enough times that you’re onto “some next-level shit,” does it become the truth?

In the course of a 75-minute throttling, the cute (if unfortunately shorn) couple and their creepy mixmaster, DJ Hi-Tek – who lorded over the stage in a twisted rubber mask and a hairy hump of shoulders – covered “360 de-fuckin’-grees” of rap’s basest impulses. Evidently Yo-Landi wasn’t listening this week when Madonna dismissed M.I.A.’s middle-finger salute during the Super Bowl halftime show as mere “punk rock.” She flipped off the audience, which roared its approval. She grabbed a boob (her own) and chirped “Yippee-ki-yay, motherfuckers!” And yes, Ninja stripped down to his infamous Dark Side of the Moon boxers (let’s pray he has more than one pair) and whipsawed his junk, making Elvis’s pelvic act seem like an old man in a rocking chair with a plaid blanket over his lap.

They played most of the “hits,” if you can call ’em that, including the dancehall playground chant “Fatty Boom Boom,” the insidiously robotic “I Fink U Freeky” and “Fok Julie Naaiers,” the song that supposedly scared Interscope into shifting the blame for Ten$ion to the group’s own vanity label. Their assault on Enya (“Orinoco Ninja Flow”) was sublimely ridiculous, and the band’s 2010 debut, $O$, was represented by “Rich Bitch” (Yo-Landi in a gold lamé track suit) and the beats-and-synths rap “Enter the Ninja.” That’s the little ditty that lays out the group’s creation myth and that of “zef,” the underground culture they just might have invented from whole cloth.

Actual cloth draped Hi-Tek’s equipment deck, providing a backdrop for the band to project a series of stark, Keith Haring-esque drawings and footage of the late artist Leon Botha, the little guy in their videos who had the premature aging syndrome progeria. That too could’ve been intentionally symbolic: an act this over-the-top is bound to age prematurely. Yes, yes, already: we fink u freeky.