Two of the original members of Depeche Mode have reunited for the first time since 1981. Vince Clarke and Martin L. Gore have announced they will release a series of EPs and a new album under the band name VCMG.

“Out of the blue I got an email from Vince just saying, ‘I’m interested in making a techno album. Are you interested in collaborating?'” reports Gore in a press release. The pair’s first EP of remixes, Spock, will have an exclusive release on Beatport on November 30th before becoming widely available on December 13th. Their untitled new album is expected in early 2012. 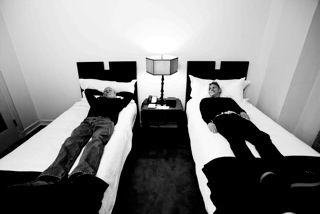 Vince Clarke was one of the four co-founders of Depeche Mode in 1980. He soon left, citing creative differences, and went on to co-found Yazoo with Alison Moyet and, later, Erasure with Andy Bell. Gore became Depeche Mode’s principal songwriter after Clarke’s departure.