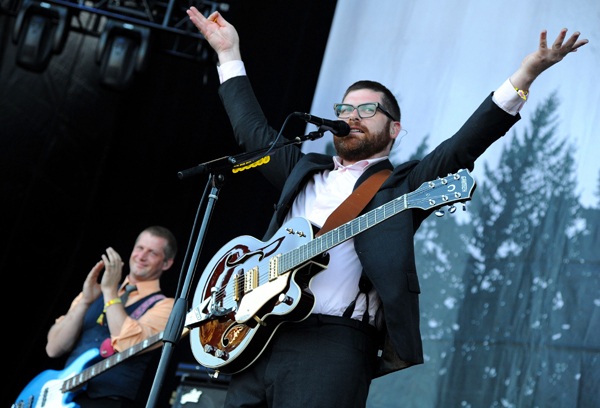 The Decemberists have withdrawn their fundraising support for the Susan G. Komen for the Cure Foundation after the organization’s decision to stop providing funding for Planned Parenthood.

The rockers have realigned themselves with Planned Parenthood’s Breast Health Emergency Fund since Komen withdrew funding for breast cancer examinations on Tuesday. Komen claimed that a change in their grants policy prevented them from contributing further, though Planned Parenthood insisted that the foundation had bowed to pressure from anti-abortion groups.

Following Komen’s announcement, the Decemberists redirected funds from their “Team Jenny” t-shirts (created for keyboardist Jenny Conlee, currently in remission for breast cancer) to Planned Parenthood. They stated on their website:

The Decemberists are deeply troubled by Komen for the Cure’s recent decision to cut off funding to Planned Parenthood, a vital resource in the battle against breast cancer. Providing cancer screenings to low income women is integral to the prevention and defeat of breast cancer and it is unconscionable that Komen should politicize this very important issue by bowing to the fear campaign being waged against PP by the right. We’ve decided to redirect the proceeds of the Team Jenny t-shirts and buttons away from Komen for the Cure. 100% of the net profits of these items will be instead donated to Planned Parenthood’s Breast Health Emergency Fund.

Please help to support this essential institution. And, if you’ve supported the Team Jenny effort in the past, please write to Komen for the Cure via their site or via twitter (@komenforthecure) and let them know that undermining women’s health for political reasons is unacceptable.