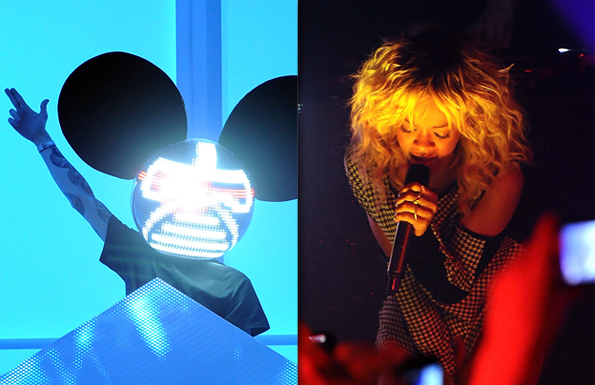 The shiny metallic streamers were already six inches deep on the floor by the time Deadmau5 came onstage last night at L.A.’s House of Blues, where the Canadian electro star headlined a wee-hours post-Grammy gig that also featured performances by Rihanna, Calvin Harris and Sebastian Ingrosso of Swedish House Mafia. With ticket prices ranging from $250 to $1,000, the concert was billed as a fundraiser for Children’s Hospital Los Angeles. Yet it also served as one more sign of what Skrillex had called a “crazy year” for dance music when he won the first of three Grammys earlier Sunday. Put it this way: Last night Rihanna was onstage for approximately seven minutes, while Harris (who wrote and produced Rihanna’s hit “We Found Love”) played for an hour. And nobody seemed to mind.

Not that Rihanna’s seven minutes weren’t a bite-sized thrill. Rocking a checked mini-dress and blonde Farrah Fawcett ‘do, she jumped, fist-pumped and perhaps even a sang a bit of her way through jacked-up versions of “Where Have You Been” and “We Found Love” with help from Harris and two backup vocalists. Confetti fell from the ceiling during the climax of the latter tune, and then Rihanna was gone, good deed done and no doubt some after-after-party to get to.

The gearheads’ sets were no less festive, with Ingrosso, Harris and Deadmau5 all dropping Daft Punk tunes to the crowd’s immense delight. Harris even threw in Fatboy Slim’s always-welcome “Praise You,” not to mention a few bars of “By the Way” by the Red Hot Chili Peppers. (Maybe the Scottish disco revivalist is gunning for Deadmau5’s spot in next year’s rock-meets-electronica Grammy thing.) The masked one himself actually removed his signature costume piece a few minutes into his set, but he never abandoned his dedication to the seemingly endless crescendo. Fresh from a huge television spot, Deadmau5 started high and kept climbing.