Update: David Gilmour has announced that the proceeds from the auction will benefit ClientEarth, which funds environmental lawyers and experts in their fight against climate change. “The global climate crisis is the greatest challenge that humanity will ever face, and we are within a few years of the effects of global warming being irreversible,” he said in a clip. “As Greta Thunberg, the 16-year-old Swedish climate activist said in a speech earlier this year, ‘Either we choose to go on as a civilization, or we don’t.’ The choice really is that simple, and I hope that the sale of these guitars will help ClientEarth in their action to use the law to bring about real change. We need a civilized world that goes on for all our grandchildren and beyond in which these guitars can be played and songs can be sung.” Christie’s estimates that several of his guitars could sell for between $100,000 and $150,000, including his famed “Black Strat.”

Original story: This summer, David Gilmour will be auctioning more than 120 of his guitars, including many of his signature instruments. The most notable instrument in the lot is the Black Strat, the 1969 Fender that Gilmour bought at Manny’s in New York City and used to record everything from Pink Floyd’s Dark Side of the Moon to his recent solo recordings and touring, including his jaw-dropping performance in Pompeii. It’s expected to go for between $100,000 and $150,000. The instrument, with the many modifications Gilmour made to it, is so legendary that there’s a book devoted to it.

The auction will take place at Christie’s in New York, which is calling it the “largest and most comprehensive collection of guitars to be offered at auction,” on June 20th. Proceeds will benefit charitable causes. (Read our wide-ranging Q&A with Gilmour on the auction.)

The collection will launch at Christie’s London showroom on King Street and be on view from March 27th to the 31st. It will then go to Los Angeles for a showing between May 7th and the 11th with a final chance for people to see the instruments in New York between June 14th and 19th. 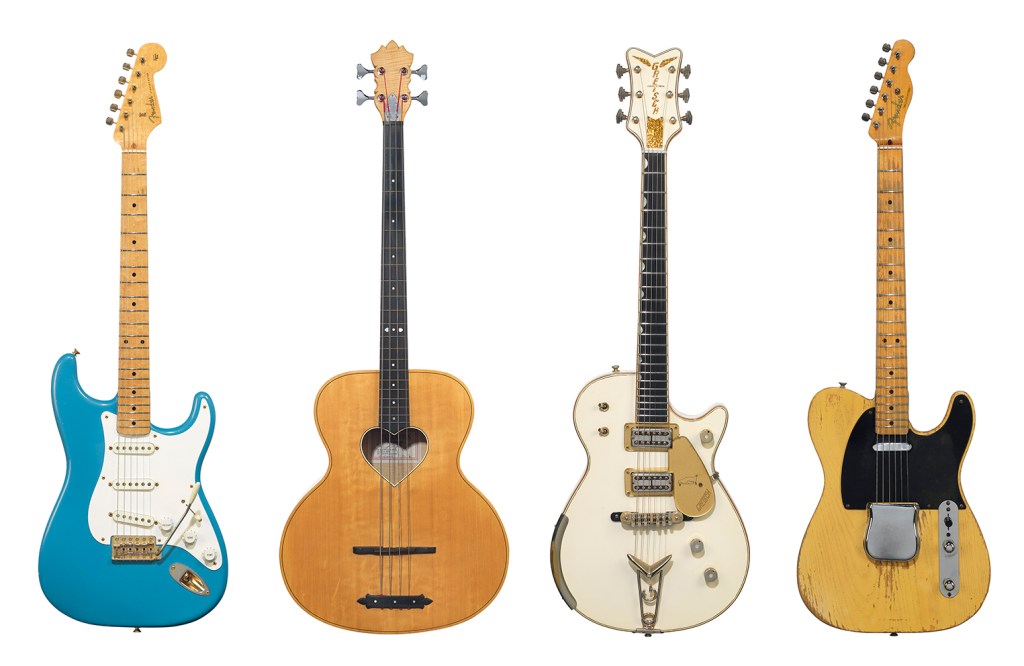 “These guitars have been very good to me and many of them have gifted me pieces of music over the years,” Gilmour said in a statement. “They have paid for themselves many times over, but it’s now time that they moved on. Guitars were made to be played and it is my wish that wherever they end up, they continue to give their owners the gift of music. By auctioning these guitars, I hope that I can give some help where it is really needed and through my charitable foundation do some good in this world. It will be a wrench to see them go and perhaps one day I’ll have to track one or two of them down and buy them back!”

In an interview with Rolling Stone, Gilmour said that people should not interpret this auction as any indication of retirement. “Retiring is not a hard and fast thing for me in my life,” he said. “I don’t really have to retire. I don’t have to say those words. I don’t have to state that have retired or anything like that. If I retire, it will be a quiet, unnoticeable process at some point. But I’m not at that moment.”