David Cassidy, the musician, actor and Partridge Family teen idol, died Tuesday, according to The Hollywood Reporter. He was 67.

Cassidy’s representative Jo-Ann Geffen confirmed his death, saying, “On behalf of the entire Cassidy family, it is with great sadness that we announce the passing of our father, our uncle, and our dear brother, David Cassidy. David died surrounded by those he loved, with joy in his heart and free from the pain that had gripped him for so long. Thank you for the abundance and support you have shown him these many years.”

Cassidy was recently admitted into a Florida hospital in critical condition after suffering from liver and kidney failure. At the time, Geffen said, “He is conscious and surrounded by family and friends, nothing is imminent and we are taking it day by day.” She added that doctors were keeping Cassidy “as well as they can until they can find another liver.”

Earlier in the year, Cassidy revealed that he was battling the early stages of dementia, an illness both his mother and grandfather suffered from. Cassidy’s admission came after video emerged of the singer struggling to remember lyrics and stumbling around the stage during a California concert.

“I was in denial, but a part of me always knew this was coming,” Cassidy said of the diagnosis, which forced him to cease touring. “I want to focus on what I am, who I am and how I’ve been without any distractions. I want to love. I want to enjoy life.”

The son of parents who performed on Broadway, Cassidy started out as an actor in his late-teens. After appearing in a short-lived Broadway show, the 19-year-old Cassidy moved to Los Angeles where, after guest spots on shows like Bonanza and Adam-12, he was cast as Keith Partridge, lead singer and guitarist of the fictional family band at the center of the musical sitcom The Partridge Family. The show arrived just as The Monkees, a program that used a similar blueprint, was petering out. Cassidy’s real-life stepmother Shirley Jones played the Partridges’ matriarch.

“My career path took a very different turn from what it was originally going to be. I wanted to be an actor but I saw The Beatles on Ed Sullivan, that first appearance, and wanted to play guitar,” Cassidy told the Phoenix New Times in 2012.

Over the course of four seasons and 96 episodes, The Partridge Family became a hit both on television and in music, where their song “I Think I Love You” became a Number One hit. The fictional Partridge Family band was even nominated for Best New Artist at the 1971 Grammys. Thanks to the show and band’s success, Cassidy quickly ascended to teen idol status: According to Cassidy’s website, at the height of his fame, the David Cassidy Fan Club had more members than the Beatles Fan Club and Elvis Presley Fan Club combined. 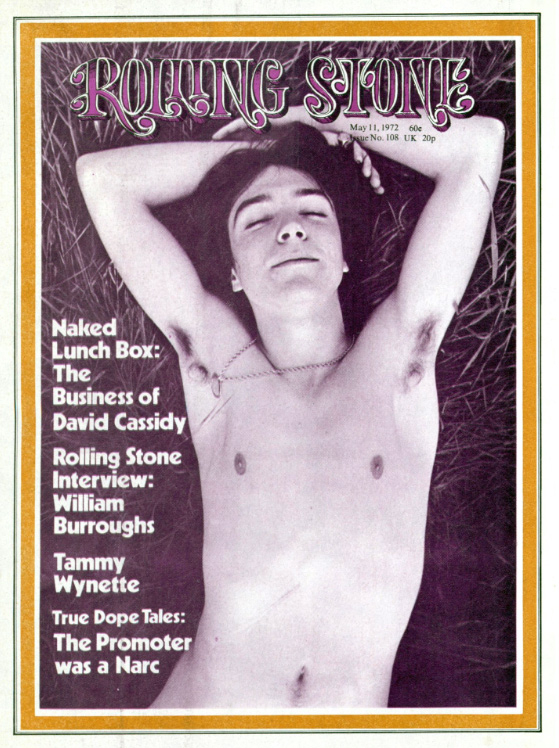 In an attempt to shed his bubblegum image, Cassidy appeared nude on the cover of Rolling Stone in 1972, one of the magazine’s most controversial covers. In the corresponding interview, the then-21-year-old candidly discussed his drug use (“not smack, but grass and speed and psychedelics”) and what he recognized was the short shelf life of a teen heartthrob.

Cassidy’s debut solo album Cherish, released in 1972 amid Partridge mania, was similarly successfully. However, following the cancelation of the series in 1974, Cassidy struggled to reach the same heights as his early Seventies fame. By 1978, Cassidy returned to television for the detective series Man Undercover, which ran for 10 episodes before it was canceled.

While the spotlight on Cassidy dimmed after The Partridge Family, the singer remained a fixture in the music world, recording with artists like the Beach Boys – Carl Wilson and Bruce Johnston appear on Cassidy’s 1976 LP Home Is Where the Heart Is, while Brian Wilson co-wrote “Cruise to Harlem” with Cassidy – and befriending John Lennon.

“John and I became good friends when he was recording Rock and Roll so I was able to come down to the studio a couple of times and if you could imagine Phil Spector walking around with a fucking gun… It was nuts,” Cassidy said.

In 1985, George Michael, who cited Cassidy among his chief influences – Cassidy’s “Daydreamer” was a Number One hit in the United Kingdom in 1973 after failing to chart stateside – collaborated with Cassidy on the single “The Last Kiss,” with the Wham! singer providing backup vocals on the song off Cassidy’s 1985 comeback LP Romance.

However, Cassidy’s late career was often marred by tabloid headlines and mug shots as the singer was arrested on three separate DUI charges since 2010 as well as a “leaving the scene of the accident” charge. Cassidy also fought a well-publicized battle with drugs and alcohol over his career.  Despite the legal troubles, Cassidy continued to record music, act and tour to his legion of fans up until his dementia diagnosis.

“There’ll be a time when this whole thing will be over. I won’t do concerts anymore, I won’t wake up in the morning feeling drained, and I won’t be working a punch card schedule. I’ve had to sing when I was hoarse. I’ve had them with a gun at my head, almost, saying “Record, ’cause we’ve gotta get the album out by Christmas!” I’ll feel really good when it’s over,” Cassidy told Rolling Stone in 1972. “I have an image of myself in five years. I’m living on an island. The sky is blue, the sun is shining. And I’m smiling, I’m healthy, I’m a family man. I see my skin very brown and leathery, with a bit of growth on my face. My hair is really long, with a lot of grey. I have some grey hair already.”