Dave Grohl is an evangelist for the soul of rock & roll, and he’s gotten into the habit of making his adolescent rock dreams come true. It happened again last night at the Hollywood Palladium, where he was joined by Stevie Nicks, John Fogerty, members of Cheap Trick, Rage Against the Machine, Fear and a small army of heroes and contemporaries in celebration of the late, legendary L.A. recording studio Sound City.

For more than three hours, Grohl and his Foo Fighters ripped through a chunk of rock & roll history, from pop to punk to classic rock, immediately following the premiere of his inspired new documentary, Sound City: Real to Reel, at the old Cinerama Dome blocks away.

“They made a movie about it, but they missed one little part,” Fogerty shouted early in his set with the Foos, dressed in jeans and flannel shirt, looking over at Grohl. “What we got in common is we all love that guy right there.” 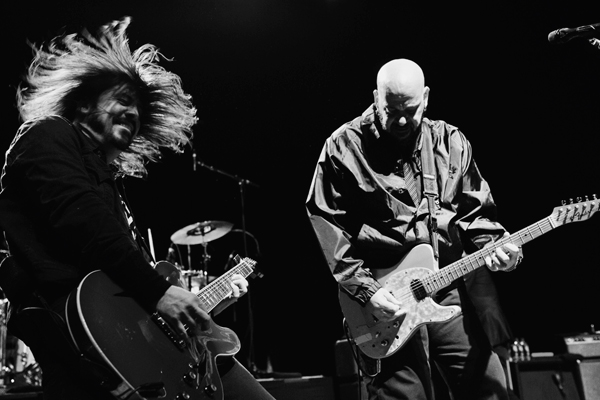 Fogerty rocked through five Creedence Clearwater Revival standards and his 1985 solo hit “Centerfield,” the last one played on a baseball bat-shaped guitar. Grohl shouted along to “Born on the Bayou” and traded verses on “Fortunate Son.” At the close of “Bad Moon Rising,” Grohl looked up with hands in praying position, one more dream fulfilled.

The night’s closing set had the Foos led by Nicks, beginning with “Stop Draggin’ My Heart Around,” her 1981 hit with Tom Petty. Grohl was her singing partner this time, and Foo Fighter Chris Shiflett plucked dreamy bits of electric guitar.

Video: Dave Grohl’s ‘Sound City’ Doc Gets Trailer
Nicks arrived in black dress and tinted glasses, blonde hair past her shoulders, banging a tambourine. Fleetwood Mac‘s “Dreams” unfolded amid undulating, spacey waves of sound and feeling. For “Landslide,” Grohl backed up Nicks alone on 12-string acoustic, as the crowd sang and lifted up their glowing cell phones. One guy deep in the crowd kept it analog, holding up a single cigarette lighter.

Before beginning the soundtrack’s dramatic “You Can’t Fix This,” Nicks explained that the song was based on a poem inspired by the recent death of her teenage godson at a fraternity party, a somber but moving note in an otherwise celebratory evening. And her set-closing “Gold Dust Woman” was dark and smoldering, rising from a noisy swirl, closing amid fading waves of feedback and a single, crashing beat from Taylor Hawkins. This summer’s Fleetwood Mac tour will have something to live up to.

Between sets, a movie screen descended for excerpts and outtakes from the documentary, including a comment from Fogerty at the core of the film: “It’s not the gear, it’s not the technology. It’s the people.”

Sound City, proudly analog and tape-based, was where Nirvana recorded its career-making Nevermind. Grohl’s comments at last year’s Grammys were widely (mis)interpreted as being anti-EDM, when his sermon was really a warning against perfectionism and polish over the human element. It’s the same reason punk rock was invented in the indulgent, glossed-up Seventies.

The night’s juxtapositions might have seemed perverse to a musical ideologue, but it hung together as a simple celebration of all that once inspired the concert’s generations of rockers. No one was more euphoric than Rick Springfield, who repeatedly tossed his guitar high into the air between songs, including his collaboration with the Foos on the movie soundtrack “The Man That Never Was.” His “Jessie’s Girl” was one of the night’s biggest crowd-pleasers, and like other tunes from his pop-rock catalog, it was toughened up in the hands of the Foos. 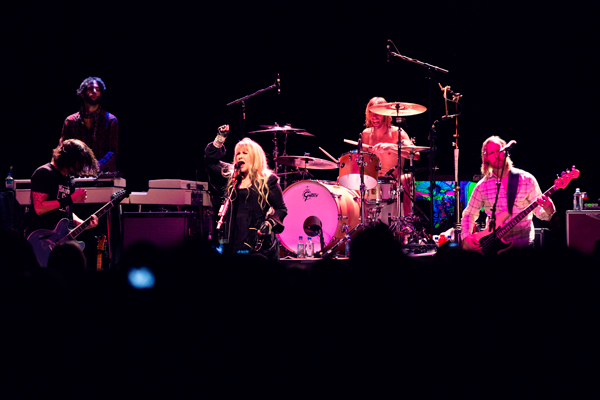 Another implausible lineup featured Slipknot/Stone Sour singer Corey Taylor, Cheap Trick guitarist Rick Nielsen and Nirvana bassist Krist Novoselic, with Grohl on drums, ecstatically running through a set heavy with Cheap Trick hits. “I was in Kansas City 12 hours ago,” Taylor told the crowd. “There was no fucking way I was missing this.”

Cheap Trick’s “Hello There” had Taylor wailing, “Are you ready to rock?” beside Nielsen in traditional bowtie and cap. The Slipknot growler sang “Surrender” as if he was always meant to. “From Can to Can’t” (from the soundtrack) was built from a Beatles “I Want You (She’s So Heavy)”-like guitar pattern. During Fats Domino’s “Ain’t That a Shame,” Novoselic kicked high into the air, swinging his bass across the stage, an expression of real joy on his bearded face.

Earlier, Grohl first slipped behind the drums with Black Rebel Motorcycle Club, pounding through the brain-scorched psychedelia of “Heaven & All,” which opens the documentary’s soundtrack, and a stormy “Whatever Happened to My Rock ‘n’ Roll” (from BRMC’s 2001 debut).

“Dave Grohl rhymes with rock & roll,” declared singer-guitarist-producer Chris Goss during his set with the night’s ringmaster. Grohl and drummer Brad Wilk of Rage Against the Machine (and now Black Sabbath) followed him into the overlapping guitar grind of “She Got Me” by Goss’s Masters of Reality.

The night began with the Foos backing up Alain Johannes on the soundtrack’s “A Trick With No Sleeve,” a growling folk tune with an electric guitar shimmer, and Grohl banged his head to the misty-mountain-hop riffs. Johannes is a highly respected L.A. bandleader (Eleven, What Is This? etc.), producer, songwriter and sideman. He’s been a member of Queens of the Stone Age and touring guitarist with the supergroup Them Crooked Vultures; last night he led the Foos through QOTSA’s “Hangin’ Tree,” a brooding, driving, shape-shifting song he co-authored with Josh Homme.

Grohl sang harmony and was effussive with praise for the multi-instrumentalist. “I love you, Al,” Grohl said to Johannes. “Thank you for playing music with me. You’re a fucking genius.”

The night turned to first-wave L.A. punk rock with Fear’s Lee Ving, opening his set with a blazing harmonica wheeze before growling his signature “One-two-three-four! One-two-three-four!” at hyper-speed. With the Foos (and Johannes on bass), Ving ripped into the soundtrack’s taunting “Your Wife is Calling.” Soon the band was pounding through Fear’s “I Love Livin’ in the City,” with Hawkins on jackhammer beat.

Foo Fighter guitarist Pat Smear, whose snarling early punk band the Germs came from the same underground L.A. scene, raised a fist as Ving snarled, as only he can, “This is an old-fashioned sing-along.”