As Grohl explained on the episode – airing in two parts this Sunday at 6 p.m. EST and Thursday, September 14th at 2 p.m. EST – it began with a phone call from SNL producer Lorne Michaels. “He said, ‘Well, look, I’m working on the season finale and the host is going to be Mick Jagger.’ And I’m like, ‘Oh, my God, that’s amazing.’ He goes ‘Yeah, he’s nervous about it. He’s never hosted before. And so this is his first time.'”

What a Foo Believes: The Sweet Life and Rock & Roll Faith of America's Biggest Band

Grohl wanted to help but realized he had a gig the same night as the broadcast, and his manager told him he wasn’t allowed to cancel the show. So they took a helicopter. “We soundchecked or whatever, flew over, did a two-and-a-half­–hour gig and flew back and jammed with them,” he said. “And then since it was the season finale, they were having a party out in that square with the ice rink right next door or whatever and they’re like, ‘Would [Foo Fighters drummer Taylor Hawkins’ cover band] Chevy Metal play the party?’ So we’re like, ‘Yeah.’

“We said to Mick, ‘Hey, would you wanna come up and maybe do “Bitch” with us?'” he continued. “And he was like, ‘Yeah, we’ll see how it feels.’ And then the party starts and we see him and we’re like, ‘Pleeeease, Mick Jagger,’ and he came up and did ‘Bitch’ and it was amazing. He was so on it and the audience was like, ‘Oh, my God,’ and we just go straight into ‘Miss You’ to make sure he doesn’t leave the stage and it was nuts because you don’t realize how Mick – he’s super cool. He’s a great guy.” 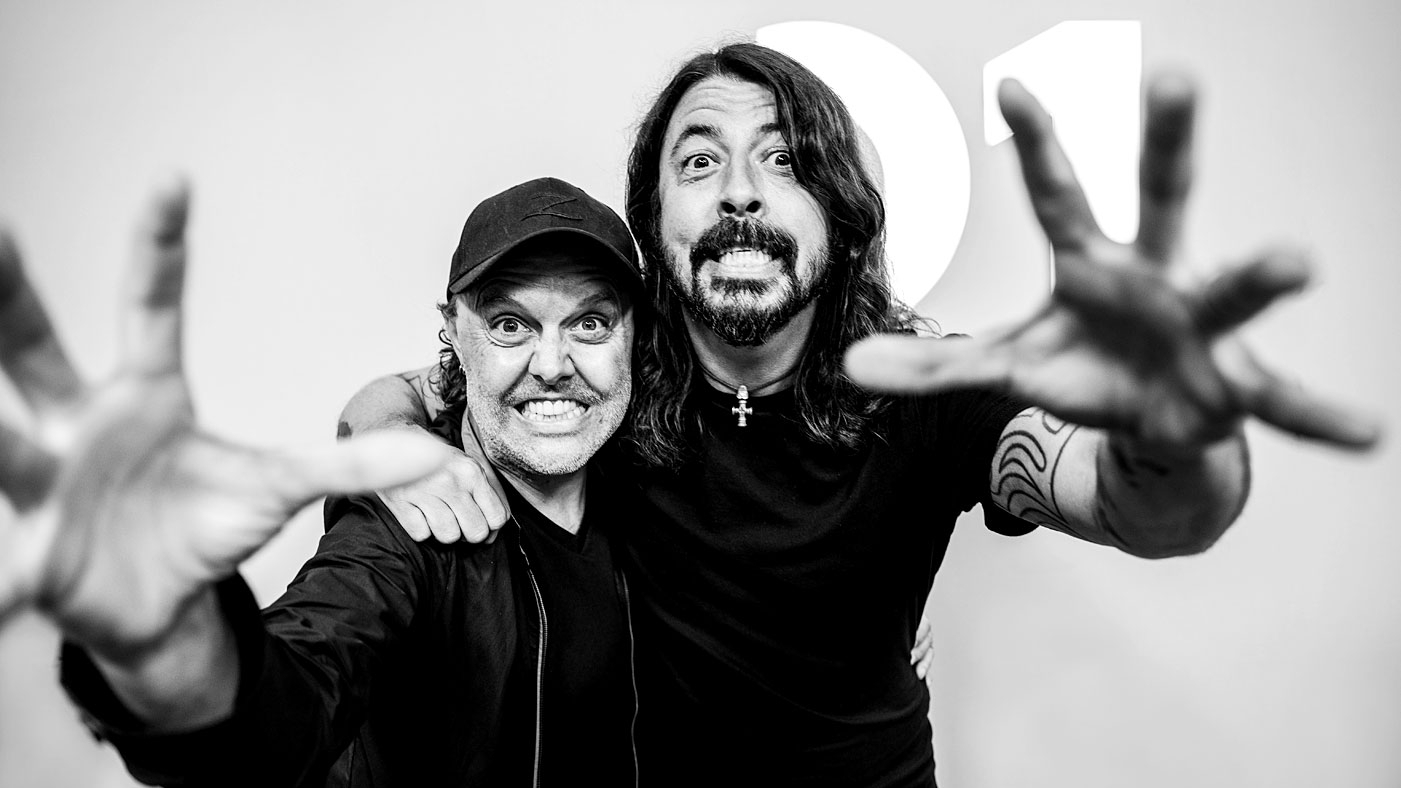 Ulrich and Grohl also talked about the Foo Fighters frontman’s stint in Them Crooked Vultures, Grohl meeting Lemmy Kilmister, his run-in with Liam Gallagher and swapped stories about Paul McCartney.

Grohl recalled how they recorded “Cut Me Some Slack” with the former Beatle for Grohl’s Sound City film soundtrack. It went so smoothly that Grohl remarked to McCartney, “Why can’t it always be this easy?” “And he said, ‘Uh, it is,'” Grohl said. “And I was just like, ‘Dude. For you, Paul McCartney.”

Ulrich’s encounter with the former Beatle was less “easy.” He was at an event where Bono and the Edge were playing, and there was an empty drum kit and bass onstage. “I’m like, ‘This is my chance to drum in U2 with Bono and the Edge,'” he recalled. “And I start building up the courage. I’m standing at the back hoping nobody will see me, and I’m going to start walking up and right as I start this other guy is five feet ahead of me and walks up, and I can’t see who it is. And then he goes up and sits behind the drum kit up there, and it’s Paul McCartney. I say, ‘Wait a minute. I’m supposed to play drums in U2. That was my shot!’ Then I ran screaming out of there and haven’t been back since.

“But [McCartney] is a great drummer,” he continued. “He had a great pocket. It was super cool. They did a couple of songs and it was Bono, the Edge and McCartney on drums it was crazy. It was so cool because there was no phones allowed … and it was just something that existed in the people’s minds that were there.”