After years of rumors, premature announcements and even disagreements over what to call the thing, Crosby, Stills, Nash and Young are finally ready to release a box set of live recordings from their 1974 reunion tour. CSNY 1974 hits shelves on July 8th in a variety of formats, including a 3 CD/DVD set, a Pure Audio Blu-Ray (192kHz/24-bit) and a 16-track single CD. Many of the sets will have a 188-page booklet, and there will also be a limited edition set of 1,000 copies featuring a coffee table-sized book and six 180-gram 12” vinyl records. A pre-order of CSNY 1974 will be available next week on the band’s website.

The set was produced by Joel Bernstein and Graham Nash. “This is the most difficult project I’ve ever done in my recording life,” Nash tells Rolling Stone. “That’s largely because of other people’s agendas and trying to please four people at the same time. It only took us a year to actually do the physical work, but it took three or four years to get that work together.”

One issue they faced was Neil Young’s intense focus on audio quality. “Neil Young, God bless his cotton socks, has always wanted the audio to get as close to the recording experience as possible,” says Nash. “He wanted us to do it in 24/192, and that’s what we did. Of course, that happened one-third of the way into the project, so we had to redo an awful lot of stuff. But it sounds totally amazing. There’s 40 songs and they’ll show people that we were a very, very decent rock band.”

Crosby, Stills, Nash and Young’s 1974 reunion trek was one of the most ambitious tours attempted up until that point. They played 30 shows at American arenas and stadiums as well as one gig at Wembley Stadium in London, with the group playing upwards of 40 songs over a four-hour period during some shows. “It was a very challenging tour,” says Nash. “We tried to keep our spirits up and keep ourselves focused as a band, but with all the chaos going on and the distractions and the drugs, I’m amazed we got away with what we did, quite frankly.”

Nine of the shows were professionally recorded on multi-track tapes. “We wanted the best performances of each song for this collection,” says Nash. “So Joel and I listened to every single minute of the multi-track shows and chose the best. We’d take, say, the best performance of ‘Almost Cut My Hair’ and send it to David [Crosby] for his approval. We did the same with Stephen [Stills] and Neil.” You can listen to an exclusive stream of “Almost Cut My Hair” below.

The bonus DVD features eight songs filmed at the Capital Center in Landover, Maryland and Wembley Stadium. “The Capital Center was the one place back then filming concerts,” says Nash. “We didn’t even know they were doing it. It’s a little funky-looking because we didn’t light it for film or television, but I picked eight songs I thought were very representative of how we were then.”

The tour came at a time when Young was writing songs at a furious pace, and he often tried out new material on stage, playing some songs only a handful of times. CSNY 1974 preserves such rarities as “Love Art Blues,” “Pushed It Over The End” and “Don’t Be Denied.” The rarest track is “Goodbye Dick,” a song they played August 14th, 1974 at the Nassau Coliseum, just five days after President Richard Nixon resigned in disgrace.

“Another reason for the delay is that I kept finding stuff that I didn’t want to take off,” says Nash. “‘Goodbye Dick’ happened in about a minute and a half, and then it was gone. I came upon it and said, ‘We’ve got to put this out.’ It’s tied so closely to the times of Watergate. When I heard Neil singing, ‘Goodbye Dick’ I just loved it.”

Despite the fact it draws material from multiple nights, Nash and Bernstein structured it like a typical show from the tour. “I wanted people to experience the show,” says Nash. “We wanted to give people a seat in the 10th row in the middle so they can sit back and enjoy the show. It starts with an electric set and then we did an acoustic set, sometimes with bass and drums and sometimes not, and then ended up with a kick-ass last electric set.”

Crosby, Stills, Nash and Young reunited to play last year’s Bridge School Benefit, but they haven’t toured since the summer of 2006. Might they hit the road again someday? “I know that when we sing with Neil we make great music together,” says Nash. “That’s the secret of it. It all comes down to the music. I also think we might be one of the original groups from back then that still has all the original members, so anything is possible in the future.” 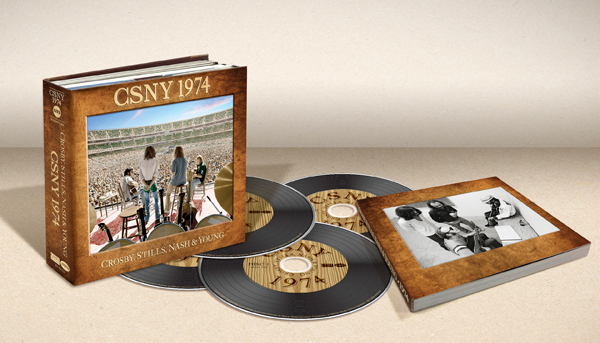 Here is the complete track listing for CSNY 1974.