Last week, hundreds of bands came to New York to play in the city’s biggest (and tiniest. . . and smelliest) venues. Why was that week different from any other week? Because some attendees had laminated badges dangling from their necks marking their participation in CMJ’s annual Music Marathon. We hit the clubs and private parties to hunt down the 10 artists who delivered the goods best. Some were new to us; some will be new to you. Enjoy:

Speedy Ortiz: The Western Massachusetts fuzz-pop brigade did a slew of excellent shows all week, fresh off one of the year’s best rock albums (Major Arcana) and singles (“Taylor Swift“). Sadie Dupuis runs down the perils of young-adult romance, the highs (“I got too many boyfriends to see you tonight”) and lows (“You picked a virgin over me”), over guitars straight from the V section of the Nineties bin, right in the sweet spot between Velocity Girl and Veruca Salt. Introducing a new song at Williamsburg’s 285 Kent, Dupuis warned, “This is a song we’ve literally never played before. So we’re gonna blow, and you’re gonna blow along with us.” But it didn’t blow at all. ROB SHEFFIELD 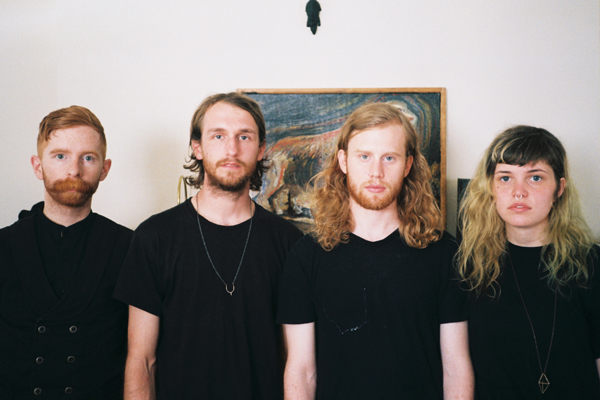 Saintseneca: Most new folk revivalists come on like genial bartenders (Mumford & Sons) or oddball solipsists (Will Oldham’s offsprings). This Columbus, Ohio, quintet split the difference, channeling struggles that make you feel partway between eavesdropper and audience. Rocking a monk’s tonsure and antebellum moustache, in a dark vest, shirt and slacks, frontman Zac Little represented like an introverted backwoods preacher under Cake Shop’s low basement ceiling, singing about acid rain and dying young in a cracking, nasal tone that was addictively tart. Huddled around two mics, his bandmates (notably key foil Maryn Jones) delivered hollered harmonies that felt more like collective bloodletting than sing-along-shilling bonhomie, and more potent for it. They have an LP out in April on Anti-, and it’s a gem. WILL HERMES 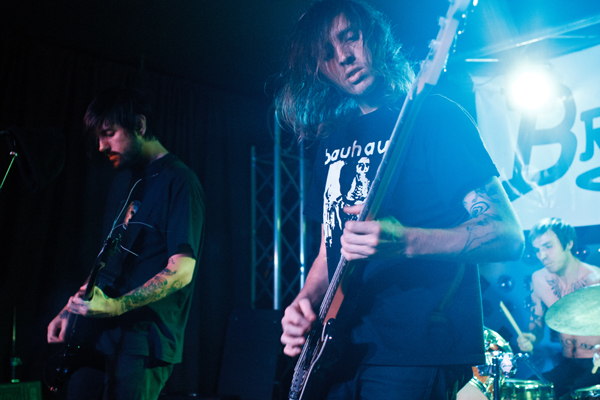 Nothing: Philadelphia’s Nothing delivered one of the loudest sets at CMJ, pulverizing Williamsburg’s Baby’s All Right and forcing casual attendees to stand back (or, at the very least, locate ear plugs ASAP). The recent Relapse Records signees owe much to Deafheaven, the buzzy black metal act responsible for popularizing shoegaze in the genre. Like many noise projects, they seemed to be performing for the sake of performance, teetering between moments of brash transcendence and misguided ambience (albeit, with a series of recoveries.) Whatever the case, the band is definitely something worth watching. MARIA SHERMAN 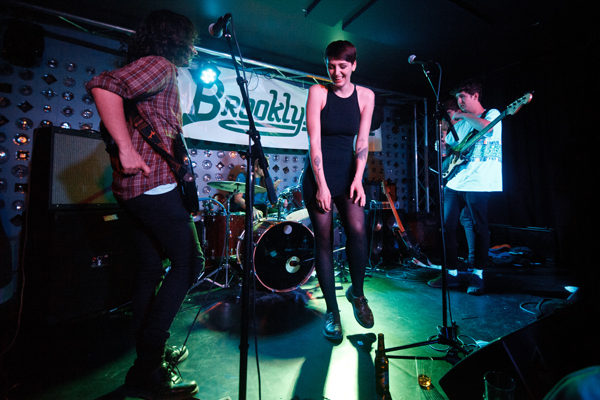 Joanna Gruesome: A Welsh crew that mixes the sugar rush of the Ramones with the salt-in-wound sizzling of Sonic Youth, with a name that might just be goofing on a certain harp-playing singer-songwriter. The maelstrom’s semi-calm eye is frontwoman Alanna McArdle, who shifted from twee-pop scholar to screaming riot-grrrl banshee in front of a packed room. And her band really knows how to rock a 30-minute showcase, jumping into the crowd with instruments for a moshing, feedback-soaked finale. If you’re curious, the charmingly scatological video for their aptly named “Sugarcrush” sort of sums up their aesthetic. WILL HERMES 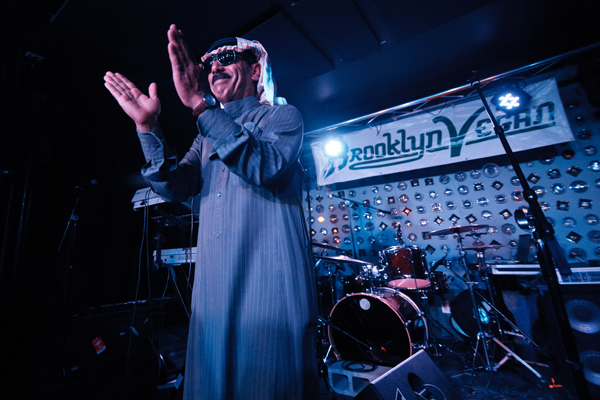 Omar Souleyman: Omar Souleyman has gathered something of a cult following outside his native Syria, and his set at NPR’s Showcase Wednesday demonstrated why he’s such an arresting performer. Standing expressionless, dressed in all black, sporting deep sunglasses, Souleyman rarely moved. He clapped calmly and intentionally as his Arabic new wave moved audience members to dance. He created an incredible tension — one that wasn’t lost on the die-hard Pusha T fans that made up most of the crowd. For everyone, it was a chance to get lost in a new kind of reverie. MARIA SHERMAN 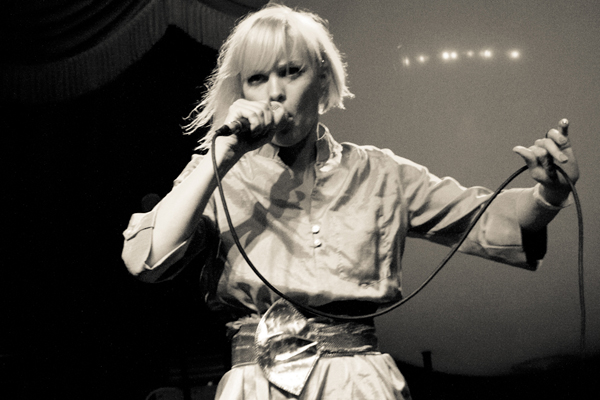 Conway: Conway launched her CMJ experience with a packed kick-off show at Brooklyn Bowl. A few days later, at the more intimate Littlefield, she unleashed an enthralling performance, showcasing the energy and passion captured in her self-made “Big Talk” video. Her stage presence and style brought to mind an unholy mix of Karen O and Ke$ha, as Conway led her band through her ninth-ever show. Her viral single was clearly the highlight, but like the best kind of showcases, it left you wanting more. MIKE SPINELLA 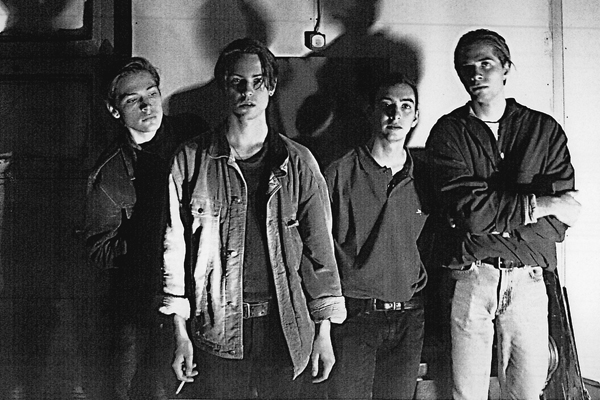 Iceage: The Danish hardcore princes played a couple of (technically non-CMJ) shows at the Bushwick bar Acheron, with singer Elias Bender Rønnenfelt pouting and moaning like a young Mick Jagger, preening in his natty leather coat while blowing a kiss to the slamming kids in the pit. Iceage did songs from their recent You’re Nothing (the one where he wails “pressure, pressure, oh God, noooo” is a real crowd-pleaser) plus even better new songs. They opened both sets with a most unlikely cover: “Jackie,” a deep cut from the first Sinead O’Connor record, which they retooled into a barely recognizable blast of Euro bootboy angst, as well as a timely reminder that you can’t spell “skinhead” without Sinead. ROB SHEFFIELD 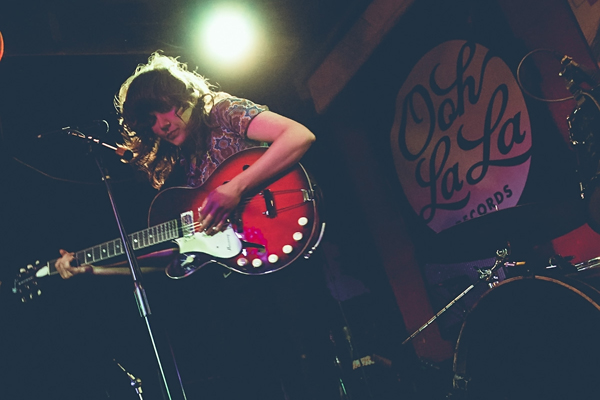 Courtney Barnett: Barnett is a storytelling twenty-something singer/songwriter from Melbourne who writes matter-of-fact tales that unspool like barstool revelations and sound like some hybrid of Kimya Dawson and Kurt Cobain. Barnett has two EPs, I’ve Got a Friend Called Emily Ferris and How to Carve a Carrot Into a Rose, and was worth seeing twice (once with a full band, once solo). Best songs: “History Eraser,” about getting drunk, listening to the Stones, and touching “a little tongue” with a dude she’s obsessed with; and her set-closer “Avant Gardener,” about an anaphylactic panic-attack in the midst of an Australian heat wave. But it’s fun. Really. WILL HERMES 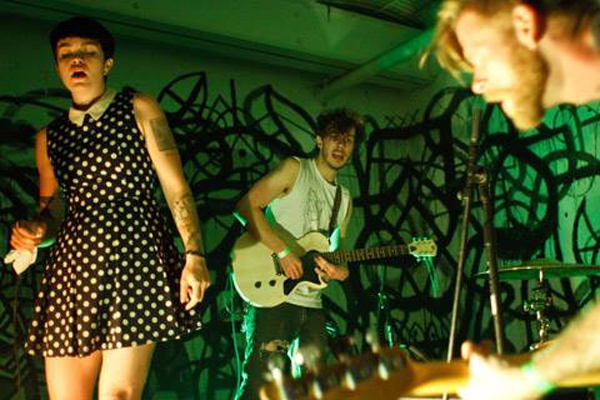 Perfect Pussy: If you walk away from one of this band’s shows without at least a few bruises, you’re doing it wrong. These punk kids from the mean streets of Syracuse, New York, deliver high-energy slabs of mayhem-friendly post punk noise, a wall of guitar and Casio. Meredith Graves knows how to run her mosh pit like a dictator runs a birthday party. Despite the low-fi buzz of their terrific debut cassette I Have Lost All Desire for Feeling, they’re a full-blooded beast live, and they whipped 285 Kent into a frenzy. “This is the longest set we’ve ever played,” Graves announced cheerfully, after about 10 minutes.  ROB SHEFFIELD 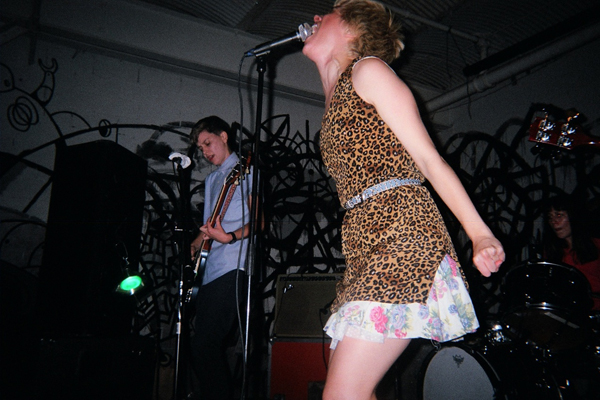 Priests: Priests want you to know that if you’re not pissed off, you’re not paying attention. Their only CMJ showcase was sponsored by Doc Martins, something the band was very vocal about — at one point they half-comically threw vegan burritos into the audience. The highlight of the evening was “Leave Me Alone,” a feminist anthem in the making whose lyrics seethe with sexual harassment themes: “I see you out on the street / I see you in every single person that I meet / And you wanna know what I think? / I think you look like a creep.” This is new queer punk at its most revelatory: political and catchy as all hell.  MARIA SHERMAN