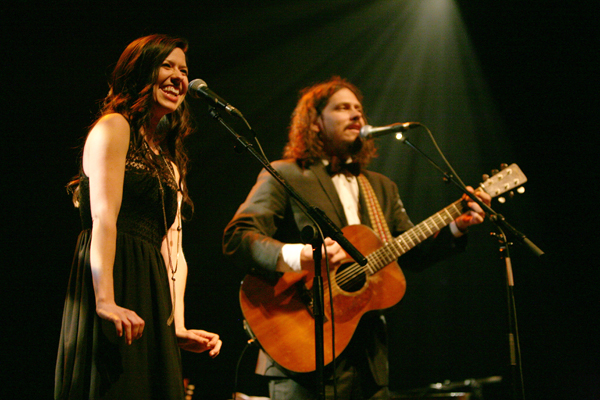 Folk-pop duo the Civil Wars will headline the T-Mobile Presents Google Music Series, a string of gigs at the TAO Nightclub in Park City, Utah during this year’s Sundance Film Festival. The Civil Wars will perform on Monday, January 23rd with support from Feather and Belle. Bad Rabbits and Fort Lean will play on January 20th, Vintage Trouble and the Whigs on January 21st and G-Side and Chancellor Warhol on January 22nd.

This won’t be the Civil Wars’ first experience playing at the prestigious film festival. “We had a wonderful time [at Sundance] last year,” singer and guitarist John Paul White tells Rolling Stone. “We saw some great movies and old friends, met some new friends and whiskeys. We thoroughly enjoyed playing the ASCAP stage with other artists we really dig. It makes sense that we would enjoy the festival – there’s a certain kinship to what we do as independent artists. The perspectives are the same. It’s inspiring.”

The duo, who recently recorded a song with Taylor Swift for the forthcoming Hunger Games soundtrack, have a longstanding interest in film music. “I had – and still have – a lot of favorite soundtracks,” says singer Joy Williams. “I fell asleep almost every night as a kid to the Sense and Sensibility soundtrack. I also owned the Braveheart soundtrack, and I remember being moved by how the music blended so perfectly with the film. It made me want to score a film one day.”

Williams was also a big fan of the soundtracks for Empire Records, Forrest Gump, Reality Bites and Garden State. “All of those soundtracks were on steady rotation after seeing the films,” she says. “Nowadays, The Hours soundtrack by Philip Glass and Yann Tiersen’s soundtrack for Amelie, as well as Clint Mansell’s soundtrack for The Fountain, have been playing often in my house.”

Though Civil Wars are still promoting their debut, Barton Hollow, White has his mind on recording a follow-up soon. “Hopefully we stick to our guns and make a record with one criteria – pleasing ourselves,” he says. “The only thing we can control is whether we like it or not. We have to let the chips fall where they may when it comes to other opinions of it.”