Cheap Trick guitarist Rick Nielsen is rarely speechless, but the news that his band got into the Rock and Roll Hall of Fame briefly left him unable to find find words. “Usually I’m a man of many words, but this has got me in a tizzy here,” he says on the phone. “I’m verklempt. I don’t know what to say. It’s very exciting.” The moment passed quickly, and soon enough he was chatting about the induction ceremony, a possible reunion with original drummer Bun E. Carlos and why Cheap Trick will never stop touring.

How are you doing?
I’m a little jet-lagged, though I have permanent jet lag. I was in Italy on Thursday. I was in London on Friday. I was in Chicago on Saturday. Sunday I was in Nashville. Now I’m in Los Angeles. Every other year, I spend Thanksgiving in England with Dave Clark from the Dave Clark Five and a bunch of other people.

Congratulations on the Hall of Fame.
Yeah. I heard about it last night. I actually heard five minutes before I heard I was doing an interview with you. You probably knew before I did.

Who told you the news?
It was people from the record company who said, “Congratulations. Don’t tell anybody.” I don’t think I’ve gotten any official thing. I need to see a signed paper.

I can assure you it’s true.
Wow, that’s fantastic.

Your first reaction?
I was prepared to not get it and say, “Oh, well, better luck next time.” When I was with Dave Clark, he told me all about what happened with him and how Tom Hanks inducted them. He said, “I voted for you five times.” That was pretty funny. A bunch of other people told me they voted for us, like Little Steven. I find out now I had more friends than I thought I did.

Do you care that it’s taken so long?
Not at all. We have nothing to do with it. We have fans from all over the place. Some people from Rockford, Illinois, drove 10,000 signatures to Cleveland. When people would ask me, I’d say, “It’s totally out of our hands.” I appreciate that people thought enough about us to spend their time on our behalf.

Did they tell you any details of the night?
I have no idea about anything.

Ok. It’s going to be at the Barclays Center in Brooklyn.
Let me get a pen. I want to write this stuff down. You’re my guy! I don’t know anything.

Are you a fan of those groups?
Oh, yeah. We toured with Deep Purple a number of times. Chicago, duh! Steve Miller actually gave me a guitar 10 years ago, and I have one for him. Maybe I can bring that guitar and finally get it to him. And N.W.A? How about that?

There tends to be a big all-star jam at the end of the night. Is there a Cheap Trick song that can work for everybody?
Well, how about Deep Purple doing “I Want You to Want Me” with Chicago’s horns and Steve Miller doing the solo and N.W.A turning it into the “Walk This Way” Aerosmith combo? Everyone in the world knows that song. 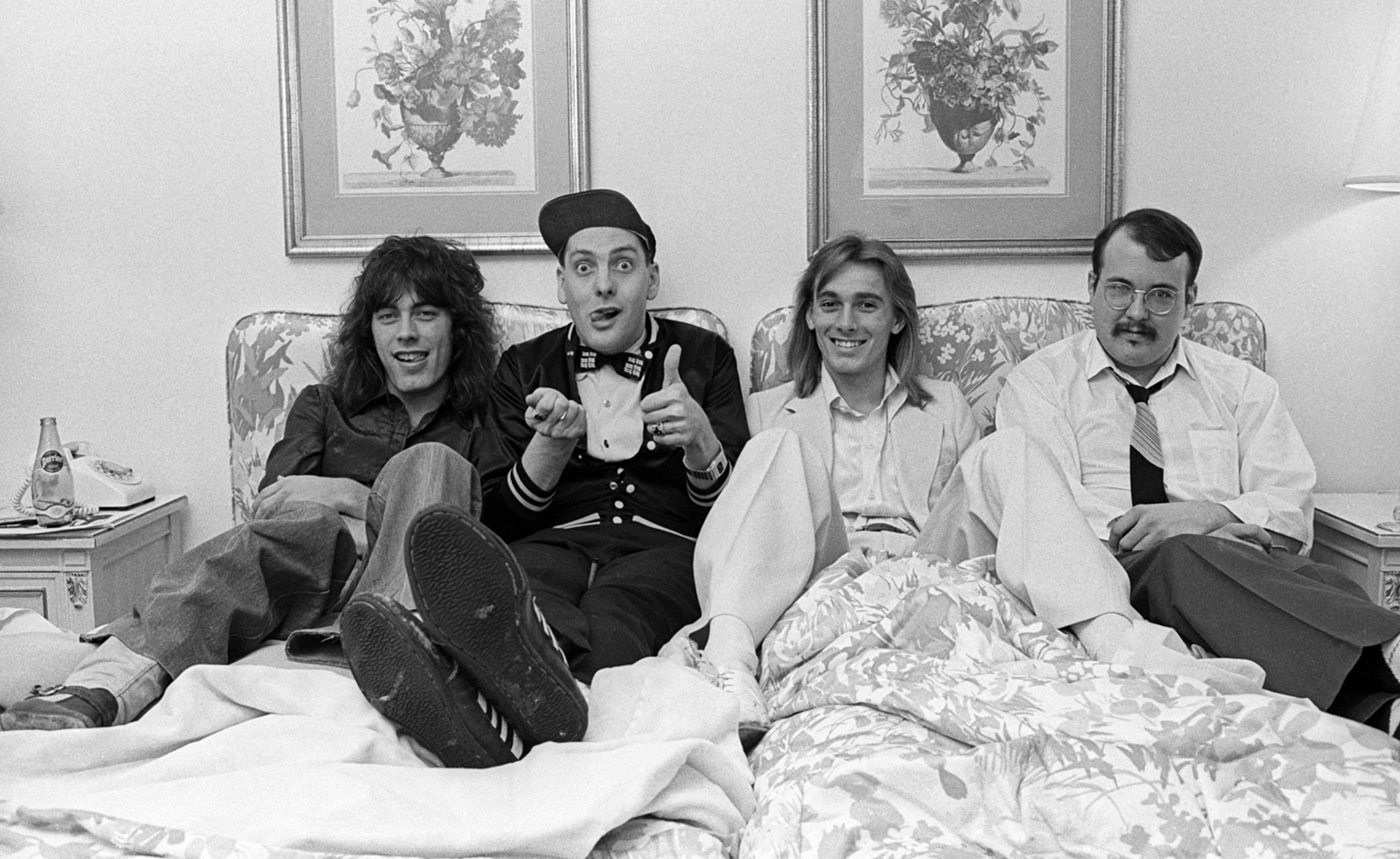 Bands usually reunite at these things. Do you guys think you’ll have a chance to play with Bun E. Carlos?
I’m sure he’ll be invited. My son Daxx has been playing with us for the last five years, but this is all about our history and, the way I look it, our future. We’re Cheap Trick. We’re too dumb to quit. We’re still out there slogging it out.

Will Bun play drums that night, you think?
Umm … I’m sure he’ll be invited. Do I know if he will? I don’t know. Why not? Here’s a true story. When we got signed originally to Epic in 1976, Bun had broken his arm and we had two drummers. We were signed with two drummers. Bun E. had his arm in a sling and there was Hank Ransome. We got signed as a five-piece band. It was funny because Columbia had come to see us, and the night they came, Bun fell and broke his arm. The night they signed us we had two drummers, so why not have two drummers? How about that?

“People are like, ‘Why are you playing that five-neck guitar?’ I want to hurt. I want to play.”

I’m always amazed by the number of shows you do per year. What drives you to tour that hard?
I’ve taken all the mirrors out of my house because when I’m playing onstage, I feel like I’m still in high school. I feel like that kid that wanted to play in his first band, and then I look in a mirror and it’s like, “Uh-oh!” It ain’t pretty. I love to play. The touring, the travel and stuff gets hard. I just got my 3 millionth mile on American, and that’s one airline. I feel all 3 million miles, and that’s just in the air. That’s not riding around in a van or a leased train or all the other great airlines we have.

Do you think the day will come when you’ll want to stop because it’s just too painful?
I love to play. We don’t just go through the motions. I still beat myself up. People are like, “Why are you playing that five-neck guitar?” I want to hurt. I want to play.

Do you see this as one of the top honors in your entire career?
Live at Budokan wasn’t too bad. Getting our first record wasn’t too bad. Doing 5,000 shows, not too bad. Having Thanksgiving dinner with Dave Clark, not too bad. Talking to you, not bad. It’s all good. This might get moved right to the top of our résumé, though. We won’t write this at the bottom.

Sounds great. … See you in April.
Great. When anybody asks where I heard about this, I’ll say, “A guy named Andy Greene told me. Never heard of him? It’s Greene with an E at the end. He’s the three-E Greene.”