The kinds of tracks that seem to be Charli XCX’s bread and butter are these gothic stadium stompers – drums blast into the void as blood red-tinted synths rumble, swoon, pierce or shimmer – that simmer with bubblegum and Top 40 melodies. Last night the nearly 20-year-old British singer took the stage at New York City’s Bowery Ballroom to perform a handful of those tracks and lead one of the more peculiar kinds of dance parties, where sheer joy collides with doom and gloom. Which ain’t a bad thing. Few things more effectively fend off apocalyptic heartbreak and down-a-deep-dark-well despondency than dancing them into submission.

Not that Charli XCX didn’t get some help from co-headliners St. Lucia, who warmed the crowd up with an airtight set of bouncing pop cuts from their debut EP and upcoming first album. Fronted by Jean-Philip Grobler (a Johannesburg, South Africa native now living in NYC), the five-piece use the AM radio shuffle of the late Seventies and early Eighties as a springboard for earworm synth pop (keys courtesy of Patricia Beranek and Nick Paul) flecked with grooving guitars (Grobler), fatty basslines (Ross Clark), and vocal harmonies from Grobler and Beranek. Drummer Nick Brown kept the band and audience moving and grooving as St. Lucia eased through the jaunty “Before The Dive” and “Closer Than This,” with its chilly pop cheer. On standout “All Eyes On You,” the band brought out saxophonist Max Ruby to wail away, much to the crowd’s delight. He returned later on new cut, “The Way You Remember Me,” another infectious thumper that Grobler belted out, a sweetness in his voice that knocks you over with its pure power. 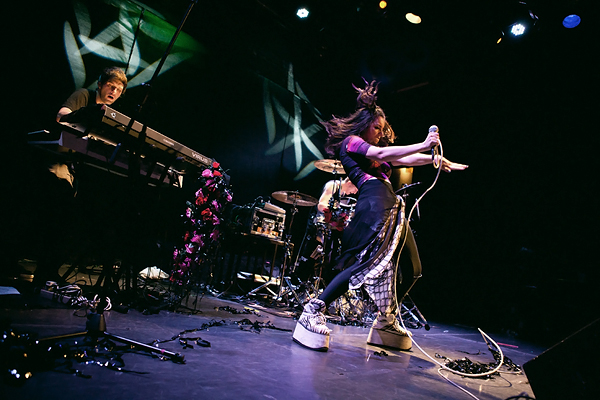 With things already buzzing, Charli XCX’s two-piece backing band – their drum and synth set-ups laced with red and pink roses – took the stage, kicking things off with “Feel My Pain.” Its Psycho-stab synth and industrial drumming sent titters through the room, and then XCX rushed out, long black streamers clutched in her fists, and tore through the track’s sinister verse and sultry sweet chorus. A few minor kinks were tweaked early on, but it was smooth sailing soon enough, XCX asking the crowd about her 50 Cent chain (“It’s cool right? I think it’s cool.”) before launching into the angsty agro lurcher “How Can I.”

Though her debut album is still in the works, Charli XCX performed like a pop star already headlining arenas: Her tortured but hardly wounded alto never wavered on breakout ballad “Stay Away,” while an air of tragic consequence tinged her delivery of “You give yourself to hell” during her cover of Echo and the Bunnymen’s “Killing Moon.” While perhaps not all Charli XCX cuts are created equal – there’s something a tad tiring in the repetition of “End of the World” or “How Can I” – the ones that stand out do so for good reason. She crooned on top of a sample of Gold Panda’s indelible “You,” sent all of Bowery into a frenzy with “Nuclear Seasons,” and brought the world down on “Grins,” (from her mixtape Heartbreaks and Earthquakes), a cut produced by Blood Diamonds with synths that soar in catastrophic bliss. The night ended with “You’re The One,” ostensibly the first single from Charli XCX’s debut, and this time she put her foot down: “Everyone’s gotta fuckin dance,” she decreed. Watching her jump and flail around – a bonkers freeform style that seemed part hardcore mosh pit fist work, part hip-hop posturing, and part all night alone in your bedroom dance-a-thon – it was hard not to obey. 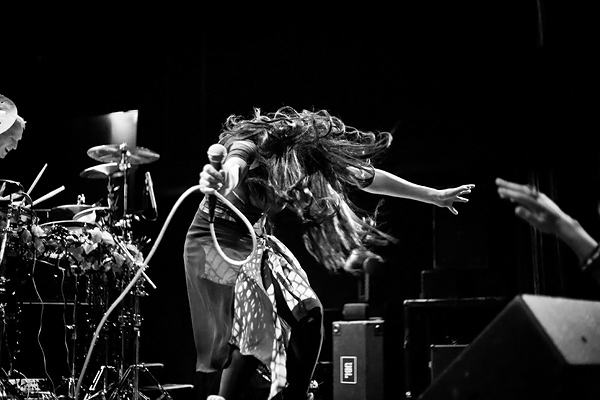