Chance the Rapper announced on Monday that he will donate $1 million to the Chicago Public Schools Foundation “for arts and enrichment programming.” The announcement came at a press conference held at Westcott Elementary School in the Grammy-winning rapper’s native South Side neighborhood of West Chatham, during which he presented an oversized check to students flanking him on both sides.

The announcement comes days after the Coloring Book rapper met with Illinois Governor Bruce Rauner to discuss what he believes is a lack of state funding directed towards the Chicago Public Schools (CPS) systems. “The governor gave me a lot of vague answers in our meeting and since has called me over the weekend,” Chance told a group of reporters and students gathered on Monday. It’s a sentiment he shared minutes after his talk with Rauner on Friday, when he told the Governor, via reporters, to “Do your job!” “Our talks were unsuccessful,” Chance continued. “Gov. Rauner still won’t commit to giving Chicago’s kids a chance without caveats or ultimatums.”

Chance’s efforts principally stem from Rauner’s veto of a bill that was set to delegate $215 million in funding to CPS, “an important compromise on behalf of the schools and the students across the state,” Chance noted. As a result, CPS may have to lay off thousands of staff or, as Chance passionately explained, even cut the school year short by 13 days. “This means over 380,000 kids will not have adult-supervised activities in June and could possibly be put in harm’s way,” he explained.

Chance the Rapper to Illinois Governor: 'Do Your Job'

The rapper said his $1 million donation was made possible through ticket sales for his upcoming spring tour and a joint effort between concert promoters (including Live Nation, AEG and Ticketmaster) and local venues and promoters across the country. The rapper did not give specifics on how the money would be raised, but noted that the aforementioned companies “were able to band together to use funds from ticket sales to donate to CPS.”

On top of the rapper’s $1 million, Social Works, a local non-profit organization Chance created last year, will match every $100,000 raised for the CPS with an additional $10,000 to be allocated for specific Chicago public schools. (The charity has set up a website to receive donations for CPS.) In light of the $1 million donation, Chance will give out 10 additional $10,000 donations to select local schools, including Westcott Elementary. 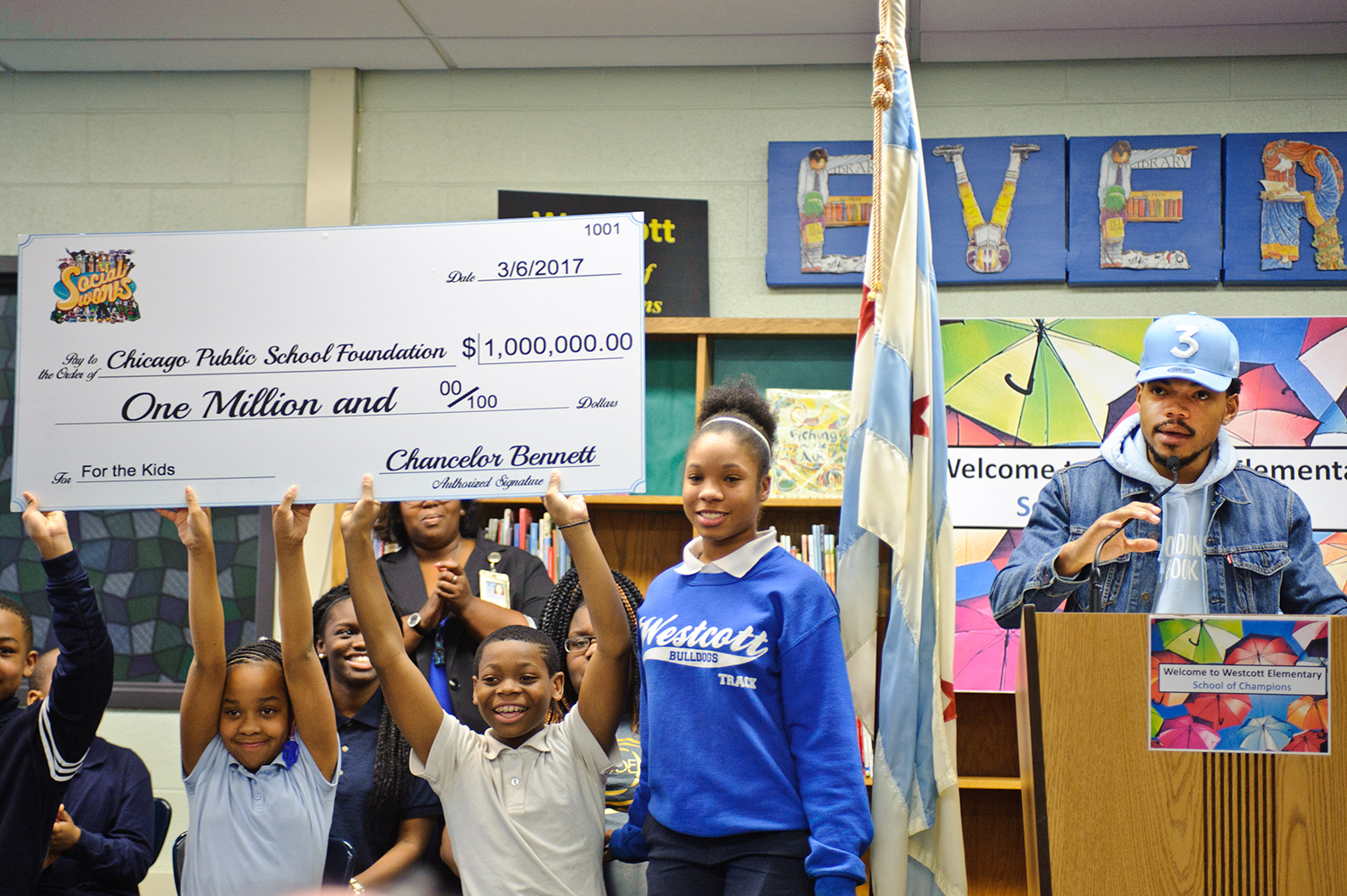 As the Chicago Tribune noted, Rauner submitted two proposals earlier in the day to help fund $215 million for CPS: one that would “[tie] the money to passage of a larger overhaul of the state’s pension retirement program,” and another that would allow Mayor Rahm Emanuel to draw from Chicago’s tax increment financing funds. The rapper declined to comment on Rauner’s proposals.

Chance urged others to join in his fight to “take care of [Chicago] kids. With the stroke of the pen, the governor has the power to change that,” he said. “This isn’t about politics. This isn’t about posturing. Everybody and they momma knows about what’s going on in Chicago,” he said referencing the record-high murder rate. “It’s constantly talked about. But we’re about to enhance the conversation. As a private citizen, as a parent and as a product of CPS, I’m asking that you guys join and fight with me, organize with me, mobilize with me, for the interest of the children of Chicago. This is the very beginning.”

The battle over CPS funding has been raging for more than two years, largely fought between the Republican Rauner and Democratic State Senate President John Cullerton. Illinois has not approved a full budget in two years, but the legislature has enacted several stopgap measures to keep Chicago schools in session.

At his press conference, the Grammy-winning rapper noted he’d been in contact with other Chicago celebrities, including Common, to discuss what can be done to help CPS. Though, as he noted, he’s “not a politician. It’s not my job to propose any policy.” His responsibility, as he sees it, is “to make sure the children have the resources for a quality education.

“Governor Rauner would like for the narrative of this conversation to be that our conversations were to help find a way to subsidize funding for CPS,” he added. “That’s not what’s going on. I want them to fund CPS.”