“American Idol” has held songwriting competitions before–the Season 6 and 7 coronation singles were penned by contest winners, and two years ago, the show launched the “Coca-Cola Perfect Harmony” program, which enlists fans to help pen a new, original tune to be performed by a pop star on each “Idol” finale. Taio Cruz participated in the program in Season 10; last year’s “Perfect Harmony” pop star was Jason Derulo; and this season’s just-announced participant is Carly Rae Jepsen. Carly’s involvement is an especially interesting full-circle moment, since she got her first big break via the “Idol” machine, placing third on “Canadian Idol” in 2007.

“It’s really crazy to me,” Carly tells Reality Rocks. “I was on ‘Canadian Idol’ back in the day, so it’s going to be very strange. I would’ve never thought, auditioning for ‘Canadian Idol’ way back when, that one day I would be on the season finale of ‘American Idol’! It’s very, very cool to me! It’s just amazing to be part of the whole ‘Idol’ thing.”

The interactive program, which runs through May 14, will allow “Idol” fans ages 13 and older to help Carly write lyrics to complete her new tune. “I had three days off in the Bahamas. I put myself up in the hotel room and I wrote three different versions of a song called ‘Take A Picture,'” Carly explains. “And basically the idea is we’re gonna submit all three versions–I’ve recorded all three versions at this point–and then the fans get to vote on their favorite one. It’ll be really interesting, because I definitely have my favorite pick; I know the one I think is the keeper. But we’ll see which one I get, which one they like. I’m interested to see how it turns out.”

But what if fans vote for the version she likes the least? “I’m gonna protest, I’m just not gonna sing it!” laughs Carly. “No, I’m kidding! No, luckily I like all three versions of this song. I’m an opinionated woman. I do have my pick, my favorite. But I am very hands-on, very involved. We picked three versions, so it’s all stuff that I felt was really my jam, for sure. And whatever option happens, it’ll be like one of those ‘Choose Your Own Adventure’ stories–it kind of feels like we’re doing that with the song. It was a little scary at first, but it’s actually rather exciting. So we’ll see. If they don’t pick that one, it’ll be fun to sing the other ones.”

Fans will be able vote on other elements of the song’s finale performance as well, like “all different lyric options and different musical instruments, the set, the backup dancers’ outfits, the whole show,” says Carly. “It was fun; I brought my stylist, and she was really involved in designing three different themes and three different outfits for the whole thing, so it was really cool. It’s actually turning out to be one of the most massive collaborations I’ve ever done.”

It will be a massive collaboration indeed: During weeks one, three, five, and seven of the program, fans can vote for the lyrics they like best, and on the alternate weeks, they can vote for the performance’s production elements. The final result will be performed live by Carly on the first night of the “Idol” Season 12 finale, on Wednesday, May 15. 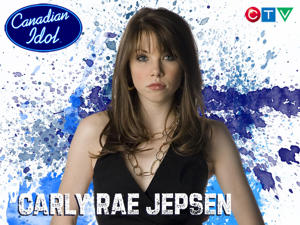 Performing on an “Idol” stage again will be an emotional experience, Carly says. “In the beginning, I remember being really nervous to audition [for ‘Canadian Idol’],” she recalls. “I think it’s such a great way for artists take the chance to showcase what they do, and it really helped my career. It’s gonna be so cool to be a part of it, and it’s going to be nostalgic in a way, too.”

For more details, go to AmericanIdol.com/PerfectHarmony.