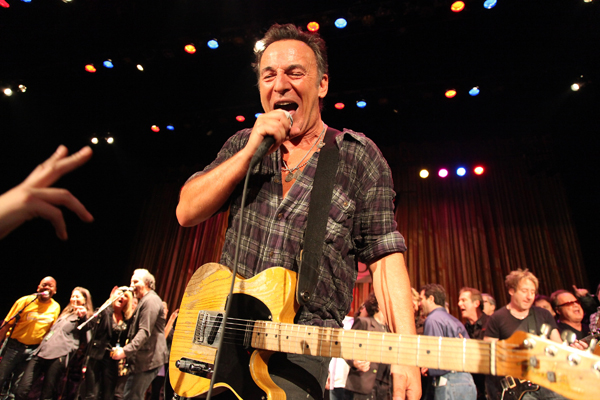 To someone passing by the Paramount Theater in Asbury Park last night, the sight of fans standing in the freezing cold, desperately pleading with complete strangers for extra tickets probably seemed a little odd. After all, the biggest names on the bill for the Light of Day Parkinson’s benefit were David Bromberg, Garland Jeffreys and Southside Johnny. They’d probably be even more shocked to learn that the face value of tickets ranged from $47 to $381, and the show sold out in seconds.

The vintage Bruce Springsteen shirts that some of the fans were wearing would be a good clue as to what was going on. Anyone who lives in New Jersey knows that anytime any artist plays anywhere near Asbury Park rumors start flying that Bruce might show up. Usually he doesn’t – but the Light of Day is a different story. He’s been to nearly every one since the benefit shows began in 2000, and since the concerts got upgraded from tiny clubs to the Paramount Theater a few years ago, Springsteen’s presence has pretty much been a guarantee. Some fans actually travel in from Europe for the show. I imagine that they did not leave disappointed.

The night began with sets by local acts RockNRoll Chorus and Lisa Bouchelle, though I didn’t get to my seat until shortly before Joe D’Urso & Stone Caravan began to play around 7:45 PM. Like many acts on the bill, D’Urso is a regional artist with a long history of playing on the Jersey Shore, but not a lot of national recognition. His energetic set featured his original composition “Noisy Guitars,” which he mashed up with The Ramones’ “I Wanna Be Sedated.” He wrapped it up with a lovely rendition of the Steve Van Zandt-penned “All I Needed Was You,” which Southside Johnny recorded on his 1991 disc Better Days.

Next up was Garland Jeffreys, a New York songwriter who cut a series of acclaimed albums in the 1970s, but never moved beyond a cult audience. His set focused on material from his new LP The King of In Between, though at the end he did break out a great cover of “96 Tears” by Question Mark & The Mysterians. “I have a special guest in from the country,” Jeffreys said shortly before wrapping up his thirty minute set. “I’d like to invite him onstage…Mr. Bruce Springsteen!” The crowd instantly jumped from their seats like they’d been electrocuted, and out came a ludicrous number of cellphone cameras. Springsteen added some tasty guitar licks to Jeffreys’ most famous song “Wild In The Streets,” which was memorably covered by the Circle Jerks in the early 1980s. You could feel the collective sigh of relief from everyone who dropped $381 on a ticket with the (well-placed) hope that Springsteen was going to show up.

John Eddie – yet another longtime Jersey Shore rocker who never quite made it big – had the difficult task of following that up. Eddie started in the 1980s recording Springsteen-like songs (even working with the E Street Band at the behest of his label), but his recent work has shifted more toward country rock. Kid Rock covered his song “Lowlife” on his mega-hit album Rock N Roll Jesus in 2007. “For the first time in my life, my rent was paid on time,” Eddie said to the crowd before playing his own rendition of the tune. Eddie deserved that windfall. He’s a great performer, and his ode to alcohol “I’m Gonna Drink You Pretty” had the entire crowd laughing and singing along.

Folk icon David Bromberg was originally billed as the headliner of the show, but after the schedule was laid out he wound up playing fourth to last. He had the challenge of doing a quiet acoustic set accompanied only by a poorly-amplified trombone player to a crowd growing increasingly impatient to see Springsteen come back out. He won them over with his incredible fingerpicking, and his mash-up of “Bring It With Me When You Come” with “Wooly Bully.”

After some filibustering by by the show’s host, Vincent “Big Pussy” Pastore, the curtain lifted and Willie Nile and his band began a blistering set. At the risk of sounding repetitive, Nile is another critically acclaimed New York rocker who released a series of well-regarded albums in the early 1980s but never managed to reach a wide audience. His original song “Cell Phones Ringing In The Pockets of the Dead” and a great punk medley of “Blitzkrieg Bop/California Sun/Sheena Is A Punk Rocker” had the entire crowd on their feet, and just when they were about to sit down, his close friend Bruce Springsteen came out to play guitar and sing background vocals on the Nile-original “One Guitar.” Nile often comes onstage at the end of Springsteen concerts, so it was nice to see Bruce return the favor.

Southside Johnny’s new group Southside Johnny And The Poor Fools were a late addition to the bill. Featuring E Street Band violinist Soozie Tyrell, the group performs stripped-down, acoustic versions of songs from Southside Johnny’s vast catalog. Classics like “Love On The Wrong Side Of Town,” “This Time It’s For Real” and “I Don’t Want To Go Home” have been performed countless times in Asbury Park, but they never sounded this quiet and mournful. Tyrell took over on vocals for a cover of the Lucinda Williams tune “Can’t Let Go,” and they wrapped up with “Trapped Again.” Springsteen co-wrote that song, but he stayed backstage during the entire set by his good buddy. Maybe Southside wanted to showcase his new band without the whole thing being overshadowed by Bruce.

The curtain rose for the final act of the night to reveal Bruce Springsteen standing alone with an acoustic guitar. For only the second time in his career, he played “Incident On 57th Street” solo acoustic. A wonderful moment like that often gets swallowed up in a giant arena, but in a tiny theater it was absolutely spellbinding. The crowd sang along to every word, and was clearly savoring every moment of the long, beautiful song. Bruce then went back into the wings and gave the stage to Joe Grushecky and the Houserockers. Joe’s story is very different from many of the previous night’s performers. Yes, he released a series of beloved albums in the early 1980s and was pegged as the “next big thing,” only to get dropped from his label and fade into obscurity. Yes, he’s a friend of Bruce Springsteen. But he’s not from New York or New Jersey. He’s from Pittsburgh. (For more on Grushecky, check out this article.)

After bringing out David Bromberg for a blues number, Grushecky kicked off his set with “East Carson Street.” It’s a wonderfully powerful song that explains why he never left Pittsburgh. “Please understand,” he sang. “The roots they run deep. I can feel this town breathe. I can feel its heart beat…It’s where I had my best times. Where I want to grow old.” It’s hard not to admire a guy who never gave up on his rock and roll dreams. He has a full-time job as a special education teacher in Pittsburgh, but he’s out playing bars and clubs whenever his schedule allows. About twice a year, however, he gets to play with arguably the single biggest rock star in the country.

The camera phones came back out when Springsteen walked onstage to join Grushecky and the Houserockers for “Darkness On The Edge of Town.” This is the seventh time that Springsteen has performed with this group since the last E Street Band tour ended in late 2009, and by this point they have the routine down cold. Bruce and Joe take turns leading the band as they alternate between Springsteen classics and songs that Joe and Bruce wrote together in the 1990s. Special attention was played to Darkness On The Edge of Town, with the group breaking out “Adam Raised A Cain” and the recently resurrected outtake “Save My Love.”

The highlight of the entire set may have been the back to back Nebraska songs “Atlantic City” and “Johnny 99.” Both are stark, depressing songs about men with “debts no honest man can pay” who are reduced to crime. But they played them both like party anthems, with Springsteen jumping on top of the drum riser, teasing the crowd with false endings and guitar solo after guitar solo. It was absolutely incredible. If the much-fabled electric Nebraska actually exists, they really should release that thing one day. The world needs a Bruce Springsteen Bootleg Series.

Before kicking into “Because The Night,” Bruce called Willie Nile, John Eddie and Garland Jeffreys back to the stage. By this point it was well past 1:00 AM and much of the crowd had been there since the show began at 6:30 PM. Nobody seemed to mind in the least, though there must have been some babysitters in New Jersey last night making a killing on overtime pay. Springsteen dove into the crowd to lead a sing-along on “Waiting On A Sunny Day,” and after the Grusecky original “Pumping Iron,” Max Weinberg ran onstage and took over on drums for the concert’s theme song “Light of Day.” Every performer from the night came out of the wings to sing along, and they stuck around for a chaotic “Promised Land.”

It was now 2:00 AM and that sure seemed like a closer, but Bruce called out for “Twist and Shout” that went for a predictably long time. Big Pussy got in on the fun, walking to the center of the stage and breaking out some dance moves. Even the Bruce hardcores seemed drained at this point, but Springsteen was still a beam of energy. Someone brought out a birthday cake for Light of Day founder (and Parkinson’s sufferer) Bob Benjamin, and Bruce shared some hysterical memories of how he met Bob at the opening date of the Darkness On The Edge of Town tour in Buffalo in 1978. “I was stalking you,” Benjamin admitted.

The night ended with a sing-along version of “Thunder Road.” Like at last year’s Light of Day, the crowd managed to almost completely drown out Springsteen. I’ve heard the song countless times, but it always takes on a special meaning at events like this. The song may be about a man trying to flee a “town full of losers,” but last night it was about that town coming together to battle a horrible disease and throw a giant party. It was Springsteen’s first appearance of 2012, and hopefully the kick-off of a busy and productive year.