Bruce Springsteen didn’t walk onstage at the 14th annual Light of Day benefit in Asbury Park, New Jersey until midway through the show, but from the very beginning of the marathon concert – which raises money to combat Parkinson’s Disease – there were clear signs that he was in the house. For one, his longtime guitar tech Kevin Buell was stationed directly on the side of the stage all night, occasionally picking up some of Springsteen’s signature instruments to make sure they were properly tuned. The posted running order for the evening also differed from one released days earlier on the Internet in one crucial way: Original headliner Johnny Rzeznik was suddenly slotted before Joe Grushecky and the Houserockers, the group Springsteen has jammed with at nine Light of Day events dating back to 2000.

Don’t Miss the 100 Best Springsteen Songs of All Time

Still, you could almost feel the capacity crowd at the Paramount Theater breathe a collective sigh of relief when Springsteen walked out during Jesse Malin’s set for a raucous rendition of the 1980 Ramones classic “Do You Remember Rock ‘n’ Roll Radio?” The cheers were deafening as people jumped to their feet and held their cellphone cameras high into the air. Suddenly the decision to drop upwards of $250 at ticket (or significantly more on StubHub) no longer seemed like a gamble (though it was always going to a great cause anyway). A stunning number of people raised their hands when an emcee asked the crowd if anyone flew into the event from overseas. Many of them probably enjoy the other acts on the bill, but they surely didn’t cross the Atlantic Ocean to visit Asbury Park on a bone-chilling January evening because they love the Goo Goo Dolls.

The show kicked off at 6:00 p.m. with sets by New Jersey a cappella collective RockNRoll Chorus, young blues rock group the Matt O’Ree Band (who sprinkled a bit of “Smoke On The Water” into their jammed-out set) and sultry Jersey singer-songwriter Nicole Atkins, who previewed tracks from her upcoming CD Slow Phaser. Longtime Light of Day supporters Joe D’Urso and Stone Caravan were out next. They brought out original E Street Band drummer Vini “Mad Dog” Lopez to play tambourine on one song, and later Mike Peters of the Alarm joined them on a garage rock version of his group’s hit “Sold Me Down The River” and a cover of Neil Young’s “Rockin’ In The Free World” – two songs that were all over rock radio back in 1989.

Jesse Malin had a two-piece horn section for his set, which he used to showcase songs from his in-progress follow-up to 2010’s Love It to Life. At the 2010 Light of Day, Springsteen joined him on the somber “Broken Radio,” a song they cut together in 2007. This time they decided to amp things up considerably with their Ramones cover. Springsteen wore a red bandana tied tightly around his neck, and was clearly having a blast paying tribute to the music scene of his youth. Malin confessed at the end that Bruce had to teach the band about some of the references in the song, since they came of age after the time of Murray the K, Hullabaloo and the Barbarians.

The next performer, Garland Jeffries, released over a dozen great albums dating all the way back to 1970, thought he never quite enjoyed the success he deserves. His music is a unique fusion of rock, reggae and soul, though he’s best known for penning “Wild in the Streets,” which was famously covered by the Circle Jerks in 1982. The seventy-year-old New York native opened with a stellar cover of Bob Marley’s “No Woman, No Cry.” He stretched out his 1980 track “Mystery Kids” to about ten minutes, building to a soaring climax where he told a very sad story about his father beating him as a child. He wrapped with a crazed “Wild in the Streets.”

Willie Nile is another gifted New York singer-songwriter who deserves to be more well-known. He’s been playing clubs since the 1970s and really commands the stage, taking the entire crowd to their feet from the second his set began. “Heaven Help the Lonely” and “House of a Thousand Guitars” are anthems that would sound great in a basketball arena, and for his grand finale of “One Guitar,” he was joined by D’Urso, Mike Peters and Bruce Springsteen. Watching Springsteen share a microphone with the frontman of the Alarm was a bizarrely wonderful sight and they were both grinning from ear-to-ear.

Goo Goo Dolls frontman Johnny Rzeznik always seemed like the odd man out on this bill. He’s not from New York City or New Jersey, and he didn’t release a series of critically acclaimed though widely ignored albums in the 1970s and 1980s. But he’s had more pop success than everyone else on the official lineup combined, and a good many people in the crowd were absolutely delighted to see him. Looking like he was frozen sometime in 1998 and recently unthawed, Rzeznik played a solo acoustic set that focused on Goo Goo Dolls hits like “Slide,” “Name,” “Black Balloon” and “Iris.” “Sometimes I feel like that’s the only song I ever wrote,” he said before playing the latter tune. “But I’m grateful for it.”

The “Brooocing” started as soon as the curtain went down, because everyone knew what was coming next. Mike Peters had the tough job of playing a trio of songs as the stage was set up for Joe Grushecky and the Houserockers. Some asshole even thought it was a fine idea to yell out “BRUCE” at the top of his lungs midway through Peters’ acoustic rendition of the Alarm’s 1983 hit “68 Guns.” Playing to an audience of fanatical Springsteen fans when your name is anything but “Bruce Springsteen” is no easy task.

Joe Grushecky – a teacher at a Pittsburgh public school whose band the Iron City Houserockers never saw their early 1980s critical acclaim translate into actual record sales – kicked off his set (sans Springsteen) with “John the Revelator” and “Somewhere East of Eden” from his new LP East of Eden. Both are fantastic rock songs that prove that years and years out of the limelight haven’t dulled his skills.

The cries were deafening when Springsteen came out next and launched into a jaw-dropping “Adam Raised a Cain,” effectively turning Joe Grushecky and the Houserockers into a looser, more garage-y E Street Band, with Joe in the role of Steve Van Zandt. (Ed Manion – who now splits sax duties with Jake Clemons in the E Street Band – sat in with the group for most of their set.) “Adam Raised A Cain” was one of five songs he played during his ninety-minute set from the Darkness On The Edge of Town sessions, along with the title track, “The Promised Land,” “Save My Love” and “Because The Night,” which Springsteen began with a long, searing guitar solo. 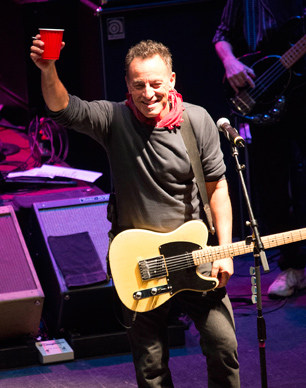 Springsteen did cede the spotlight to Grushecky for a number of tunes, including “I’m Not Sleeping,” “Talking to the King” and “Never Be Enough Time,” a stand-out track on his 1995 LP American Babylon, which was produced by Springsteen. The two of them are extremely close friends and it’s a real joy to see them revive this material.

The biggest surprise of the night was “Hearts of Stone,” a song Springsteen gave to Southside Johnny in 1978, but has very rarely performed himself. They also played a sloppy, though extremely fun “Frankie Fell In Love” from Springsteen’s new LP High Hopes and a killer “Atlantic City” before bringing out all the night’s performers for “Light of Day.” Event organizer Bob Benjamin – a New Jersey concert promoter who has been battling Parkinson’s Disease for years – thanked everybody for coming midway through the song before a cake was wheeled out and everyone sang him “Happy Birthday.”

It seemed like the show was over, but Springsteen strapped on an acoustic guitar and led the crowd in a sing-along of “Thunder Road.” Bruce barely sang a line of it, though per Light of Day tradition, Joe Grushecky accidentally confused the verses and threw the entire theater off. Springsteen cackled at his friend’s mistake and got things back on track on the “these two lanes can take us anywhere” verse.

It was 1:20 a.m. at this point, but the crowd would have stayed all night had things not wrapped up with a quick speech by Bob Benjamin and Springsteen thanking everyone for coming out. It must have been about ten degrees on the boardwalk, with freezing winds blowing hard off the ocean, but nobody seemed to be complaining. They’ll probably all be back next year.