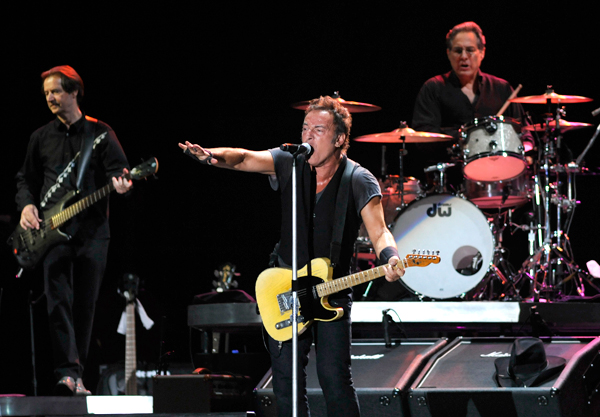 Bruce Springsteen and the E Street Band have announced a 19-date U.S. tour that kicks off March 18th at the Philips Arena in Atlanta, Georgia and wraps up on May 2nd at the Prudential Center in Newark, New Jersey. The first batch of tickets go on sale this Friday. Three days before the tour launches, Springsteen will serve as the keynote speaker at the South By Southwest Music and Media Conference and Festival Austin, Texas. It is highly likely he will also perform a show somewhere in the area around that time.

This is Springsteen’s first tour since the Working on a Dream tour ended in November 2009. It is also his first outing with the E Street Band since saxophonist Clarence Clemons died last June. A press release announcing the tour notes lists all of the current members of the E Street Band, but does not indicate how they plan on addressing the absence of Clarence Clemons.

Notable stops on the tour include a two-night stand at Madison Square Garden, two nights at the Izod Center in East Rutherford, New Jersey, Springsteen’s first live appearance at the Prudential Center in Newark, New Jersey and and an appearance at Jazz Fest in New Orleans.

Springsteen and the E Street Band will kick off a long European summer tour 11 days after the completion of the U.S. tour, but they will return to America sometime later this year – possibly to play stadiums in major U.S. markets. There have been reports that Springsteen may perform at Chicago’s Wrigley Field in early September, but that is unconfirmed.

Here are the complete tour dates for Bruce Springsteen and the E Street Band’s 2012 U.S. tour.