Brandon Flowers on Killers' Future: 'We Need a Kick in the Pants' - Rolling Stone
× 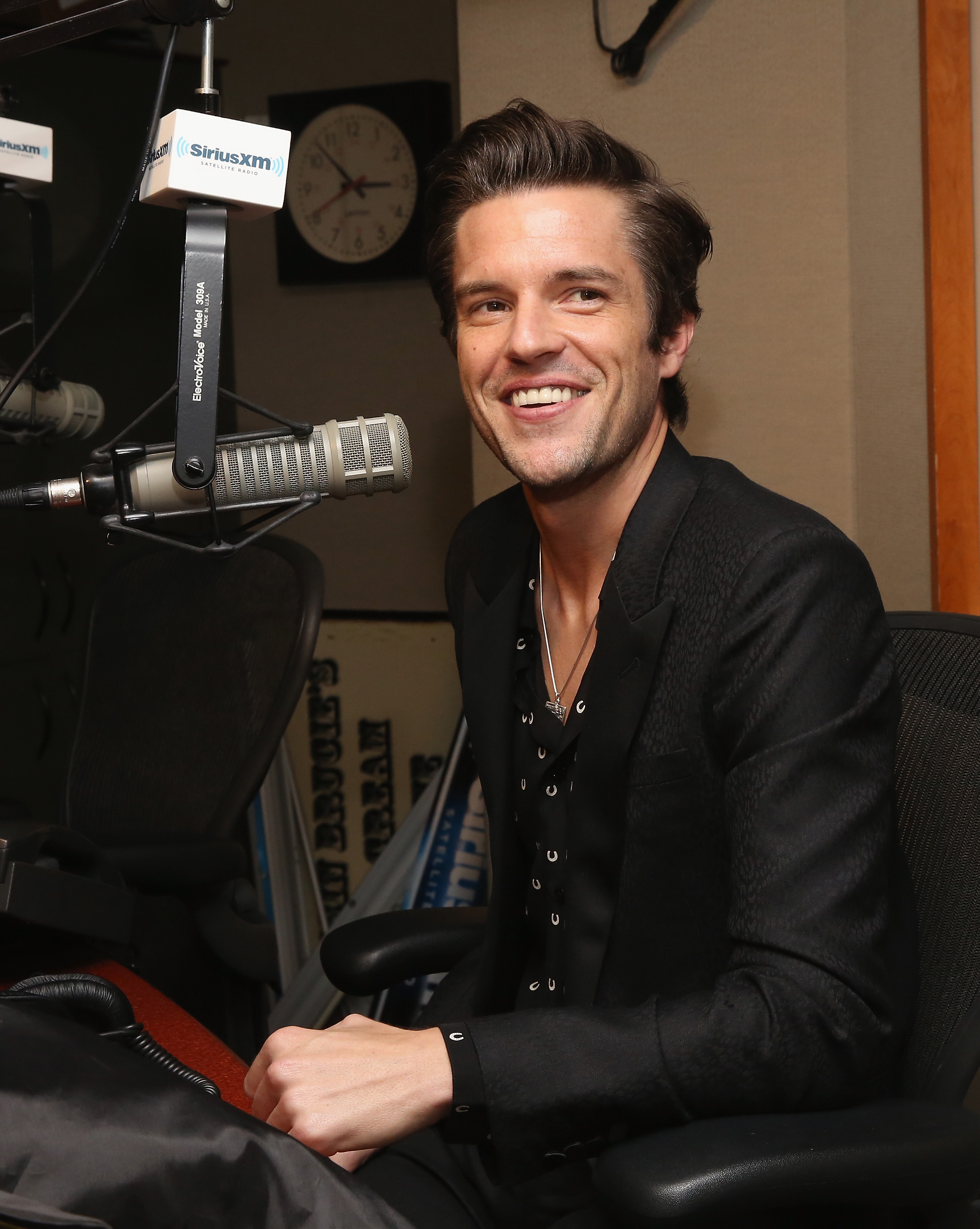 The Killers have been laying low since they wrapped a big tour last summer — which doesn’t necessarily sit well with frontman Brandon Flowers. “A couple of the guys want to take a break from touring and the rat race,” the singer, 33, told Rolling Stone. “I want to keep it going.” So Flowers decided he would record a new solo album, The Desired Effect (out May 19th), a collection of spare, synth-y pop songs he cut with producer Ariel Rechtshaid (Haim, Vampire Weekend). We caught up with Flowers as he prepares for a solo tour of Europe.The tour hits the U.S. July 27th in Millvale, Pennsylvania.

You recently said you felt like all the songs on your new album could be singles.
It feels strong. I was a little overconfident that day, but that’s just how it goes. I’m really proud of it, and I am excited about it. But then I also need to watch my language.

You never really hold back in interviews.
Yeah. We’re all so worried about being politically correct and walking on eggshells, and it makes for a lot of boring conversation. But I’m guilty of being too careful or too cautious about what I say, for sure. But I have good reason.

Brandon Flowers on Solo 'Effect': 'I'm Not Holding Back on This Record'

I read an essay calling the Killers’ second album, Sam’s Town one of the most misunderstood albums of the decade.
Yeah, it’s crazy. It just took a beating. It was just in America. In England it wasn’t so bad. It started with Rolling Stone, and sort of everybody else seemed to follow suit, and that was really frustrating. But, you know, it’s fine. I got thicker skin because of it. I really believed in that record, and we went out onstage every night, and I was going to prove it. I think it made us better live, and that’s been a real blessing, because touring is such a big part of what we are, and I enjoy it so much.

Before it came out, you called it “one of the best albums in the past 20 years.”
Yeah, that was another one. I can still see it: I was standing in my driveway in Henderson, Nevada, doing an interview. And I remember those words coming out of my mouth. I didn’t know it was going to be so controversial. I was just excited! You know, recently I saw Ian McCulloch [from Echo and the Bunnymen] said “The Killing Moon” is the greatest song of all time, because he loves that song and he’s proud of it. I understand why he said that. It might not be the best song of all time, but it’s a great song! And he’s a badass, and he just loves it, and he’s proud of it. And that was how I felt. I was so excited about it, and it ended up backfiring. [Laughs] I put my foot in my mouth quite a bit in the early days.

Like in 2006, when you said Kanye West “makes me ill”?
Yeah, that one’s tough. Everyone’s afraid to say anything contrary to him being a genius. It’s crazy, man! And it’s frustrating. I’m not going to tear him down, but I will say I find that to be frustrating. [Laughs] That’s my stance on it. A lot of people might agree with me now. I may have been a little bit ahead of my time. But I think he wants to be good. I think he wants to be great, and that’s something that we all want to strive for. We’ve just got different roads of getting there, I guess.

In new songs like “Digging Up the Heart” or “Dreams Come True,” it feels like it’s sort of a race to get to the chorus, and keeps you on the edge of your seat.
There’s that famous Petty thing: “Don’t bore us, get to the chorus.” I think the Stones are really great at getting to the chorus really quickly, and all kinds of people. I learned from people like Chuck Berry. Elton John is sort of the king of that, where the parts just keep coming, and they just keep getting better, and you can’t believe that the next part is going to be better than the last one. And he’s up there, in a lot of my pop sensibility or my writing sensibility.

Is it harder to write songs from a desperate place as you get older?
I don’t feel too far removed from that person that I was when I was sort of an obsessive teenager, or sometimes possessive or whatever it was. So I think some of those traits, whether you get over them are not, they are still lingering, and it’s not too difficult for me to draw from those past experiences.

I put my foot in my mouth quite a bit in the early days.

What goes through your head when you turn on the radio?
You hear a lot of blending of different genres, and that’s great. But the bands that were around when the Killers first came out 10 years ago – the Strokes, Franz Ferdinand, Interpol – all had a strong identity. I don’t hear that as much, I guess. That’s the best way to put it.

You had lunch with Mitt Romney, a fellow Mormon, during his campaign, right?
You know, he was a nice guy. I don’t have anything bad to say about him. I think he’s a leader, and I think he would have been a great president.

It sounds like you picked up some cues from Lorde on this record. Are you a fan?
Yeah. There’s something really bold about how bare her songs are. That sort of minimalism is a good route – but if you’re going to strip it down like that, the song better be really good.

And you have a couple of Killers dates coming up.
It’s exciting. We’re coming off of the Battle Born tour, and I just look back on those shows, it was so much fun. The shows just kept getting better, and there are more people at the shows than ever before. And it’s just growing and settling in with people, and they’re lasting. And I’m really proud of that. I’m also just excited to add to the songs. I can’t wait for the next Killers record and to go do it again.

There’s always so much speculation about you guys, “They’re on hiatus,” or “They’re gone for the foreseeable future.”
I get it. There are a couple of remarks made by Dave [Keuning], our guitar player, that made it sound a little bit more ominous than it really was. And so it makes people wonder. But, no, everything is fine. I’ve been talking to Dave, and he hasn’t sounded this excited about making music in a long time. So that, in turn, makes me excited. I feel like when he’s at his best, and when we’re all collaborating, is when the Killers are at their best, and that’s what we really need. I’ve said it before – I think we need a little bit of a kick in the pants, and hopefully it’s coming.

What do you mean?
You hear the phrase, “It’s like riding a bike.” You get back together, and it can become just sort of too cyclical. It’s like, “Oh, it’s time to get back together, we’re making a record, then we go on tour.” And it’s this big sort of machine, now. And we really need to find a way to get a little bit of that drive and that hunger back that we had earlier on, and not just look at it as an opportunity to make more money and make a record and go tour. [Laughs] And it’s great to make money, but I want to walk on that stage and feel like I belong there, and feel like I have something to offer. And that’s he most important thing.

You said recently, “There’s definitely a drive that we’re lacking.”
You want a band. I want to feel like we’re together, and I might just be guilty as anybody else, of being sort of duped by just seeing a picture of guys and assuming everything is perfect and they’re just a band of brothers making music. But that’s what I want, and that’s the goal, and that’s what we all want. I want us to get back to that place, and the people that want to get together and take on the world. And when I think of INXS or U2 or the Stones, those are the things that come to my mind. They knew what they wanted to do, and did it.

What needs to happen to achieve that?
I don’t know yet. [Laughs] But I am excited. Like I said, Dave is sounding like he’s really excited, and that’s a start. Ron’s ready. Ron’s got his sticks, they’re probably in his back pocket now.

By the way, you’re following six people on Twitter, and none of them are in the Killers!
[Laughs] Are they on there?