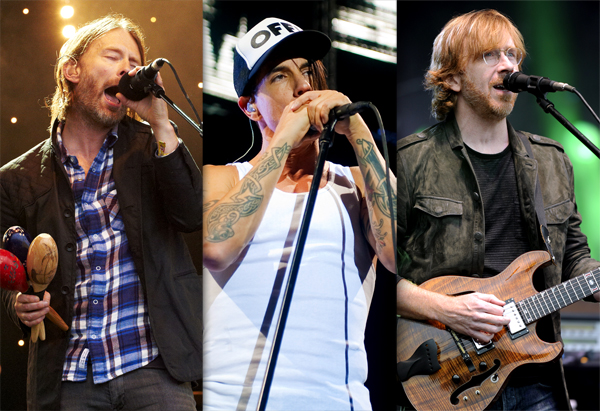 Bonnaroo has officially confirmed that, as rumored, Radiohead, Red Hot Chili Peppers and Phish will anchor the 11th incarnation of the iconic music festival, which will take place from June 7th to 10th in Manchester, Tennessee. The above headliners will be joined by recent Grammy winners Bon Iver and Skrillex, a reunited Beach Boys and comedian Aziz Ansari. All told, more than 150 bands and nearly two dozen comedians will offer fans continuous entertainment on 13 stages over the course of four sleepless days and nights.

True to its formula, Bonnaroo’s lineup breaks away from other major U.S. festivals who have often been accused of homogenous programming. This year, shock rocker Alice Cooper will join the party. So will rapper Ludacris. The festival will honor its jam band roots with performances from Umphrey’s McGee, ALO and Dispatch, while also making room for electronic acts with sets by Flying Lotus, Major Lazer and Big Gigantic. Hardcore group Bad Brains will make their inaugural Bonnaroo appearance as will Spectrum Road, an all-star band featuring Cream’s Jack Bruce, Living Colour’s Vernon Reid, Carlos Santana’s wife Cindy Blackman, and revered organist John Medeski.

Indie rock royalty will appear alongside current up-and-comers with sets by the Shins, the Avett Brothers, Foster the People, Feist, tUnE-yArDs, Little Dragon, Mogwai, Dawes and Alabama Shakes among many others.

When Bonnaroo launched in 2002, it imagined itself as a cross between Phish’s homegrown parties in the Northeast and the New Orlean’s Jazz and Heritage Festival in Louisiana. In fact, Bonnaroo organizers brought in some of the creative team behind Phish’s events, while creating a format that was directly inspired by what they saw at the fairgrounds in New Orleans. In keeping with the spirit that the festival was built upon, when Phish finally performed at Bonnaroo, in 2009, they brought out Bruce Springsteen to jam.

But it’s not only jam bands who jam at Bonnaroo –  collaborations are frequent and bands often feel free to take more risks than they might otherwise. A large part of that has to do with the vibe. Fans who make the annual pilgrimage to Tennessee tend to listen to bands, not hype. Multiple musicians seem to comment on this from stage every year and the band-fan respect is so high that it is not uncommon to see artists roaming the grounds and watching other sets from out in the field, when their own duties have been fulfilled.

Tickets will go on sale this Saturday, February 18th at noon ET, at bonnaroo.com.

Here is the complete 2012 Bonnaroo lineup as announced at this time: