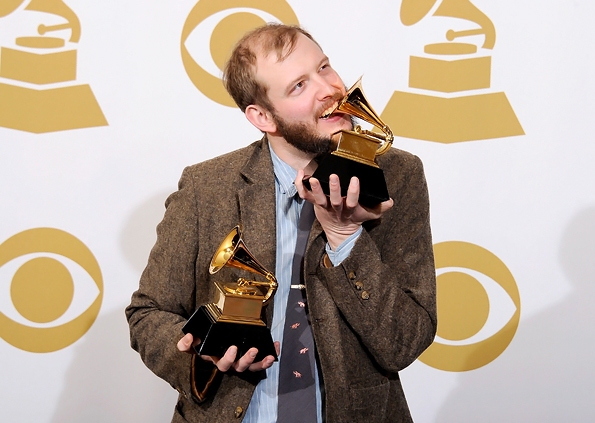 “There’s a lot of talent that’s not here tonight,” said Vernon, the band’s principal songwriter. That statement left us wondering: Who is Vernon’s own pick for best new artist?

“I’ve been listening to this band Polica from Minneapolis a lot lately,” the 30-year-old singer tells Rolling Stone. “They’re the best band I’ve ever heard.” Vernon, a respected songwriter who collaborated with Kanye West on the track “Lost in the World,” was also nominated for Record of the Year and Song of the Year for “Holocene,” losing to Adele’s “Rolling in the Deep” in both categories.

“When I started to make songs, I did it for the inherent reward of making songs,” says Vernon, who released the debut For Emma, Forever Ago under the Bon Iver moniker in 2008. In the wake of the band’s Grammy showing, Vernon is focused on identifying contributors for future studio endeavors.

“In the business of music, there’s a lot of talk about producers and singers and shit like that. But the shit I geek out on is engineers. One person I’m very interested in working with is Frank Rogers in Nashville. I’m a big fan of modern country, and he works on some modern country that I really like. Another is Oz Fritz. He’s a great engineer that works with Tom Waits.”

While Vernon has claimed the next Bon Iver album may be five years away, that hasn’t stopped the Wisconsinite from assembling a wishlist of collaborators.

“We all really care about James Blake because, well, just because. He’s a guy that we know well that we’ve considered bringing in. But let’s bring in his team, the men behind James Blake, as well. We met all those guys and they’re great. Whenever you work in this business, you run into a lot of people that remind you of yourself. And when you run into people that are doing shit that’s totally different — but yet you all agree about how to do it — then you win.”