Bob Dylan’s original lyrics for his landmark 1965 song “Like a Rolling Stone” is heading to auction this summer.

10 Greatest Bob Dylan Songs: Bono on “Like a Rolling Stone”

Sotheby’s announced Thursday that it will make available “the only known surviving draft of the final lyrics for this transformative rock anthem” on June 24th as part of the auction house’s rock and pop music sale. The lyrics, written in pencil on four sheets of hotel stationery, are expected to fetch between $1 million and $2 million.

In addition to the iconic lyrics that made the final cut, the auctioned-off papers showcase Dylan’s mindset and possible additional lyrics not in the final draft. The letters include the phrase, “…dry vermouth/You’ll tell the truth” as well as the name “Al Capone” scrawled in the margin of one page. As the New York Times notes, Dylan tried multiple phrases in conjunction with his “how does it feel” lyric, including “it feels real,” “does it feel real,” “shut up and deal,” “get down and kneel” and “raw deal.” Dylan wrote the lyrics while staying at the Roger Smith Hotel in Washington, D.C.

“In this near complete four-page working draft, the distinctive often repeated ‘how does it feel’ lyric is clearly visible alongside unused lines, stray thoughts on American cultural imagery, and interesting doodles,” Sotheby’s said in a press release. 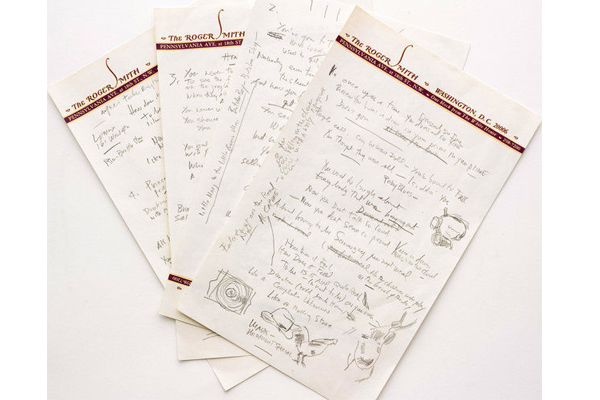 “If you look at these four pages, you can see that at this stage there are rhyme schemes that he didn’t pursue, and I suppose the chorus is the biggest surprise,” Richard Austin, Sotheby’s manuscript expert, told the Times. “Here you have a chorus that is such an iconic piece of history, but it clearly didn’t arrive fully formed. And you wonder, if he chose another rhyme, would it have had the same impact?”

The seller was not identified, but is a “longtime fan from California,” according to the auction house, “who met his hero in a non-rock context and bought directly from Dylan.”

Two pages of Dylan’s “A Hard Rain’s a-Gonna Fall” will also be available for auction as part of the sale, which Sotheby’s is calling “History of Rock and Roll From Presley to Punk.” While the lyrics are in finished form, they also include a quotation from the biblical book of Jeremiah (“Before I formed you in the womb, I knew and approved of you”) and the notation “diamond desert” in the margins of the second verse. Those lyrics are expected to sell for between $400,000 and $600,000.

Should the lyrics to “Rolling Stone” go for $2 million, it would nearly double the record for a rock manuscript, currently held by a 2010 sale of John Lennon’s “A Day in the Life” for $1.2 million.

Alongside Dylan’s lyrics, the auction house is also offering Joni Mitchell’s manuscript for “Big Yellow Taxi,” guitars owned by Lennon and Eric Clapton and a contract Jimi Hendrix signed in 1965 agreeing to perform live and in the studio for $1.

In 2004, “Like a Rolling Stone” was ranked Number One in our 500 Greatest Songs of All Time, with the accompanying interactive video, released 48 years after it was written, appearing at Number Four in our 10 Best Music Videos of 2013.