On August 9th, Blondie guitarist Chris Stein returned to the decade that launched his band, opening an exhibition of his photography at the Morrison Hotel Gallery, Sunset Marquis Hotel, in West Hollywood. Debbie Harry, Joan Jett and other survivors of the Seventies underground music scenes in New York and L.A. depicted in the pictures joined him to remember how it all began.

“Chris was the one who taught me how to relax in front of the camera,” Harry recalled to Rolling Stone, sitting with her ex-boyrfriend Stein as guests crowded into the small gallery. “I didn’t think I would really enjoy doing it until he started shooting me. We had an intimacy. It was never that serious. It was just fun to do.”

Some of those same pictures were among the first that many fans ever saw of Harry, who began appearing on international magazine covers once Blondie exploded into the mainstream with their 1978 album, Parallel Lines. “It was a really wonderful time, a lot of great music, and I was living my dream,” Harry said. “I was in a touring, working rock & roll band that really got up people’s noses.” 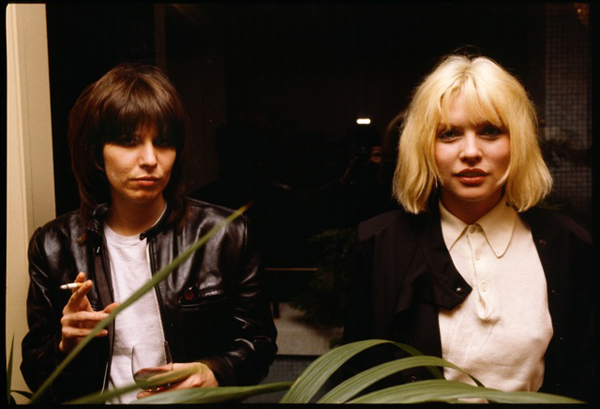 Stein wasn’t just a musician taking snapshots of his friends in that pre-digital era, but he was quite serious about recording the early punk and new wave culture rising up around him. He studied at the School of Visual Arts in New York and began shooting in 1968. He eventually set up a darkroom in the kitchen he shared with Harry on 17th Street. “Whatever was there, I was always trying to document it to an extent,” said Stein, wearing a dark suit and glasses, a small digital camera in his lap.

The Morrison Hotel Gallery is hosting 24 large prints, mostly dating back to Blondie’s early years up through the mid-Eighties. There are portraits of the Ramones, Richard Hell and Devo, of Andy Warhol photographing Harry with a cheap Polaroid camera, her glamorous expression open and impenetrable. Another picture depicts rock critic Lester Bangs cradling a beer with locals in Coney Island as part of a shoot for Punk magazine.

During those years, Stein and Harry were a couple and traveled often to Los Angeles, bridging the gap between rival music scenes on opposite coasts. There are pictures of Harry posing in front of the Hollywood sign, and a giant blowup of L.A. radio DJ (and crucial early booster of punk and new wave) Rodney Bingenheimer, leaning against an electric-blue GTO muscle car in front of the now-demolished Tiny Naylor’s coffee shop.

“He had his camera out all the time,” Jett said at the gallery. “It was natural. It was part of the fabric. It wasn’t like these days where it’s more paparazzi or showbizy. You were relaxed about it.”

Most surprising is a picture of future Chili Peppers singer Anthony Kiedis as a teen with his father, actor Blackie Dammett, both wearing black T-shirts and expressions of streetwise attitude. “I knew Blackie from the scene,” Stein recalled. “He showed up at the Tropicana one day and said, ‘This is my kid.’ Anthony proposed to Debbie. I thought they looked real cool together. I got a whole roll of them.” 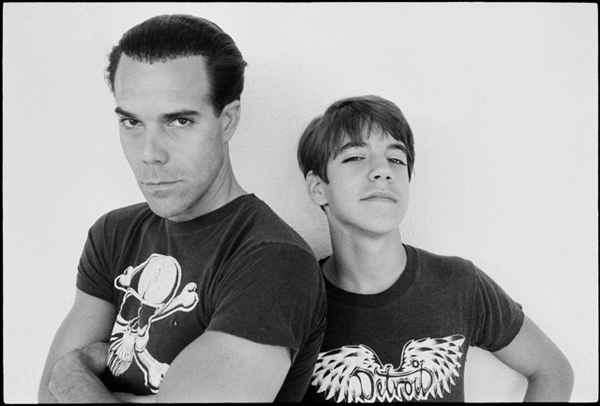 There are also several pictures with Jett, including one that captures the young rocker in 1977 reclining against a flowery pillow in her L.A. bedroom during her time in the Runaways. Decorating the wall above her is an array of leather, handcuffs and gloves, and on the bedside table is an extra-large Coke as big as her head.

“I don’t know how much that stuff was in use,” Jett said, looking at the picture. “Those gloves could have gotten some use for sure.”

The images also document the long friendship she’s had with Blondie since she was a teenage Runaway. “We used to hang out a lot. When Blondie would come to L.A., they’d set up in town for a couple of weeks or a month and be around for a while,” said Jett. “They were always very, very supportive of the Runaways and me, even after the Runaways broke up and they had big hits. They tried to talk me up to the press and record companies. They were real friends.”

Prior to the opening, Blondie just returned from a tour of Europe and are now preparing for the November release of Ghosts of Download, with a cover designed by JH Williams, known for his work on DC Comics’ Batwoman. “It’s about all spirits in the background of electricity and data,” Stein said of the album title. “Hopefully it’s a little more modern. Its dance oriented. We do have one EDM song we did with Hector Fonseca.”

Blondie begins a U.S. tour with X in September, and has been including up to six new songs in the set, which Stein said seemed to integrate easily with the older hits. “There was some outcry that we didn’t do ‘Rapture’ in Europe, but we’ve been doing it every tour for a long time,” Harry said. “It’s exiting for us to do new material — that’s all there is to it. It’s important for us to keep moving, and people are starting to understand”

While Harry and Stein insist on looking forward onstage, unearthing pictures from the past for public consumption brings back memories. The era captured in those images has had a lasting meaning for them, said Harry: “What brought it all home to me about how emotionally important it was, was when the Twin Towers went down. All I wished was that I was back in the Seventies. It was a time of innocence for us, and high energy and exploration. We were discovering all the time.”