What’s their age again? Blink-182 revived their heyday for a sweaty crowd of 500 in Brooklyn last night, their command of punk melodies and babyfaced aggression still intact after all these years. And they had the venue to match: Easily Blink’s smallest gig in ages, Music Hall of Williamsburg made for a wall-to-wall pit of fans hell-bent on slamming beers and slam-dancing. Even stage security joined in the fun; one bouncer, while corralling crowd-surfers, sang along to “I Miss You,” after which drummer Travis Barker tossed a pair of spent sticks into the audience. 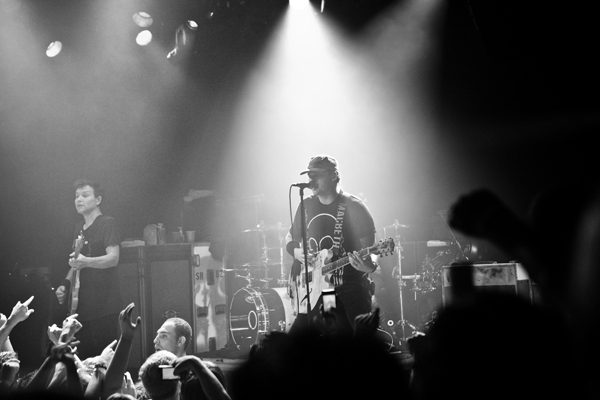 Most telling about the shirtless and tattooed Barker was what wasn’t visible – no sign exists of the critical burns he suffered during a plane crash that killed several people five years ago this month. His many medical treatments saved him, and ended up saving the band; they reunited in 2009 after a four-year hiatus. Their intimate shows this week in New York and New Jersey were a way of showing appreciation for their good fortune. They donated last night’s entire paycheck to New York’s William Randolph Hearst Burn Center, and City of Hope, a Los Angeles-based center for cancer and diabetes patients. The night before, in Sayreville, New Jersey, Blink played to benefit families who lost homes to Hurricane Sandy last year. 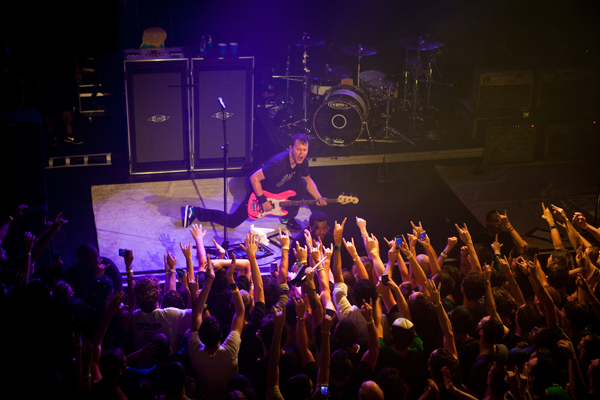 Other hits and favorites followed, balanced between several cuts from 2011’s Neighborhoods (“After Midnight,” “Heart’s All Gone”) and Take Off Your Pants and Jacket from a decade earlier (“The Rock Show,” “First Date”), with a couple thrown in from their latest record, last year’s Dogs Eating Dogs EP. The straightforward setlist ended with a two-song encore from the band’s pre-Barker period: “Carousel” and “Dammit (Growing Up).”