UPDATE: Bad Religion, Cypress Hill and Digable Planets are among the artists set to perform classic albums from front-to-back at Riot Fest 2018. Bad Religion will celebrate the 30th anniversary of their 1988 classic, Suffer, while Cypress Hill and Digable Planets will mark the 25th anniversary of their respective records, Black Sunday and Reachin’ (A New Refutation of Time and Space).

Father John Misty, the Jesus Lizard, Gary Numan and Liz Phair are among the newcomers to the festival and this year’s lineup will also feature the first-ever Chicago show from Calpurnia, which is fronted by Stranger Things‘ Finn Wolfhard.

On Wednesday, Riot Fest teased some of the acts that would be performing prior to making the first wave announcement with a video, which featured lineup hints performed via a roving polka band, who played snippets of songs from Dropkick Murphys, Alkaline Trio, Blondie, Jerry Lee Lewis and Elvis Costello.

As in previous years, the three-day festival promises select performances of seminal albums played in their entirety, which will be announced at a later date along with additional headliners and acts. The festival also features sideshow performers and carnival rides and games.

Tickets for this year’s Riot Fest go on sale on Wednesday at 8 p.m. Central Time. 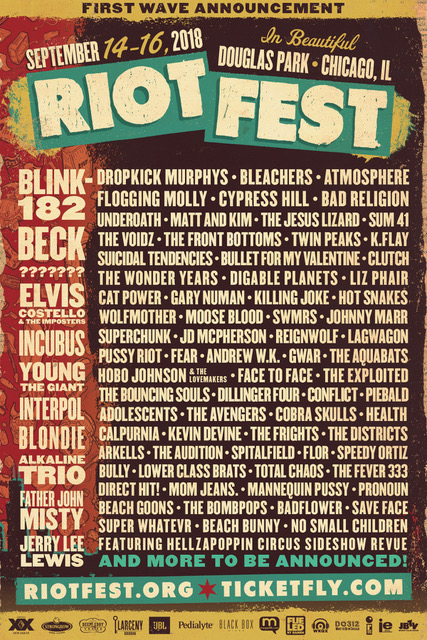