Throughout their initial run as L.A.’s resident punk terrorists, Ginn served as its sole original member, its lifeline. He oversaw the band’s label, helped discover another one of its vocalists, Henry Rollins, and led his band in sweaty, confrontational concerts and through more than one battle royale with the L.A.P.D. For five months of Black Flag’s decade or so run, its vocalist was Ron Reyes. In that time, he lived with the band in the run-down, graffiti-splattered Baptist church they called home, he recorded angry vocals for the group’s 1980 EP Jealous Again and its 1982 comp Everything Went Black and he sang three Black Flag songs so incoherently in the 1981 punk doc The Decline of Western Civilization that they required subtitles.

Where Does Black Flag’s ‘Damaged’ Rank on Our 500 Greatest Albums List?

He and Ginn reconnected at the former’s birthday party in 2010 and they decided to restart the band. Together, they wrote and recorded What The . . ., the group’s first record in 28 years. But within a month of its release, Black Flag fired Reyes mid-concert at a gig in Perth, Australia. The reunion was not the next evolutionary step in Black Flag’s ever-evolving mien of seething hardcore and sludge rock – at least it hadn’t gone as well as pioneer Ginn had hoped.

“We feel that, generally, the band fell short in 2013 because of a difference in the philosophies of Ron and Greg – it just led to dysfunction,” says Mike Vallely, a pro skateboarder who spent 2013 managing Black Flag and singing with Ginn in another, similarly aggressive group, Good for You. The skater says he is granting only one interview on the state of Black Flag and that he speaks for Ginn. He also says that as of Reyes’ ouster, he has officially stepped into the role of the band’s frontman – its fifth overall.

Black Flag’s mission in 2014 is to right the wrongs of the previous year. “It could have been better,” Vallely says. “[Black Flag] can be a stronger, more cohesive, tighter band. We want to prove that.”

To make good on that promise, the band has already begun recording new material. Vallely says it is also planning a “pretty extensive” tour, which will likely start in May. 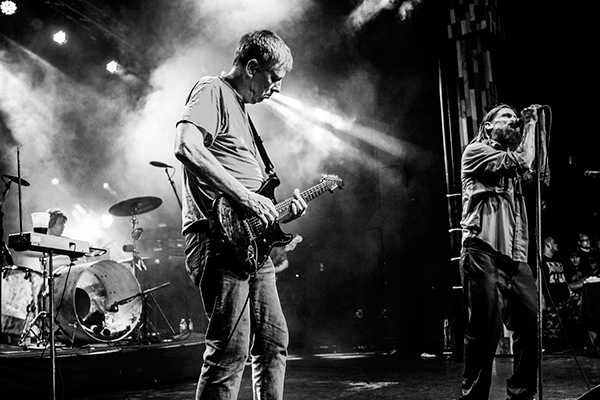 The pair had planted the seeds for the reunion after Ginn agreed to play some Black Flag tunes for kicks at a party for Reyes’s 50th birthday. The pair decided to write some new music together and within two years opted to do a reunion. “Greg figured, if he were to relaunch Black Flag, it’d be cool to do it with someone who sang in the band,” says Vallely, who also previously sang on a short-run of Black Flag shows in 2003. The group formally announced its return in January 2013 and embarked on a tour. It all came to an end at an Australian concert in November.

Reyes wrote in a Facebook post that his dismissal was a “great relief.” “With two songs left in the set, Mike V. comes onstage, stares me down, takes my mic and says ‘You’re done. Party’s over. Get off. It’s over,'” he wrote. He described the Black Flag reunion experience as having moments that were “overwhelmingly bad” and that “so many things went wrong from the start.” He also wrote, “I would not be surprised if Mike V. becomes the new singer for Black Flag. It is my opinion that they have been planing [sic] this for some time.”

Not so, says Vallely. As manager on the 2013 tour, he says he saw Reyes grow “disgruntled” and “combative” over the course of the reunion. Vallely alleges the singer didn’t jive with Ginn’s goal of progressing the band, rather than celebrating the past, and that Reyes had attempted to quit previously. He says that when he interverned in Australia, he did so mid-set because he thought Reyes was going to “act out his grievances” and quit onstage. “I did not threaten him or physically remove him from the stage,” Vallely says. “I just told him very plainly, very simply, that it was over. And he looked at me and he almost seemed relieved. Then he walked off the stage.” Regarding the decision to elect Vallely as the new frontman, he said Ginn offered him the spot immediately after Reyes’ dismissal. “Greg just felt like, ‘I don’t want the Black Flag name to fizzle out with this or be tainted with this record that’s proven to be subpar compared to what the expectations for it were,'” Vallely says. “He told me he made a mistake by working with Ron and trying to pander to a sort of old-school thing. He just thought that I was the guy for the job. . . I’m not gonna say no to that.”

The new frontman says Ginn didn’t challenge Reyes on details he now regrets – like the album’s pukey green, cartoonish cover, which drew derision from fans – because he wanted to honor the “original commitment he made early on [to Reyes].” “I talked to Greg about [the legacy of Black Flag] and he said, ‘I write a lot of music, and I’ll write a lot more music. I’m not gonna cry over one fucking record,'” Vallely says, who adds that What The . . .  is “still a pretty decent record.”

One very public issue that Vallely declined to comment on at length was Black Flag’s lawsuit against another band of former Black Flag members going as Flag. Ginn sued that group, which features the band’s first vocalist, Keith Morris, in August for trademark infringement and also named Rollins in the suit, claiming Rollins and Morris had trademarked the band’s “bars” logo behind his back. In October, a judge prevented Ginn from filing a preliminary injunction against his old bandmates. “It’s about protecting one’s creative livelihood from other people trying to hijack it,” Vallely said. He added that he didn’t consider the suit to be his business.

What is his business, however, is how Black Flag presents itself onstage. As its new frontman, he says Black Flag will have more fun onstage in 2014. “There are a lot of songs like ‘TV Party’ and ‘Six Pack’ that are fun, fun songs,” he said. “You’re allowed to smile. It’s OK.”