On a quiet street in the Chicago suburb of Highland Park, only a short walk from Lake Michigan, local resident Billy Corgan walked into a bustling room. It was the grand opening yesterday of Madame ZuZu’s, a Corgan-owned tea house, and a handful of friends and fans were on hand to help the native Chicagoan celebrate the occasion. To show his gratitude, Corgan treated those gathered to a short acoustic set of Smashing Pumpkins songs, while an overflow crowd watched through the clear-glass window out front.

“It’s an exciting day,” the singer told the group of 50 or so people huddled around him as if he were holding a press conference. The tea house, Corgan said, “has been a labor of love” – something created in his “idealized vision of what a Chinese tea house would have been like in the Thirties in Paris.” With black-and white-tiled floors, a classic Art Nouveau poster by Theophile Alexandre Steinlen gracing the back wall and 1930s jazz billowing from the speakers, Corgan envisions the small parlor becoming a community gathering place that encourages the open sharing of art and intellect, the singer told Rolling Stone over sushi shortly after his performance.

“I want it to be a social hub that’s interactive,” he explained. “You’re trying to draw in different people from different walks of life. We want a dynamic in there. We don’t want a passive space.” 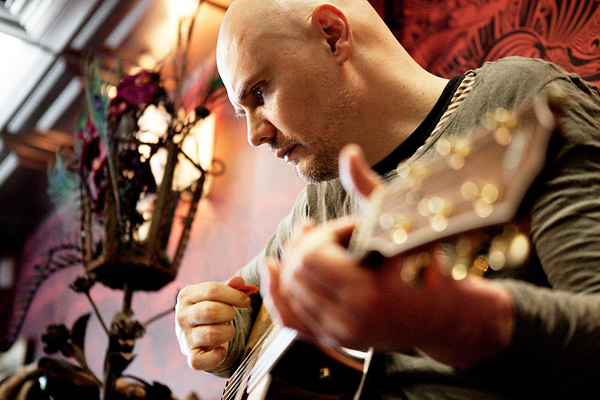 For his intimate six-song set, Corgan mixed newer material (“Celestials,” off the Pumpkins’ latest album, Oceania, and 2010’s “Song for a Son”) with time-tested cuts, including “In the Arms of Sleep” from the band’s epic 1996 double-album, Mellon Collie and the Infinite Sadness. He opened with “Jesus is the Sun,” which Corgan estimated he wrote in 1990 in Chicago’s Wrigleyville neighborhood. The highlight of the mini-concert came when Corgan brought up an old friend, Greg Bates, for a sing-along-inspiring duet on the Siamese Dream classic “Today.” Bates played guitar while Corgan took vocal duties, a circumstance reversed from the two friend’s first collaboration: Corgan said that he and Bates would write songs at his dad’s house back in “’84 or ’85,” but because he didn’t sing back then, he would write and Bates would sing.

Madame ZuZu’s isn’t Corgan’s first non-musical venture: The 45-year-old in 2011 co-founded a professional wrestling organization, Resistance Pro, that hosts regular events at a Chicago bar. The tea shop, though, is a project from which Corgan expects to derive personal satisfaction. “There are just those Tuesday nights where it’s like, rather than watch a baseball game on TV, I’d love to come down and hear somebody talk about homeopathy or archeology or see somebody’s art show,” he said. “And to have it right here in the community, I think was very attractive to me.”

Corgan also talked about his excitement at the positive reception that greeted his band’s latest album, Oceania, the first full-length offering from the current Smashing Pumpkins lineup. At the suggestion that it may have caught some listeners by surprise, Corgan said he believes he knows why. “A lot of people had written me off,” he said, bluntly. “I had all the skills; they hadn’t eroded.” He continues. “[Oceania] was the best received album since Mellon Collie. It was nice. But it doesn’t solve all the problems.” 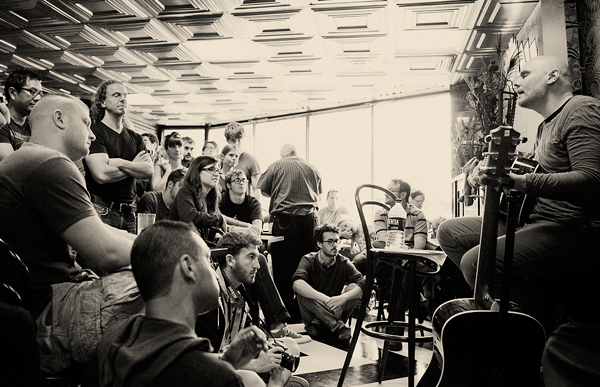