Bill Withers hasn’t released a new album since 1985 and he hasn’t played a public concert in so long he can’t even remember what decade it took place in, but the 76-year-old soul legend is alive and well, and he was quite psyched to learn this week that he’s finally been inducted into the Rock and Roll Hall of Fame.

“I still have to process this,” he says on the phone from his home in Los Angeles. “You know that Billy Joel line, ‘Hot funk, cool punk, even if it’s old junk, it’s still rock & roll to me?’ I’m happy to represent the old junk category.” That’s an insanely modest statement for the guy that wrote “Lean on Me,” “Ain’t No Sunshine,” “Grandma’s Hands” and many other stunningly brilliant songs. Some of those tunes will be performed at the induction ceremony, and maybe even by Withers himself.

32 Rock and Roll Hall of Fame Reunions That Actually Happened

Congratulations.
Yeah, that was a surprise.

Why’s that?
I hadn’t really thought about it too much. People would bring it up to me over the years. It was kind of odd to get nominated, and then it all happened in a very short time for me.

Who told you about it?
Of course, my wife Marcia told me. She communicated with the head of the Hall of Fame.

What was your reaction to it?
I was sort of surprised, but not too surprised. My wife had done a number on me and she’s such a positive-thinking person. I should have had a premonition. Not long ago Joe Walsh invited me to dinner with Paul McCartney. And then I got invited to the Oprah gospel brunch, so things were kind of steering out of my normal thing. I don’t know what that means, but it’s silly. It’s a nice surprise.

I just never felt that anyone owed me this.

Do you think this took so long because you’ve been out of the public eye for so long?
I never thought it was some kind of entitlement or something. It could have happened or could not have happened. I’m sort of in a different corner here. John Wooden at UCLA said, “Awards belong to the giver.” So, I never felt that I was entitled or somebody owed me that. If you think about it, it’s an odd collection of people, from Elvis Presley to Miles Davis, in the Rock and Roll Hall of Fame. I just never felt that anyone owed me this. It’s something that’s nice that happened. I guess I’ll have to go buy a suit.

So that means you’re definitely coming I take it.
Yeah, if I’m still here. I don’t take that for granted at this age.

Is there any chance that you’ll get on stage and sing a song or two?
I don’t know if I can or not, but I’ll find out between then and now. Maybe I’ll go to the gym and eat some wheatgrass or something and find out if I can do that.

So you’re open to the idea of it?
If I can, yeah. I don’t know. I’m just following the yellow lines painted on the floor.

I just watched the documentary Still Bill the other day, and at the end of the film you get onstage and sing “Grandma’s Hands.” You sounded amazing, so it seems to me that you still have your voice.
Well, that was some years ago. You never know what toll time has taken on my voice. You’re like my wife. You’re this optimist.

How often do encounter people that are surprised to learn you’re still alive?
Oh, man. My wife does my publishing and she has this office down on Sunset. At least once a month someone calls inquiring as to whether I’m dead or not.

How do you feel about that?
It’s interesting. Sometimes I wake up and I wonder myself. [Huge laugh] I have to tell you a funny story about that. A very famous minister, who will remain nameless, actually called me to find out whether I was dead or not.

Do you ever tell people that you’re Bill Withers and they don’t believe you?
Absolutely. One of my favorites was when I was in Roscoe’s Chicken and Waffles here in L.A. It was a Sunday morning and they had all these church ladies sitting in the booth next to me. I could tell they were church ladies because they had on those hats. They were talking about something about this Bill Withers song they sang in church this morning, probably “Lean on Me.” I was going to have some fun with them. I got up on my elbow, leaned into their booth and said, “Ladies, it’s odd you should mention that because I’m Bill Withers.” This lady said, “You ain’t no Bill Withers. You’re too light-skinned to be Bill Withers.” True story! I get things like that a lot. I think my obituary is already online.

When was the last time you played a concert?
There was this guy that now owns the Detroit Pistons, Tom Gores. He was celebrating his 40th birthday and his wife wanted to surprise him. She contacted my wife about me playing there. I kept saying “no,” and each time I did that they would raise the money. You figure this guy is worth a couple of billion dollars or so. When my nose started to bleed, I said “yes.” That was the last time I played, at Tom Gores’ birthday party.

When was that?
Some years ago. I forget how old I was. It was before I ruptured my Achilles tendon. I now calendar things around when I hurt myself. I remember the doctor saying, “Don’t plan on running any marathons at 66. I can fix it for you, but don’t run any marathons.” That was 10 years ago, so it must have been about a year before. Let’s call it 11 years. 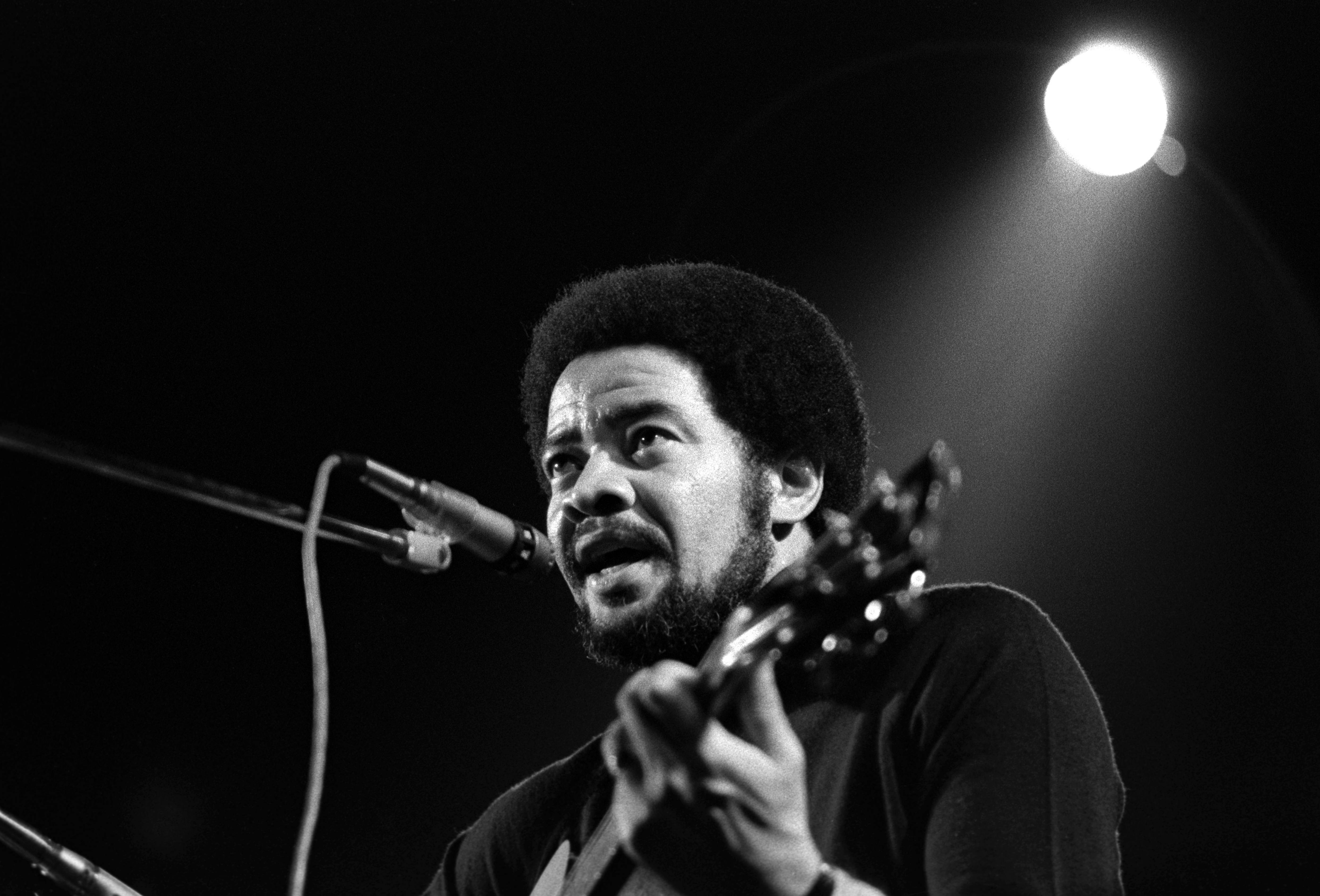 How about the last time you played a public concert?
Oh, man. I don’t remember.

Are we talking the 1980s here?
Probably, somewhere around in there.

The money you’ve left on the table for tours is pretty crazy. Are you ever tempted? Did you ever miss it?
Yeah, of course. But I also miss running for three hours and lifting heavy things. There are a lot of things that I miss.

Most of your peers love performing and touring. Why do you think you have such a different set of values than they do?
I was socialized well into adulthood. I was in the Navy nine years. I was formed before I started to do this. So, I think people that grow up their whole lives and were practicing their whole lives in the basement are different. Also, I was a severe stutterer until I was nearly 30. We couldn’t have had this conversation because the phone was, oh man, I avoided it at all costs. I wasn’t socialized to where that was how I validated myself.

Do you own the publishing on “Ain’t No Sunshine” and “Lean on Me?”
No. That was earlier stuff. In those days, if you signed a record deal they had this thing called inducement so you’d sign a publishing deal. But the copyright is starting to run out, so my kids can have some fun after I’m dead.

But you still profit off those songs when they’re used, right?
Oh yeah. That’s why I’m not checking your receipt when you leave the Home Depot [laughs].

Why stop making records?
I don’t think I stopped. I just play a different role now. I do fun stuff you probably don’t know about. Jimmy Buffett is my good friend. A few years ago he had his first country album called License to Chill. He called me up and said, “Man, I’m doing a country album. Why don’t you write a couple songs? You’re about as country as anybody that I know.” I wrote stuff like, “When you find out things about yourself that you already know/And your grandma calls and books you on the Jerry Springer Show/And you find out your wife and you might be related/Brother, your life ain’t over/It’s just simply complicated.” He’s probably the only guy that could do that line.

I want to walk around with my shirt off, oiled-up on a hot day and making women’s socks roll up and down.

You have a home studio. I know you have a distaste for the industry, but are you ever tempted to record a song and just post it on the Internet?
Well, I don’t know. I wrote this song called “I Am My Father’s Son” for the unveiling of Bill Russell’s statue in Baltimore and his high school buddy Johnny Mathis sang it. Then at Oprah’s gospel thing, my daughter, who does my demos, she sang that song. I guess I’m a situation guy now.

Do you ever think you’d release an album under your own name again?
I don’t know. It’s like you asking me if I’ll perform at the thing. I don’t know if I can. I’m an old man.

But you weren’t that old when you stopped.
I had fun doing other things. I built a lot of stuff. I learned masonry as a kid. I was fixing up some houses. I don’t know. I was just living. Then I had kids. Well, you can’t raise your kids if you’re in Philadelphia and New Orleans and Chicago.

So, putting aside the question of whether you physically can perform at the Hall of Fame, is it something that you would want to do?
Of course I want to play. We can get into “want to’s.” I want to pose nude in Playboy magazine if they still have one. I want to walk around with my shirt off, oiled-up on a hot day and making women’s socks roll up and down. There are some people that can sing in their later years and some of them that can’t. I don’t want to be on of those old guys that sounds like a gerbil trying to give birth to a hippopotamus. So, we’ll see. Now you’ve got me all motivated. Now, I’ve gotta see if I can’t conjure it up. One of my favorite shows is the Big Bang Theory. You know that episode where Sheldon is going to concentrate and try and make Leonard’s head blow up? [Laughs] I’m going to be like that.