In a summer where rap stars have thrown their hats into the ring like trucks at a demolition derby, Big Sean has been sidelined. His album was pushed back – shoved, really – after Yeezus dropped in; Wale, J. Cole and Jay Z have all put out Number One albums in the meantime. And while he’s sold tons of singles and outshined the lights on “Mercy” and “Clique,” he’s unfairly thought of as the short kid in the back row, the equipment manager to the football team. This summer, Sean wrote the second-most talked about verses on Drake’s “All Me” and his own “Control.” (This could also go for his girlfriend Naya Rivera’s “Sorry.”) And that’s been fine, because Big Sean has always just seemed happy to be nominated. Hell, his first four mixtapes and album were all titled Finally Famous.

Trent Reznor Says Kanye West Is Our Most Dangerous Entertainer

He and Def Jam are looking to change that. Over the past week, he’s been inescapable, throwing block parties in Cleveland, Houston, Boston, running through revolving doors in Detroit, New York and Vegas. Two nights ago, his face beamed out from three TV channels at once, including E!’s Fashion Police, where he quit telling a story of his humble beginnings to begrudgingly give Joan Rivers a, um, ‘hood pass. He and Adidas released their shoe, dripping in Italian leather, snakeskin and superlatives: “legendary,” “iconic” and “classic” are all used in the six-line website copy. On the cover of The Source‘s Power 30 issue, Sean’s wearing six gold rings like he’s Michael Jordan or, sure, Shabba Ranks. This sprint for sales hasn’t just been a promo run, it’s been a presidential campaign.

Still, old habits die hard. At New York’s Terminal 5 last night – a free concert provided by Hot97 and The Source – Big Sean had hits on hits. But he wasn’t quite sure what to do with the large stage given him, seeming most comfortable when someone else could share the space.

Otherwise, he was a man in constant motion but with few movements, stalking the stage as if afraid to step in puddles. Often, he’d face the audience in profile, which is to say he wouldn’t face the audience. A late appearance of a lion mascot (who threw up prayer hands) was very necessary as Sean obliterated “Don’t Like,” and “All Me.” It almost made one wonder if the lion slipped him something stronger than Wiz. 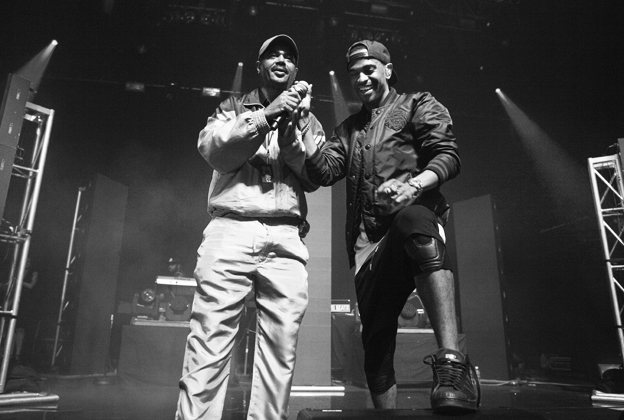 He stood surrounded by friends. Rita Ora and Calvin Harris hung around the VIP section; Steve Bartels and Shawn Pecas wandered backstage. The western edge of 56th Street had been choked off by kids wearing the full spectrum of IllAmerica, Hood By Air and Been Trill – a sea of black-and-white printed cotton. Big Sean, himself swimming in a tall white tee, said, “This is my first time performing a lot of these songs, so I might need your help remembering the words.” (He didn’t, but they knew them, regardless, even as he talked about “working like a Mexican.” Thankfully, he didn’t do “All Figured Out,” an otherwise-good song wherein he calls himself “Jesse Rackson” and “Rozay Parks” for sitting in the front of a plane.)

Prodded by the audience, he was helped immensely by his two drummers as well as his keyboard and bass players. For rappers, rare are the backing bands that actually help records sound better live, but Sean has managed to put together a group that exemplifies the difference between Campbell’s regular and chunky soups. Young Chop’s “Guap” beat, which tends to sound like Michael Scott on steel drums, transformed into a thunderstorm in paradise. With ground-shaking bass pounds on the off-beats, “10 2 10” could be played on a Viking ship. “Fire” and “Mona Lisa” predictably did well; “World’s Ablaze,” shallow in its emotional depth and unnecessary, still rode a twitchy beat that grew from boring to electrified.

After calling his father over from the side of the stage, Sean exhaled, “Man, I’m so fucking happy right now.” Later, with the entirety of the show under his belt, he looked spent, or at least relieved. Taking a moment to sit upon an onstage monitor, he said, “Seriously, this might be the happiest day of my life.”