More than a decade before the word “twerk” entered the global lexicon, Big Freedia had been proselytizing the dance and bounce music — an uptempo strain of hip-hop popularized in New Orleans in the early 1990s — throughout New Orleans and beyond. The rapper-singer earned national acclaim in recent years with Big Freedia: Queen of Bounce, a reality show on Fuse detailing Freedia’s struggles and successes, both personally (Freedia’s mom had battled cancer for years before passing away in 2014) and professionally.

But the show could only scratch the surface of Freedia’s life. In the new autobiography, Big Freedia: God Save the Queen Diva!, written by Freedia and co-writer Nicole Balin, the musician details her tumultuous upbringing marked by domestic strife and the fear of coming out as gay to her friends and family in an environment where gay men were killed for being out.

But the book juxtaposes these scenes with earnest humor. On her show, Freedia comes off as affable and grateful — belying her diva persona — and these traits are only solidified and expanded in the book. In this exclusive excerpt, Freedia details the coming-out process, the power of bounce music and why the offer to give Miley Cyrus twerking lessons still stands.

Michael Stipe: Coming Out Made Me a Better Person

I knew I was gay pretty much right from the start. I couldn’t explain why, but I just felt different. If my fascination with singing, baby dolls and my momma’s hair care products weren’t a dead giveaway, then the little flutter that surged through me when I saw cute boys — and not girls — was.

And from early on, I knew there was something very wrong with it. In my neighborhood, the message was loud and clear — faggots need not apply. The kids I know who came out to their parents got kicked the hell out of their houses.

There were whispers about homosexuals around the projects, like Sissy Gina, Sissy Shannon, Ronnie, Too Sweet, Mark Tavia (who became my gay mom when I was a teenager) and Sissy LeRoy. We all knew and called them sissies amongst other gays and they were very respected in the neighborhood. But you couldn’t walk around like today, talking smack about the guys who you want to suck off. Back then you’d be killed. I remember hearing people sneer about sissies and feeling that hole in my stomach because I knew that was me.

My mother had big plans for my 13th birthday party. Outside, in the backyard, she had decorated some foldout tables gold and black with carnation centerpieces. Tied to the backs of chairs and on our trees were black and gold ribbons and lots of matching balloons. When I came out of my room to help, Whitney Houston’s “I’m Your Baby Tonight” was blasting out of the speakers. The whole family —Crystal, Adam, Aunt Betty, Aunt Debra, Uncle Percy, Aunt Dawn, Donald, his kids, my cousins Leonard and Junior, Addie and his momma — were invited.

As people arrive, the pile of gifts on my table grew. I was lighting candles when [my best friend from childhood] Addie walked outside.

“Come on,” I said, and waved him over. We walked into the kitchen, where I hoped to steal a moment with him. “I’m gonna tell her today.”

Addie’s eyes got big. “Oh, Freddie, your momma gonna kill you.'”I could see the fear in his eyes.

“You sure you ready?” he asked.

“It’s time,” I said. “I can’t hide anymore.” Just then, Aunt Debra walked into the kitchen.

“Happy birthday, sweetie!” she said, putting her famous gumbo into the refrigerator and moving on to join the rest of the guests in the back.

Addie looked at me and said, “You’re so brave, Freddie.”

We went outside and I took my place at one of the tables. Momma had cooked for three days straight. The tables were loaded with all my favorites — grilled crawfish, fried chicken, smoked sausage and deviled eggs.

After dinner, Crystal and Ms. V came out of the house together holding up the most magnificent vanilla cake from McKenzie’s bakery. It was square and covered in blue, green and white frosting. Everybody sang “Happy Birthday.” As they placed it in front of me, I took a huge breath and blew out the candles — my wish was that one day, I could be myself.

Afterward we all danced and sang again, this time to my mom’s favorite Frankie Beverly & Maze album. At one point, I looked over at [my mom] and she was sitting alone. It was my moment. I was practically too big to do so, but I climbed on her lap like I had been doing all my life.

“You having fun, baby?” she asked.

She just looked into my eyes for the longest time without either of us saying anything, but my heart was pounding so hard I thought I’d faint. I couldn’t tell if she was irate or not since half the time when she was mad, her face didn’t move. “Baby, I already know,” she finally whispered.

“Yes, child,” she responded. I stood completely still waiting for her to rage at me or tell that I was going to burn in hell, but she didn’t. She just stoop up, hugged me hard, and said, “God got you.” Then she walked over to the table and sliced herself a piece of cake.

It was as if nothing had happened. It seemed to me there was some unusual whispering between my aunt Debra, my sister and my mom, but no one, except [my sister] Crystal, said a word to me. 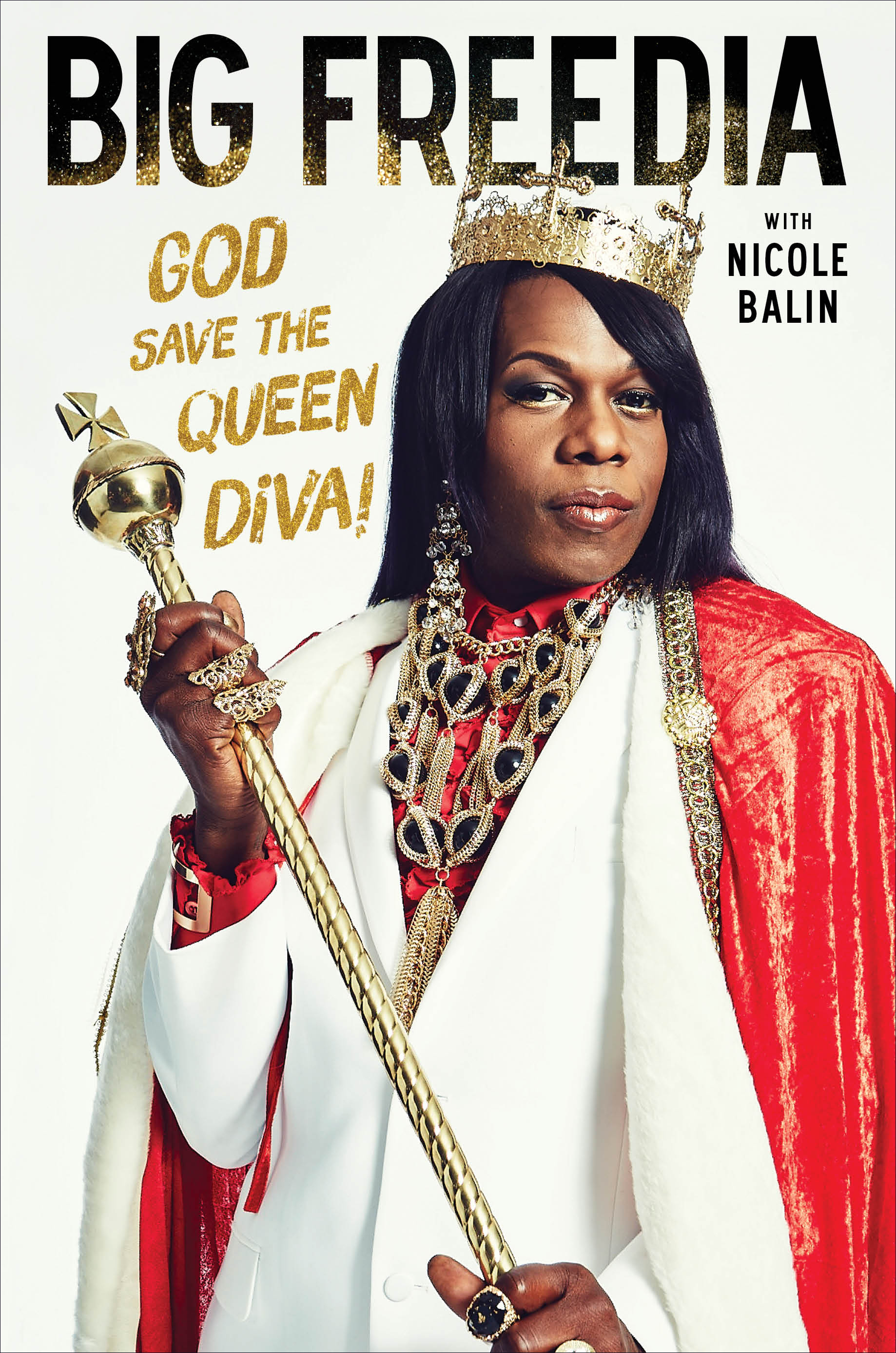 “Freddie, everything is gonna be okay.” She came up to me as I was finishing off some soda. I didn’t know what to think, but my sister’s reassurance was critical that night. I always knew Crystal was down for me.

Now, my momma. Could she be waiting to punish me later? I knew it wouldn’t just be forgotten.

I crawled into bed that night, full of corn bread and cake, feeling strangely serene that it had finally been said.

As Momma passed my room, she poked her head in the door. “Happy birthday, Freddie,” she said.

“Good night, Momma.” I replied. After she had gone, I pulled my blanket over my head and prayed. Dear God, I know this is hard for Momma. Please help her understand.

The next morning, Ms. V came in and sat on the edge of my bed. Her eyes were red and swollen. “Is it something I did?”

“Momma! No, of course not,” I reassured her.

“Did someone hurt you?” she asked.

Tears streamed down her pretty brown cheeks. “You’re choosing a difficult path, baby. But it’s your life,” she said.

I took both her hands in mine. “That’s just it, Momma,” I said. “I didn’t choose this. I have been this was since I was born.”

She shook her head like she didn’t believe me. “That’s not what God says, but I love you no matter what anybody says,” Momma responded. I felt relief and fear at the same time. Relief that she wasn’t going to throw me out but also apprehension because I knew what she was saying about a difficult path was right.

A couple of weeks after my birthday party, Sissy Shannon was found dead by the police in Van Mac Park. She had been beaten and a broomstick had been shoved up her ass. In no time, the news made its way throughout the projects. Came to find out, she was murdered by a guy who thought he was going to be exposed as her lover. I don’t know if my mom knew about it or not. We never spoke of it. Poor Shannon. She paved the way for sissies like me.

A lot of people think Bounce is simply a booty-shaking dance from the ghetto, but Bounce is as shallow or deep as you want to make it. The groin area has extraordinary power. Moving it at lightning speed is more than sexual; it’s also deeply intimate and transformative. For us sissies, who lived under such constant oppression — the violence, poverty, and homophobia — Bounce is our way to transmute that pain into joy.

On August 23rd, 2013, Miley Cyrus twerked onstage with Robin Thicke at the MTV Video Music Awards. This fucked up the music industry for damn near a month. It’s all anyone was talking about, and it led people to wonder about the origins of this dance move. The obsession with booty shaking had been growing, but Miley made twerking mainstream. It became an entry in Merriam-Webster‘s dictionary and now is a term every suburban mom knows.

The media went crazy over it and it generated a lot of press for me. I went on National Public Radio, Totally Biased With W. Kamau Bell, Watch What Happens Live, HuffPost Live, BuzzFeed, and a slew of other outlets that wanted to know about the origins of this phenomenon that we’d been involved in at block parties since I was in diapers.

Of course, everyone wanted to know where I stood on the appropriation of black culture, and like I said, I don’t like to get too heady with these things. I know others can see it from that standpoint, and I prefer to leave it to them to break down. That said, I want our culture to be credited. It’s a sensitive topic since so much black culture has been exploited by the dominant culture. I really appreciate the writers who came to me for some context and background on Bounce. Regardless, it was an amazing boost for me at the perfect time, right before Season One of my show, and so I can’t thank Miley enough. And the offer still stands for twerking lessons, baby.

From BIG FREEDIA: GOD SAVE THE QUEEN DIVA! By Big Freedia and Nicole Balin. Copyright © 2015 by Freddie Ross, Jr. Published by Gallery Books, a division of Simon & Schuster, Inc. Reprinted by permission.