At first it seemed like an unfortunate union: Best Coast, the placid and reverb-soaked surf-pop duo that represent laid-back Los Angeles incarnate, headlining one of the most severe, astringent venues in New York. Yet playing the 3,000-capacity Terminal 5 hall in the Hell’s Kitchen area of Manhattan – a mammoth cube of chains and steel, with two tiers of balconies that seem to tip iridescent waterfalls of beer onto the main floor as often as they don’t – was a euphoric moment for the duo. As singer-guitarist Bethany Cosentino cheered several times from center stage, “This is our biggest show of all time!”

Best Coast valiantly brought some of their characteristic undemanding warmth to their stark surroundings on Tuesday night. To spark sing-alongs immediately, Cosentino and multi-instrumentalist Bobb Bruno dove heavily into the seeping reverb and girl-group-style hooks of their debut, 2010’s Crazy for You – deceptively buoyant, ultimately brokenhearted fare that, under the rich jewel-tone lights of Terminal 5, still snapped with lo-fi earnestness. Opener “The End,” delivered faithfully with a slightly halting interlude (the band audibly adjusting to a sluggish sound mix), segued easily into “Crazy for You,” which saw the largely collegiate-age audience chanting in commiseration with Cosentino’s drawled lines, “Want to hate you but then I kiss you/ Want to kill you but then I’d miss you.”

Cosentino’s lovely, unerring vocals – peppered often, but not overbearingly, with a vulnerable hitch – sounded newly spacious atop the live support of Bruno and two touring musicians. Her confidence carried the set, which highlighted Best Coast’s songwriting assets – a sharp ear for pop hooks and succinct delivery – yet also exposed the repetition in their catalog: their favored walking midtempo, the familiar swells and mewled fade-outs. Selections from their recently released second album, The Only Place, lost some of the original clarity of Jon Brion’s production; though the emphatic washes of guitar sounded great bouncing around Terminal 5’s steel beams, they made the pleasantly power-pop, crunchy guitar intros less pronounced. The astute ballad “How They Want Me to Be,” a note-perfect summation of wanderlust and early-twenties discontent, was a set highlight delivered with affecting sincerity, and the simmer of “No One Like You” worked a bit too well on a few gentlemen in the pit, who promptly started shoving each other until Cosentino scolded them from the stage. “No fighting! No fucking fighting at Best Coast shows! Just have fun,” she commanded, and they listened. 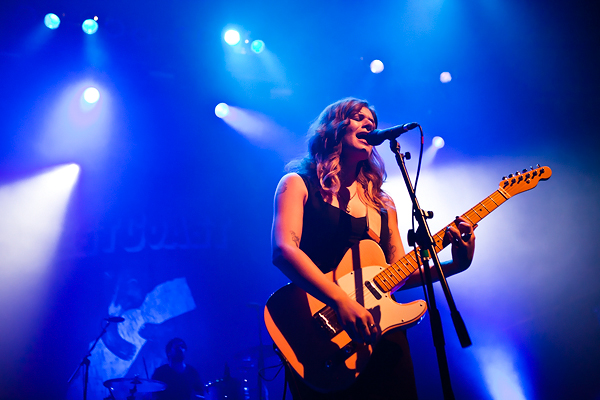 After their scarcely 50-minute set – a holdout move from their garage-band roots – the band regrouped for a languid, five-song encore punctuated with Cosentino’s disarming gratitude. After reminiscing about Best Coast’s first New York show in the minuscule Lower East Side club Cake Shop, she told her audience, “You guys have brought us to Terminal 5 a few years later. Thank you.” The group then launched into  Fleetwood Mac’s “Storms” (a cover released this spring as a limited-edition seven-inch), and their take on the Tusk track was exquisite. Stripped clean without much percussion, Cosentino’s fluid bending of Stevie Nick’s folk melisma suggesting both a clear love of the band and also a readily available new genre for her to explore someday, while Bruno’s sparse ripples offered welcome, pensive underpinnings. Lighters rose throughout the venue, adding extra poignancy to the reverent tribute and an unexpected treat in itself: it’s been awhile since the hyper-trendy Terminal 5 saw flames that weren’t simulated on smartphones. Best Coast didn’t even have to close with their breakthrough hit “Boyfriend” – they had already convincingly delivered Southern California to Hell’s Kitchen. But it certainly didn’t hurt.