Ben Folds has launched a new podcast, Lightning Bugs, in which he discusses creativity with guests from the worlds of art, science, public policy, and music — and writes a song with each guest at the end of every episode.

Lightning Bugs premieres Thursday, April 8th, and the first episode features anthropologist and author Augustín Fuentes. The show is available on all podcast providers, while a special video simulcast of the premiere is also streaming on YouTube. New episodes of Lightning Bugs will be released on Thursday.

Lightning Bugs was inspired by Folds’ 2019 memoir with the sort-of same name, A Dream About Lightning Bugs. In an interview with Rolling Stone, Folds said that when he began writing his memoir, he chose to center it around questions of creativity: not necessarily to answer them, but to at least find possible clues as to what fueled those impulses. Lightning Bugs will similarly seek to explore the different ways creativity manifests and functions for people in different fields.

“I’m curious about what makes other people’s creativity tick,” Folds said. “I cast a wide net with guests. Some theorize and concentrate on creativity in general. Some create and don’t know why. In addition to our conversation, I want each guest to make something with me — a song — so that we can walk the walk as well. Nothing big. They give me an idea, a phrase, anything, and I finish it up, putting it at the end of the podcast for fun.”

'It's All Respect, It's All Love': Hailey Bieber Denies Any Feud With Justin's Ex Selena Gomez

“He argues in his book, The Creative Spark, that what sets humans apart, and contributed to our evolution and survival, was creativity,” Folds said. “That’s our superpower. Ideas. And he doesn’t say that we’re the only creative species, only that we stand out in that department. It’s a good general brush-up on evolution, viewed through a very realistic lens. We’re not that fast, strong, or tough. We have ideas. And how does this make an argument for the arts? The arts are the training ground, the playground, and the laboratory for pure creativity.”

As for the show’s unique hook, Folds said the songs he writes at the end of each episode with his guests are great exercises for his own musical creativity. But they’ve also been helpful as he hones his skills as an interviewer.

“My guiding light is that I’m trying to find the song in the guest, the subject, in the interview,” he said. “I’m finding my way in that way. What is the song of my talk with Josh Groban? Or with Marianne Williamson? How do I boil it down? Is it possible to do so? Or will it just be a fun ditty? Each song is different, but my personal observation skills are sharper when I’m considering what nugget makes a song. That makes me appreciate my skill as a songwriter. And that creative skill is becoming my main tool to becoming an interviewer.” 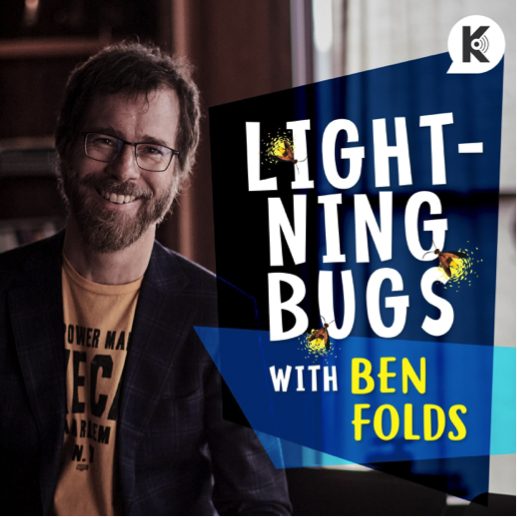