Beck‘s most unusual release, the sheet-music collection Song Reader, will get a recorded release on July 29th – but Beck himself is singing only one of its songs. The record, titled Warby Parker Presents Beck Song Reader, will instead feature studio recordings of Song Reader’s 20 tunes as interpreted by Jack White, Jack Black, Jeff Tweedy, Fun., Norah Jones, David Johansen and more, alongside one song, “Heaven’s Ladder,” by Beck, who coproduced the compilation with Wes Anderson and Martin Scorsese music supervisor Randall Poster.

The album’s release ties into the debut of Beck-created, limited-edition “black cherry” Carmichael eyeglass frames by Warby Parker, which is producing the album. (The album will be released by Capitol Records.) The company is also putting out a new edition of the Song Reader book with two new prints from artist Marcel Dzama. The eyewear company previously produced the Song Reader concert that took place in Los Angeles last fall.

“Like a kid getting a special package in the mail and opening it up with anticipation, these interpretations of songs from the Song Reader book have surpassed what I could have imagined when putting the book together,” Beck said in a statement. “The book addressed the idea of a song in its most elemental form, letting others give it a voice. It amazes me to hear how these musicians have made the songs their own and in the process revealed that the interpretation is the living breathing soul of the piece. These interpretations have made the book something new, something better.” 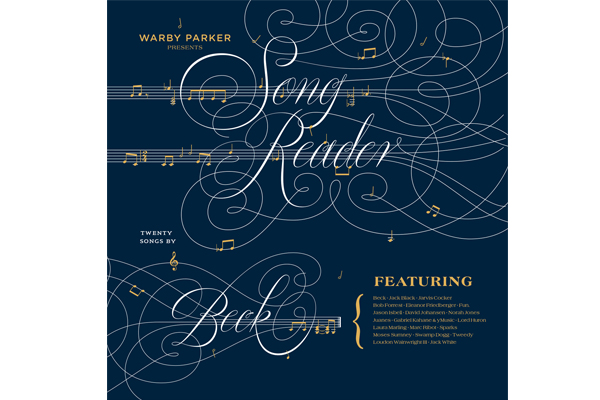 “I was captivated by the notion of working with Beck to bring the entire Song Reader collection to life, enlisting some of our favorite artists to celebrate a great American creative activity: playing music from the sheet,” producer Poster said. “Beck seemed to channel so many American popular idioms; it was an artist’s feast. We have, I think, been lucky to share these great songs with one another and now with music lovers throughout the land and throughout the world.”

Beyond marking the first official recorded release of Song Reader’s tunes, the artists and Warby Parker are donating proceeds from the album’s sales to 826 National, a nonprofit organization that helps students ages 6 to 18 with creative and expository writing at various locations around the United States. Additionally, the eyewear company will distribute a pair of frames to someone in need for every pair of Beck’s frames that sells, as part of the company’s “Buy a Pair, Give a Pair” program.

“We love the idea of taking an old-school format and making it new – which is what initially got us so excited about Beck’s Song Reader,” Neil Blumenthal, co-founder and co-CEO, Warby Parker, said. “The project’s creativity, originality and innovation made it a clear fit for us, and a fantastic platform for a broader collaboration. We’re extremely excited to announce the Beck Song Reader album, as well as to reissue limited-edition Beck collaboration Carmichael frames and a new edition of the Song Reader book.”