At 54 years old, the venerable Newport Folk Festival is as much an institution as it is the godfather of summer festivals. Where the trend these days is for congested mega-fests, Newport’s lineup has always felt curated, not cobbled together.

Like any festival, however, Newport saved its biggest names this year for last, and they didn’t disappoint. Rising Americana stars the Lumineers brought it to the people, literally, leaving the stage with the whole band and performing a couple songs among the audience, who sang along heartily.

And Beck, the Sunday headliner, looked like a baby-faced mortician in his black suit, hat and Wayfarers, joking about “oppressive folk dirges.” Sticking to many of his past hits, he drew heavily from Sea Change and Odelay, playing acoustic versions of “Loser,” “The Golden Age” and “Jack Ass.” He also payed homage to the Newport tradition of collaboration, jamming with Ramblin’ Jack Elliot, Chris Funk, Annalisa Toornfelt and whistle maestro Andrew Bird on Jimmie Rodgers’s “Waitin’ for a Train.” As the sun was setting on another year of the fest, he closed with an encore version of “Where It’s At,” to which everyone in attendance knew the answer: for that moment, they were where it’s at.

For the first time, Newport expanded to a three-day event, opening the gates at Fort Adams State Park, a former Army base dating to 1799, on Friday afternoon. Surrounded by the harbor and Narragansett Bay, it’s a tradition for hundreds of boats to anchor just offshore to take in the main stage. 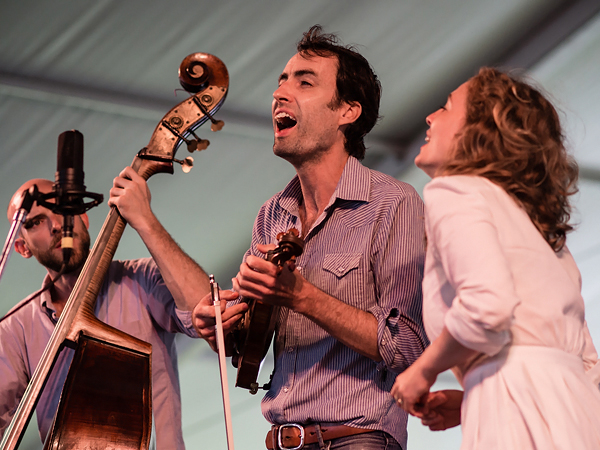 Friday was gray and cold and raining off and on, but that didn’t dissuade any of the musicians. Boston’s Kingsley Flood kicked off the main stage, shirking the rain with puddle-splashing, foot-stomping folk rock and their signature high energy. Inside the museum stage, the Low Anthem hosted Newport Homegrown, a selection of up-and-coming Rhode Island bands with standouts including Vudu Sister’s early-Nirvana vibes and Last Good Tooth’s alt-rock-by-way-of-the-Animals sound.

Twitter aficionado Amanda Palmer’s set in the joyfully dry harbor tent saw her jamming on her ukulele and bringing her father onstage to join in Leonard Cohen‘s “One of Us Cannot Be Wrong,” which may or may not have prompted a bit of parental competition: at almost the same time in the quad, the mother of Deer Tick frontman and de facto mayor of Newport Folk Fest John McCauley jumped onstage during his acoustic set wearing a T-shirt proclaiming her pedigree and joining him on Jimmy Buffett‘s “Margaritaville.”

On the main stage, Feist played to a crowd huddled under umbrellas punctuated by swatches of colored ponchos, circling through hits and lesser-known tracks and complementing the gloomy weather with her voice. She was followed by the Old Crow Medicine Show, whose souped-up, Bob Dylan-penned hit “Wagon Wheel” had everyone in attendance bobbing along. That spirit lasted through their encore, the last song of the day, a cover of Tom Petty’s “American Girl.”

Following the festival’s closing each day –a fairly early seven or eight p.m. – attendees were greeted with a couple of late-night options. At the Jane Pickens Theater, Dawes held a benefit for the venerable venue with guest appearances over two nights from Blake Mills (whom they had backed at the festival), the Milk Carton Kids, Old Crow Medicine Show, Father John Misty, Phosphorescent, Jim James and more. 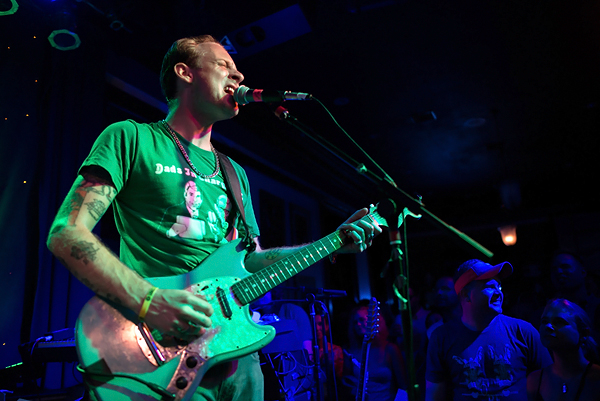 The real after-party, however, has become Deer Tick’s tradition of cramming capacity crowds into the Newport Blues Café downtown and raging late with a selection of friends and family. This year all three nights sold out “in a matter of minutes,” according to the band’s manager. Highlights included antifolk OG Langhorne Slim playing from within the crowd’s sweaty mass; a surprise set from Phosphorescent (who covered a Willie Nelson‘s “Reasons to Quit”); free Cutty Sark; Jason Isbell opening for and sitting in with the band; Deer Tick playing their new album, Negativity, from start to finish; Dawes’ Taylor Goldsmith joining for a Dylan cover, and, well, to be honest, the rest is a haze of yelling and dancing and sweating.

Saturday dawned hot, sunny, and humid, thankfully pushed back by a salty breeze wafting in from the sailboat-speckled ocean. Early moments included Jim James engaging in a staring contest with Folk With Funk host Chris Funk, Hooray for the Riff Raff’s rendition of Harry Nilsson’s “Everybody’s Talkin’,” Nicki Bluhm and the Gramblers joining forces with Spirit Family Reunion on the main stage, and Langhorne Slim’s folk-rock energy blast to wake everyone up.

Inside the museum stage, country rocker Joe Fletcher compiled a stunning Who’s Who of up-and-coming and already-established Tennessee talent for the Nashville to Newport show – three and a half hours of music from soon-to-be-legendary guitar man Patrick Sweany, Shelly Colvin, Joshua Black Wilkins, a special surprise set from the Toy Soldiers (who’re from Philly, but we won’t quibble), Amanda Shires and more, all culminating in a mass sweaty singalong with Fletcher and his band, the Wrong Reasons.

The harbor stage saw Newport standby Jim James playing spacey, ethereal tracks off of his Regions of Light and Sound of God album. Trombone Shorty brought some Dixieland jams with the most ridiculously danceable set of the day, and headliners the Avett Brothers jammed so furiously it sounded like bluegrass infused with pop-punk, raging through traditionals like “Old Joe Clark” as well as their hits, bringing it to an end with “I and Love and You” to the swooning of the hot and sated crowd.

Other highlights included Colin Meloy bringing out the rest of his band mates in the Decemberists (who performed as Black Prairie on Sunday), Father John Misty transfixing every lady in the quad with his dance moves and Houndmouth teaming up with Dawes’s Goldsmith for Dylan’s “I Shall Be Released.” 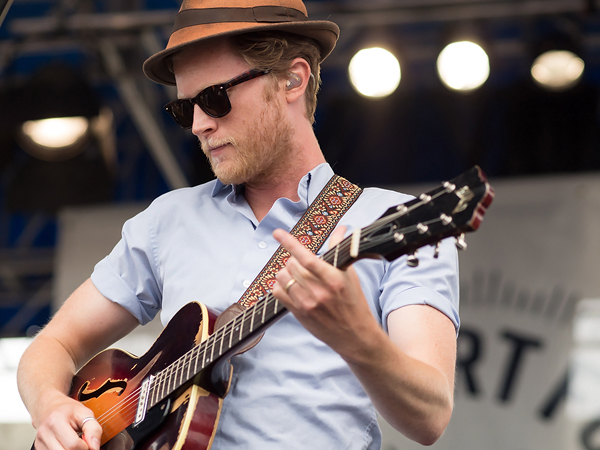 On Sunday, hours before their official set, the Lumineers performed a couple of surprise acoustic songs and took audience questions at the Folk With Funk session. Folk legend Michael Hurley performed with Black Prairie as his backing band. The Berklee Gospel Choir gave the Lord’s day a proper ringing-in. And fittingly, 82-year-old Ramblin’ Jack Elliot, who recorded at Newport way back in 1968, showed that he’s still got it.