Beatles tribute shows have been happening since the band stopped playing, but many veer on parody, with moptop costumes and failure to execute the band’s complex studio arrangements live. Every Thanksgiving weekend in the Northeast, there’s an exception: More than two dozen of New England’s top artists gather for Beatles Night, an arena-size set leaning heavily on late-period songs the Beatles never attempted in concert, with stacked harmonies and full horn and string sections.

At the center of the stage Saturday night at Portland’s State Theatre was keyboardist-singer Spencer Albee, whose layered psychedelic pop is frequently an inventive extension of Paul McCartney‘s. Albee played keys in Rustic Overtones (who collaborated with David Bowie on their 2001 LP ¡Viva Nueva!) before spending the last decade releasing underrated projects like the Popsicko, As Fast As and a recent solo album. Albee is big enough in Maine to fill the 1,700-seat theater on his own, but he rarely plays outside the state after fizzled major-label deals with Arista and Octone. He started Beatles Night in 2002 at the tiny Portland club the Big Easy, playing albums like Revolver or Abbey Road in their entireties every year. “I love playing their music with their true spirit in mind,” says Albee. “I can’t stand all the shitty Beatles ‘tribute bands’ out there. Yes, you have a wig and a blue Sgt. Pepper coat, but you’ve lost the vision.”

Instead of a full album, this year featured a grab bag of classics. Albee began with a howling “Sgt. Pepper’s Lonely Hearts Club Band,” over swelling horns and a slightly slower rhythm than the recording, giving it an unexpected urgency. That segued into “With a Little Help From My Friends,” sung by drummer Charles Gagne. 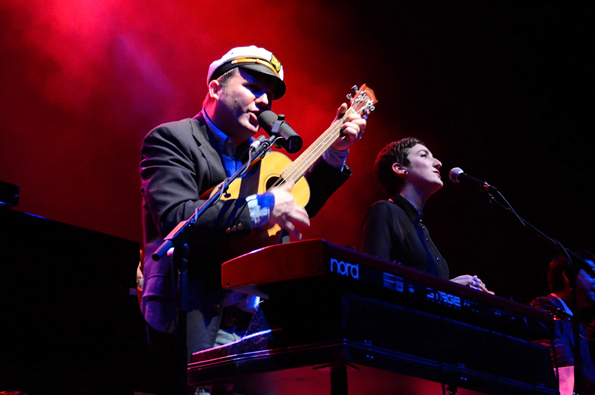 The event was tailored for Beatles buffs; early in the night, soul powerhouse Kenya Hall belted Stevie Wonder‘s 1970 version of “We Can Work it Out” over a time-shifting funk bounce and manic background vocals. Soon Albee nailed the falstetto in McCartney’s solo stomper “Too Many People,” which transitioned into the forceful descending riff of the Traveling Wilburys’ “Handle With Care,” sung by Sara Hallie Richardson.

Other guests revolved throughout the night. Psych-rocker Jeff Beam nailed the smoky, winding melody of “Sexy Sadie,” while Dominic Lavoie delivered “Revolution” with fury before singing John Lennon‘s “Watching the Wheels,” which featured three keyboardists onstage. Sixties soul fanatic Zach Jones brought the balcony crowd to their feet with a chilling “Something” before Melvern Taylor delivered a sweeping ukulele version of “Across the Universe.” Late in the night, Rustic Overtones frontman Dave Gutter took the stage in a long overcoat, saying “I’d like to turn up the guitars for this one” before launching into “Helter Skelter,” unleashing his gravelly howl over a feedback haze.

All the while, Albee and guitarist Sean Morin held down the band, executing each arrangement with laserlike precision, from the piccolo trumpet and Mellotron parts in “Penny Lane” to marimba on “Live and Let Die.” Albee closed the main set belting McCartney’s Scottish prayer “Mull of Kintyre,” which saw the general admission floor part for a full bagpipe band, performing in the middle of the audience.

The Beatles remain the toughest band in the world to cover; it even took McCartney decades to learn how to pull his own songs off live. But this show proved those songs can live on long after he stops.