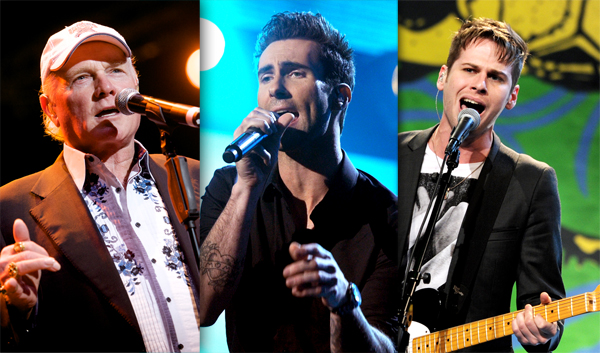 The Beach Boys‘ 50th anniversary reunion is set to begin this weekend at the Grammy Awards with a performance featuring guest appearances by Maroon 5 and Foster the People. The surviving members of the band’s classic lineup – Brian Wilson, Mike Love, Al Jardine, Bruce Johnston and David Marks – will make their first appearance on stage together in more than 20 years.

It’s unclear exactly what Maroon 5 and Foster the People will be doing onstage with the Beach Boys, though it seems likely that their own hits will be included as part of a medley. So yes, there’s a good shot that the first Beach Boys set in over two decades will include renditions of “Pumped Up Kicks” and “Moves Like Jagger.”

The Beach Boys aren’t the only major stars teaming up for the broadcast on Sunday night. Coldplay and Rihanna are set to perform their Mylo Xyloto tune “Princess of China,” Kelly Clarkson and Jason Aldean will sing their hit duet “Don’t You Wanna Stay” and Foo Fighters, Deadmau5, Lil Wayne and David Guetta will perform a tribute to electronic music. Bon Iver, who are nominated for Song and Record of the Year, backed out of performing at the ceremony after frontman Justin Vernon objected to being forced to share a stage with other performers.