AWOLNATION singer Aaron Bruno had a challenge for fans as he prowled the stage Thursday night at the band’s Los Angeles hometown show at Club Nokia. “Who’s going to be the first to crowd-surf tonight?” he said, blond hair hanging across his face as he picked up an electric guitar. And when someone predictably shouted for the stormy hit “Sail,” Bruno playfully replied, “If we played that song now, what would you look forward to later?”

It was a momentary pause in the band’s muscular wall of pop melody, blending electronics with thrashing rock guitars for a 90-minute performance. The sound onstage was tougher than the same songs as heard on last year’s AWOLNATION’s debut, Megalithic Symphony. Bruno showed his punk-rock bona fides with vocals that erupted from a wail to a scream, plus a round of surfing above the crowd during “Jump on My Shoulders.”

Fans tossed the occasional glow stick to the stage, but the electronics in AWOLNATION were often in the background as Bruno and the band ripped into something closer to hard rock rage. While the affectionate, gospel-flavored “All I Need” had fans swaying arm-in-arm, a slashing “Not Your Fault” was played by five band members bent over their instruments like metal players. “Burn It Down” ignited a furious storm of bodies thrashing on the dance floor. 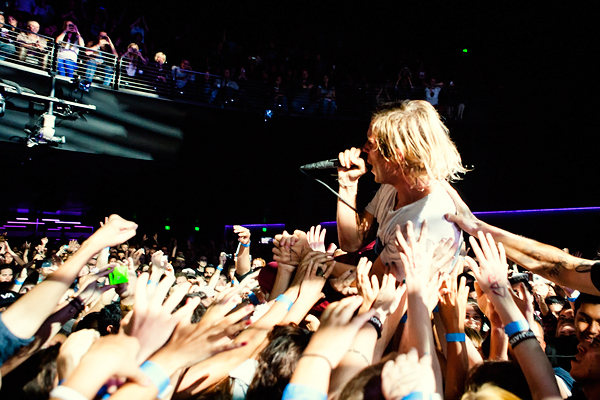 The first impression left by “Sail” (which hit the Top 10 of Billboard’s U.S. rock and alternative charts) is of a band that’s mastered a delicate, modern pop balance of synthesizer swells and fuzzy rock guitars, sounding like a more frenzied version of Phoenix, with bits and pieces of LCD Soundsystem experimentation, contemporary soul and the hardcore that obsessed Bruno as a teen. The song came late in the set, amid synth riffs and Bruno’s panicked delivery, and included a shouted call and response with the crowd: “We are AWOLNATION!”

Before the night was over, the band drifted offstage as Bruno kneeled on the stage floor and had the lights turned down low for an impromptu bit of a cappella on Bill Withers’ “Lean on Me,” a 40-year-old tune that had even the youngest fans singing along to the chorus. “These are the kinds of shows you dream about when you’re writing songs,” Bruno said.

For the singer, AWOLNATION is the latest in a series of bands, following close calls with success in Hometown Heroes and Under the Influence of Giants. It’s also the first act he’s created with himself in total control of its sound and direction, without outside interference. The singer-songwriter still hesitates to embrace the acclaim. “You always wonder if anyone is going to show up, and if your friends are going to bring a few people,” he told the crowd packed on the Nokia dance floor. “It’s been a weird journey.”

Backstage soon after, Bruno relaxed after a quick shower and talked to Rolling Stone about the unexpected rise of AWOLNATION. The next morning, they would be on a plane to Mexico City, followed by another month of North American and U.K. dates. 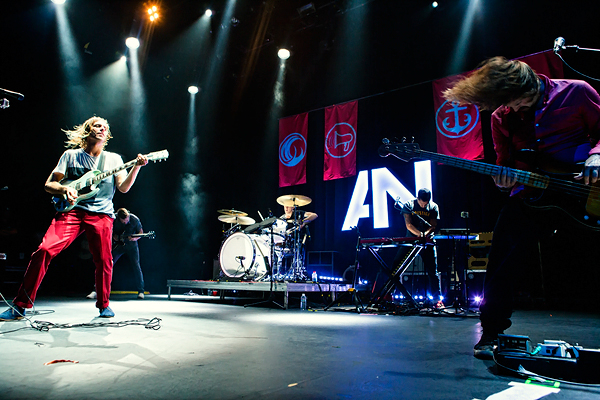 The band performed three new songs on Thursday – “Cannibals,” “This Kid Is Not Alright,” and “Some Kind of Joke” – that Bruno says are already recorded for a future release, though the ongoing success of Megalithic Symphony keeps delaying plans for another album. A third single, “Kill Your Heroes,” was just released, and there are rumors of a fourth.

“I never thought ‘Sail’ was going to be a single,” Bruno said. “It was just a song that felt very haunting and very special to me. I didn’t think this weird droning, hip-hop influenced scream anthem thing would get on the radio ever.”

His hesitation comes from experience. In other bands, he’d been signed to major labels, enjoyed some initial radio airplay and smoked Cuban cigars with Jay-Z, only to see his dreams collapse in disappointment. After the Giants broke up, Bruno considered trying his hand at pop songwriting for hire, just to stay connected to the music business. He created AWOLNATION instead.

“I never understood why I was on the journey I was on, and why I had heartbreak, why I felt like I’d matured as a songwriter and a performer but why no one else was gravitating towards that same realization that I had,” said Bruno, who grew up in around the same Los Angeles County suburbs (Agoura Hills, etc.) that birthed Linkin Park and Incubus. “I just kept my head down and made this record.”

The response has been surprising and intense. In some cities, young followers climbed up for some epic stage-diving. Others came in old T-shirts for his former bands: “Every once in a while, you run into someone that’s like, ‘Why are you doing this? I liked the last band so much more.'”

Bruno is thinking hard about the next album and how to grow the AWOLNATION sound, building on the songs recorded for the debut. “I feel like I’ve been writing it my whole life, gathering different ideas along the way,” he said. “It was three or four years ago when I started honing in on this AWOLNATION thing and realized maybe there was an audience for this.”