“This is the rehearsal, right?” Thom Yorke joked last night from an old ballroom stage in Los Angeles, leading his band Atoms for Peace through a surprise show and two hours of intense rhythm and euphoria.

This was no casual practice, but a full set in preparation for a summer tour of Europe that begins July 6th in Paris, followed by U.S. dates in the fall. Yorke was joined by keyboardist-guitarist Nigel Godrich, bassist Flea, drummer Joey Waronker and percussionist Mauro Refosco, sharing the results of a month of rehearsals in L.A.

The setlist was drawn mostly from the band’s Amok and Yorke’s solo album, The Eraser, both produced by Godrich, the frontman’s essential collaborator and producer of Radiohead. The sound was more about inspired clatter than sweeping Radiohead melody, as the band slipped into trance rhythms like jazzmen deep in the groove.

“Congratulations on getting in,” Yorke said, unshaven in a sports jersey, his hair pulled back into a small ponytail, to a crowd of guests and fans who won tickets by lottery. The night’s location was kept secret until late that afternoon. It was finally revealed to be a wing of the city’s old school Fais Do Do nightclub, renamed “Club Amok,” where the red brick walls were papered over with band signs and fliers. 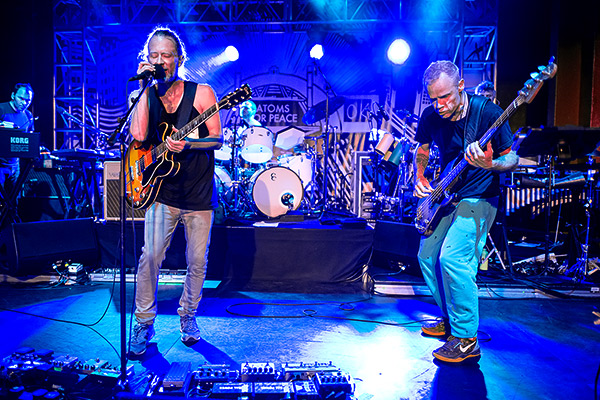 Soon Yorke was at a keyboard to tap out the urgent piano melody of “The Eraser,” with Godrich singing harmony from behind his station of keyboards and electronics. “The Clock” was a collision of bluesy twang and electronic pulse, with Refosco and Waronker layering beats and ticks at hyperspeed.

Throughout the set, Yorke’s wail crashed ecstatically against Flea’s percussive basslines. The Chili Peppers bassist was in a different mode in Atoms for Peace, plucking a limber, eccentric rhythm on “Black Swan,” rolling his head and clearly feeling every beat.

For “Dropped,” Refosco tapped an anxious pattern on marimba, as Yorke sang nervous and vulnerable: “Wandering, stumbling, I don’t wanna start . . .” As the music intensified, the dancefloor began to bounce beneath the crowd.

On the song “Atoms for Peace,” Yorke’s forlorn cry rode a swelling current of bass and beats. He played a clipped funk guitar solo (a rarity for AFP) on “Stuck Together Pieces” and posed for the many camera phones held up above the crowd, giving a sarcastic thumbs-up.

For the night’s second encore, Yorke stepped out alone with an acoustic guitar to play a delicate “The Present Tense,” but when crowd chatter continued on, he barked angrily, “Who the fuck is talking?” It was a reasonable question on a night of concentrated beats and passion, delivered gratis from a team of sound scientists who were there to be heard and don’t know how to make background music. 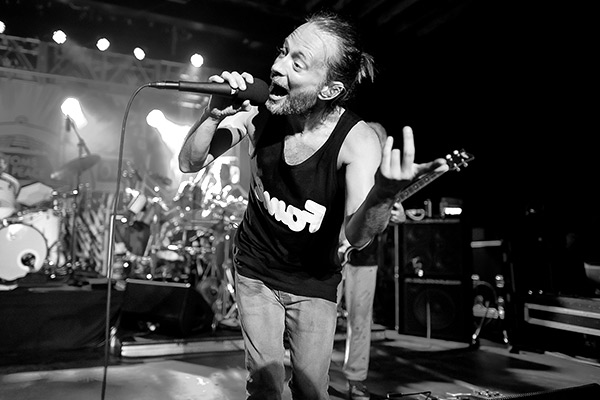