Kendrick Lamar asked that the crowd at his Saturday night set at the Austin City Limits music festival grow from an “8.5” noise level to a “10.” After the roar he announced with pride that Austin hit an unprecedented “15.”

Behind the Scenes at Austin City Limits

Lamar is still steaming hot from last year’s blazing release good kid, m.A.A.d city, and his performance at the 12th year of ACL represents an affirmation of his place in hip-hop and the vibrancy of both the artist and the festival that booked him. Some trepidation greeted the announcement that Austin’s most well-known outdoor festival would expand to two weekends in 2013, though it remains to be seen whether or not it was Lamar’s coaxing that echoed the loudest.

Friday
Local Natives have a stake in both raucous and slower soul-bearing numbers, and the increasing maturity from 2009’s debut Gorilla Manor to this year’s Hummingbird (produced by the National‘s Aaron Dessner) is evident in their live performance. Newer tracks “Colombia” and “Mt. Washington” – the latter about L.A., but dedicated here to Austin – soared, and a cover of the Talking Heads‘ “Warning Sign” featuring an a cappella three-part harmony was a festival highlight. 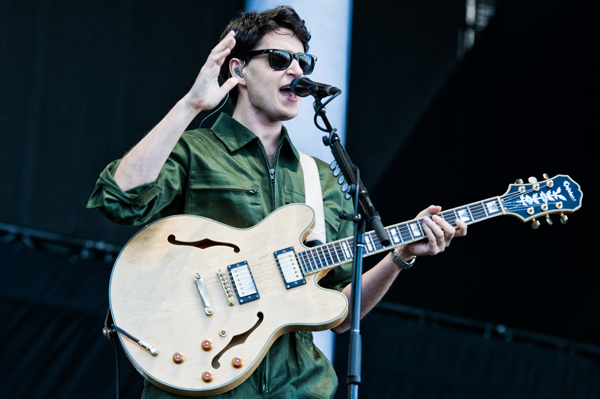 Across the park, Vampire Weekend played to a young crowd who took the band’s winking Ivy League aesthetic as a not-so-subtle lifestyle suggestion. “Since the last time we saw you we got a mirror,” said lead singer and guitarist Ezra Koenig of his band’s rather large stage prop, “and released a new album.” This year’s Modern Vampires of the City is less dependent on the band’s agoraphobic take on world music that sprung them into stardom, instead featuring a wider palette of sounds. Live, the electronic “California English” was rendered faithfully, as were early favorites “Oxford Comma” and “Cape Cod Kwassa Kwassa.”

Depeche Mode headlined Friday night with a 90-minute set that featured extended explorations of fan favorites and a smattering of new material. Lead singer Dave Gahan strode the stage with aplomb and fearlessness, tossing his microphone stand and bending his thin frame in every direction like a goth Iggy Pop. While Gahan was the lightning rod of the performance, guitarist Martin Gore’s turn singing “Shake the Disease” with just piano accompaniment was an unforgettable and welcome take on the familiar.

Saturday
Despite the popular appeal of last year’s icy-pop Visions, musician Claire Boucher – known better as Grimes – began her set with nearly 20 minutes of avant-garde expanses before the mouse-ear-attired musician indulged her audience with the hooks of “Oblivion” and “Be a Body.” The push and pull of expectation and Boucher’s not-so-subtle reminder that Grimes had long been weird before she was popular made for a strangely enrapturing set. Closing with her Blood Diamonds collaboration “Phone Sex,” she happily bifurcated both worlds; the audience shook and shimmied, possibly with relief. 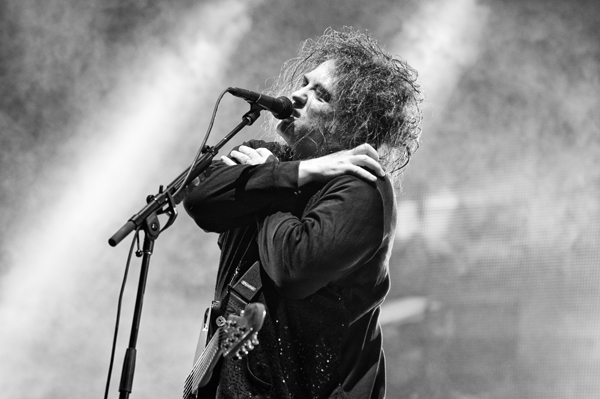 The Cure‘s headlining set that evening wasn’t as meandering or all-over energetic as that of fellow Eighties stalwarts Depeche Mode the night before. Still, the band’s intensive, workmanlike playing was uplifted by a crowd who seemed as enraptured by moody opener “Plainsong” as they were by the ubiquitous hit and set closer “Boys Don’t Cry.”

Sunday
The National is a band whose presence in front of thousands feels natural. Part of their reputation rests on their stalwart live performances, and on Sunday their lineup also featured the occasional swell of brass from two multi-instrumentalists. Those hoping to hear a new song called “Lean,” reported to be on the upcoming Hunger Games soundtrack, didn’t have that wish fulfilled here, but the band fiercely lit into tracks from this year’s Trouble Will Find Me and stretched back to 2005’s Alligator for the unhinged “Abel.”

The headliners for ACL’s final night of music resulted in the odd pairing of Atoms for Peace on one end of the park and Lionel Richie on the other. Atoms features Radiohead‘s Thom Yorke and Red Hot Chili Peppers‘ Flea alongside multi-instrumentalist Nigel Godrich and percussionists Joey Waronker and Mauro Refosco. The bottom end on Atoms’ debut, Amok, can be serpentine and subtle, but in performance the band places big bass and drums in the forefront. The Afrobeat-inspired quintet detoured from Atoms material a few times, landing on Radiohead’s “Paperbag Writer,” Yorke’s solo number “Black Swan” and the Yorke/UNKLE collaboration “Rabbit in Your Headlights.”

Moody and mysterious, the pulse of Atoms was very different from what was happening with Richie’s set, where the veteran of several decades and many musical detours performed with a stripped-down band that accented but never overshadowed the singer’s unmistakable tenor. The selection of Richie as the festival’s closer was met with some surprise – he’s more accessible and softer fare than past headliners Bob Dylan or Van Morrison. But after a long festival weekend, Richie’s openhearted set was warmly embraced, and even the hookworm of irony couldn’t dig into the mood surrounding the set (and festival) closer, “We Are the World,” which he co-wrote with the late Michael Jackson.

The success of ACL as a two-weekend festival will be argued even after the returns have come in and the park cleared. But in the swarm (and counting) of change, Richie’s set and the weekend of music as a whole are a reminder that even amid insecurity and transition, “we” as an idea and a goal is just as important to this festival as it is to the city that hosts it.