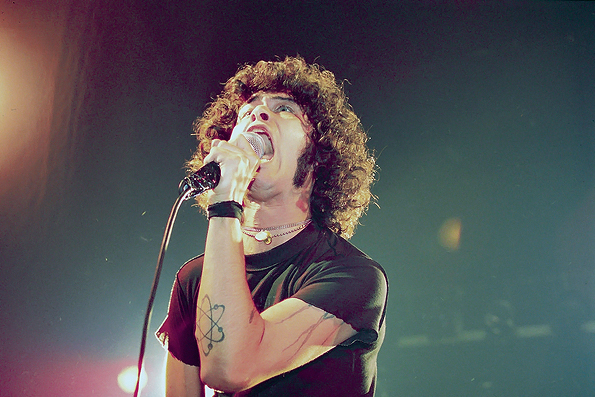 This story is from the February 15, 2001 issue of Rolling Stone.

“This is bullshit!” screams a stagehand as he and a team of pissed-off union workers push a drum riser across the stage at the Universal Amphitheater in Los Angeles.

“This is the most disorganized K-Rock show we’ve ever done,” vents another stagehand, kicking the riser, which had been misplaced in the back of the loading area. Atop this jerkily moving platform, a befuddled Tony Hajjar of At the Drive-In is kneeling, putting together his kick drum as the stagehands spit, curse and ignore him.

Onstage, the other four members of At the Drive-In are waiting. Most of the bands on the bill – No Doubt, Incubus, Papa Roach, Moby – have played so many radio shows that these freebies are nothing more than minor annoyances: A big station asks you to play as a favor, so cut short your vacation time and jet across the country for a half-hour show under a plastic banner. But this is new territory for At the Drive-In, a fierce five-piece performing machine from El Paso, Texas, that is too punk to be metal, too art-rock to be punk, too pop to be art rock, too smart to be pop and too stoned to be smart. And they are excited – or at least they were excited.

Two minutes into the band’s sound check, a crew supervisor announces that it’s break time. Everyone has to clear the stage. He tells the band to return at 5:30 P.M., and then maybe – just maybe – there will be time to sound-check before the show begins at six.

Welcome to the big time. “We’re peons, dude,” Hajjar says, not so much out of anger as out of a habit formed from years of touring in a 1981 Econoline van and getting gas money wired from home to make it to the next gig. “I feel like the new kid at school,” moans the band’s curly-coifed singer, Cedric Bixler.

Ultimately, the band’s backstage sound check ends up running into the set, cutting an already short thirty-minute time slot down to just twenty minutes. But in those few minutes, At the Drive-In deliver the high-energy wildman performance that has become both their greatest asset and their greatest burden, inspiring pundits to heap impossible titles on them: the saviors of rock & roll, the next Nirvana and, in an overstatement that could only come from the British press, the best rock band in the world.

Before the first song has even begun at the KROQ show, Omar Rodriguez has already thrown his guitar to the ground twice and Bixler has sent his microphone stand hurtling across the stage while executing his electrocution dance moves. As the band thrashes through the cut-up punk rock of its single “One Armed Scissor” – full of the splinters of guitar riffs and fragments of Philip K. Dick-like lyrics that mark an ATDI song – the audience actually starts singing along to words like “slithered entrails” and “mummified circuitry.”

To watch At the Drive-In play is to see five people going in five directions – together. Each has his own interpretation of the lyrics; their individual musical interests range from punk to salsa to dub to metal to drum-and-bass; and their ethnicities are Mexican, Welsh, Puerto Rican and Lebanese. In fact, they don’t even agree on how to pronounce certain song titles (one says, “In-vuh-lid Litter Department,” another says, “In-val-id Litter Department”).

After the show, At the Drive-In’s troubles do not abate: As Bixler stands backstage cursing himself for unintentionally insulting the L.A. crowd by saying, “Welcome to the lost city of assholes” (it sounded so funny in his head beforehand), his curls are pulled repeatedly by a drunk woman who insists he’s wearing a wig; guitarist Jim Ward is mistakenly assaulted by Papa Roach’s security team; and Mike D. of the Beastie Boys, who co-owns the Grand Royal label that the band is signed to, hovers dangerously close to punching out a belligerent audience member diss-ing the group to his face. For some reason, this is a band that everyone likes to mess with: Just a few weeks prior, Rodriguez was punched in the face before an ATDI show by a security guard and dragged outside the club by his Afro.

At the Drive-In don’t always get the respect they deserve as they knock on the door of success, but the band’s peers recognize a good thing. “Ever heard of At the Drive-In?” Tom Morello of Rage Against the Machine asked a few days before the KROQ show. “We toured with them, and they are one of my favorite bands. They are so sincere about what they do.”

Backstage at the KROQ show, Gavin Rossdale of Bush, who sneaked into a couple of seats with Gwen Stefani of No Doubt to see the band play, walks up to At the Drive-In and says that he was so impressed by their album, Relationship of Command, that he wants to work with its producer, Ross Robinson. More baffling to the band is his admission that he and Stefani use the often brutal and jarring album as make-out music.

Mark Kates, the president of Grand Royal, watches from the sidelines proudly as all this unfolds. Currently, Grand Royal pretty much revolves solely around At the Drive-In, and its staff has been working overtime to find alternative ways to break the band, chiefly through extensive play on MTV sister network M2 and exposure on high-profile Internet sites. “They don’t know how lucky they are,” Kates says of the band. “Because it’s all working.”

Instead of being confused and angst-ridden by brushes with success like the punk and alternative bands before them, At the Drive-In simply set their own rules (no lip-syncing in videos, for example), make decisions as a collective, and then go with the flow and try to ignore the hype.

“Our secret weapon,” Ward says, “is that we’ve been a band for so long, and we’ve been through so much worse shit than this. Saving rock to me is not realistic; it’s not real life. Real life to me is rolling in a van with a gallon of gas left, or crashing on someone’s floor, or running out of money to buy strings when you broke your last two strings during a show.”

The band formed in El Paso in 1994. Rodriguez, whose father was a salsa musician who had to curtail his ambitions after Omar’s unplanned birth, wanted to be part of a Latin dance band like his old man, until he discovered the Beastie Boys’ License to Ill At age twelve, he formed his very first band with future ATDI bassist Paul Hinojos. Bixler, whose father teaches Chicano studies at the University of Texas, was a Misfits fans with an intense admiration for performers like James Brown and Jackie Wilson. Bixler and Rodriguez hooked up with guitarist Ward – who footed the bill for their first single, “Hell Paso” – and later with drummer Hajjar, a student who thought the world of Metallica until Bixler and Rodriguez turned him on to punk’s do-it-yourself aesthetic.

In their DIY days, ATDI would wake up at 7:30 A.M. and rehearse for nine hours; they sent every new single and demo to punk labels like Dischord and Fat Wreck Chords, hoping for a deal; and they spent so much time building equipment cases that other punk bands made fun of them for being poseurs because they thought ATDI had bought professional cases. Eventually, the group members signed a deal with a local label, Flipside, without reading the fine print, and had to battle and pay their way out to move on up to a slightly larger label, Fearless, where they released two albums.

Slowly they built up a fan base that included Sonic Youth’s Thurston Moore. They caught the attention of Grand Royal and Ross Robinson, producer of Korn, Limp Bizkit and Slipknot, who begged to work with them. Reluctant at first, the band soon discovered that Robinson was no new-metalhead with a dyed goatee – he was more like a therapist. He would force Bixler to explain each lyric and make the group regress to childhood memories before recording. When ATDI went to record “Invalid Litter Department,” about the unsolved murders of women in Juarez, at the Mexican border, Robinson had them imagine that the kick drum was the heartbeat of all the world’s missing mothers. Pretentious, perhaps, but effective.

“I haven’t talked about this,” Hajjar says, “but in that song Ross brought up my mom. She passed away in 1988, and it was a poignant time. I don’t know if I should have gone that far when we were recording. Now, every time we play it, I associate the sonq with my emotions about her.”

“For me,” says Rodriguez, “the emotional links he made with all the songs worked. I did a lot of camping when I was younger to work on my issues as an incest survivor. And there are plenty of things, like breath therapy, that I learned but had never thought to apply to music in the studio. If we do our next record with someone else, I’m not going to sit there and talk about all this stuff that happened to me. But now that I’m conscious of it, I can use it as a tool for myself.” For Bixler, the scabs that Ross picked at were the car-crash deaths of two of Bixler’s friends from El Paso, Laura Beard and Sarah Reiser, teenagers who were in a band called Fall on Deaf Ears. “I think about them every night,” he says. “It just sticks with us now. We always play that song about them – ‘Napoleon Solo’ – at the end of our sets. Everything we do is in honor of them.”

Hajjar says that the band came out of the studio “stronger and closer than we ever were. It was just an amazing time. I can’t believe it happened.”

“We had sex,” says Rodriguez.

Though the group presents itself as a serious-minded collective, cutting up lyrics like William Burroughs, spitting south-of-the-border politics like Rage Against the Machine and, like Fugazi, lambasting slam-dancers, they are at the same time a bunch of shy, humble, silly guys – all raised by strong mothers, according to Ward.

Rodriguez and Bixler are often compared to Sixties Afro-ed revolutionaries the MC5 onstage. But if you straighten out their hair, they are the Wayne and Garth of rock. They recently moved to Long Beach, near L.A., with two friends from El Paso: Mitch, who bags groceries at Ralph’s supermarket and teases the pair relentlessly, and Jeremy, who repossesses cars and plays with Rodriguez and Bixler in a dub side project called Defacto. Rodriguez says he prefers the unreality of their home studio, the House of Anikulapo (taken from the late Nigerian bandleader Fela Kuti’s middle name, which means “he who carries death in his pouch”), to the outside world.

Backstage at the Universal Amphitheater, three-fifths of the band members lock themselves in their dressingroom enclave and get stoned, pick on each other and sing Captain Beefheart songs. When they open the door to fumigate the room, no one is sure what time it is. Bixler predicts that they will see a janitor in the hallway sweeping the floor as the sun rises outside. But instead, they find the tattooed, sweating spectacle of Coby Dick of Papa Roach, who has just walked offstage. Dick freezes when he sees Bixler and then marches up to him. “You guys play with such energy, heart and passion,” he says. “It’s an inspiration to us. It’s an honor to play on the same stage as you.”

Then he walks up to Ward and apologizes about the security guards who attacked him when he was in the audience watching the show. No one said being an inspiration was easy work.