On the second night of KROQ Almost Acoustic Christmas, my true love gave to me five-plus hours of music at the Shrine Auditorium in Los Angeles. While the first night went heavy on guitars, testosterone and anguish, the second night had a more diverse array of sounds, with an accent on dance music and polyrhythmic savvy. The powerhouse alternative station booked nine more acts (in order: Atlas Genius, Bastille, Portugal. The Man, Fitz and the Tantrums, Capital Cities, the Neighbourhood, Lorde, Phoenix, Arcade Fire), and kept the hits coming on a revolving stage.

Where Does Arcade Fire’s ‘Reflektor’ Rank on Our 50 Best Albums of 2013 List?

The gender imbalance was improved from the night before, if only slightly. Instead of one female performer among the members of nine bands, there were now four (Lorde, Noelle Scaggs of Fitz and the Tantrums, Régine Chassagne and Sarah Neufeld of Arcade Fire). Also rarely seen onstage, despite the show’s name: acoustic instruments. Some more Christmas presents, superlatives and lumps of coal:

Best set
Capital Cities looked like they were having more fun than any other band on the Shrine stage. Soon the audience was having a blast, too. Some of the things that made Capital Cities awesome: matching black satin jackets, as if they were all on the same bowling team; extended trumpet solos; the fearsome mountain-man beard on Sebu Simonian; simple but enthusiastic dance routines; choruses like “I sold my bed, but not my stereo”; excellent dance grooves. By the end, the crowd was stripping down and twirling their clothes over their heads.

Most unpredictable set
An Arcade Fire show is an odd mix of watching one of the world’s greatest rock bands and attending a sixth-grade play where you hope the kids don’t accidentally knock over the scenery. The band was the only one to require extra setup time, apparently so they could install five imposters with giant heads, looking like Team America characters made large, playing “Rebellion (Lies).” Win Butler, in a garish shirt and a pinto jacket, led the real 11-person Arcade Fire onstage, shooing away the big-headed intruders. Chaos ensued: Butler took telephones and crutches from audience members and put a mirrored bag over his head. But excellent music also ensued: “Here Comes the Night Time” kicked ass, and “Neighborhood #3” sounded particularly great with extra percussion. If an Arcade Fire set didn’t feel like it was on the verge of falling apart at any moment, it wouldn’t be as thrilling when they pulled it off. 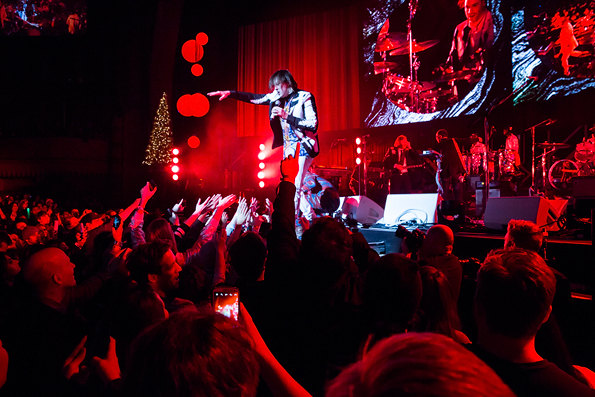 Most surprising guest
Curt Smith of Tears for Fears, gray-haired but trim at age 52, came out to join Portugal. the Man for a version of his hit “Everybody Wants to Rule the World.” He sounded great.

Band that most needs to be in a new wave video directed by Russell Mulcahy
All six members of Phoenix squeezed in close together on the stage and wore color-coordinated outfits with splashes of red. And then the Frenchmen rocked the house, proving that they are much better live than on disc. Singer Thomas Mars concluded the set by heading into the audience, making his way through row 16, and then cruising back to the stage by walking on top of the seats.

Strangest declaration of the night
“I don’t like encores,” Lorde told the crowd after playing her hit “Royals.” “They’re weird.” Apparently she didn’t notice that exactly none of the other acts were doing encores in their 30-to-45 minute sets. Although the 17-year-old Lorde was prone to fits of mumbling and hiding behind her hair, she somehow remained intensely charismatic. 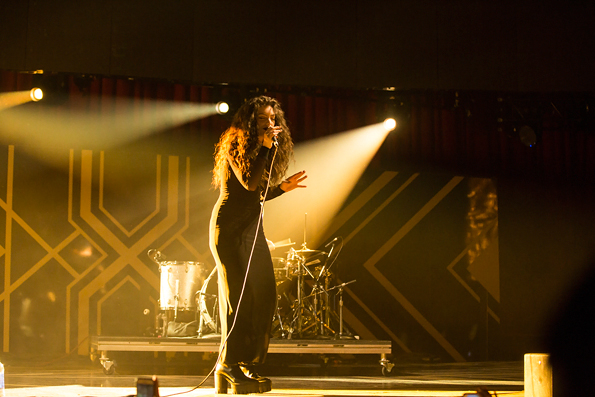 Hardest-working performer
Bastille member Kyle Simmons, who at times played the keyboard with one hand and drummed with the other. Bastille, an erudite British band, likes to flood the zone instrumentally: sometimes all four members play drums, while on “Overjoyed,” three members played keyboards simultaneously. At no point were there any guitars, which was a relief after Saturday night’s six-string overload.

Most distinctive visual presentation
Jesse Rutherford, singer for the Neighbourhood, has hair that’s half-black and half-white (yes, pretty much like Cruella de Ville). The band worked that visual trademark hard – keeping their video screens black and white, for example. Unfortunately, the Neighbourhood’s music suggested that the band had listened to U2 and decided that what made them great was the self-importance.

Band most in need of career advice
Atlas Genius, from Australia, sounded generic when they did a ballad or tried to rock out, but showed sparks of life whenever they played a disco beat. Clearly they need to accept their EDM destiny – get them into the studio with Avicii, stat!

Trippiest act
Portugal. The Man, with a six-man live lineup, including violin and cello, blended a steady dance groove, falsetto vocals and psychedelic freakouts. They proved that Sarah Palin is, at best, the second-weirdest export from Wasilla, Alaska. 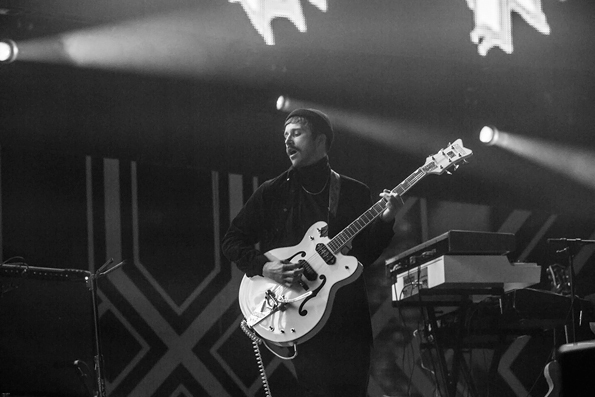 Most awkward lead singer
Imagine Will Ferrell in a movie where he plays a dad who decides to get his old funk band back together for his 25th high school reunion: he throws himself into the songs a little too exuberantly, to the dismay of his children. Unfortunately, that is the trying-too-hard onstage presence of Michael Fitzpatrick, leader of Fitz and the Tantrums. Otherwise, the band delivered a great set, if not an innovative one: modern L.A. neo-soul that sounds just like vintage London neo-soul.

Best cover
Capital Cities did a slowed-down, hypnotic version of the Bee Gees‘ “Stayin’ Alive” that didn’t seem like it could get any better – and then they added falsetto. By the time they threw in a snatch of Weezer‘s “The Sweater Song,” they were just showing off.