Apple unveiled its much-hyped video-streaming product on stage at the Steve Jobs Theater on Monday morning, introducing dozens of original, star-studded TV and film projects with it.

At the Cupertino, California media event — which Apple named “Show Time” and touted with an all-out marketing campaign complete with trailers and teasers in the days beforehand — Apple revealed two major new products around video entertainment: Apple TV+, a premium video-streaming subscription service with dozens of new original titles (referred to by executives as the “best stories ever told” and projects that “will make us believe anything is possible”), and Apple TV Channels, a new offering inside the Apple TV app that offers à la carte subscriptions to existing television and film services.

Apple said Apple TV+ will be available across devices online and offline starting in the fall, but the company did not announce a pricing model. Reese Witherspoon, Jennifer Aniston and Steve Carrell joined Apple executives on stage to debut a series called The Morning Show, which the actors said is a “high-velocity thrill ride” that offers an inside view into the “complex relationships between men and women in the workplace.” Jason Momoa and Alfre Woodward announced a series called See, and Kumail Nanjiani announced Little America, a half-hour anthology that will tell stories around immigration. Sara Bareilles and J.J. Abrams took the stage to announce Little Voices, a comedy-drama series around music. Filmmakers including Steven Spielberg and M. Night Shyamalan also appeared in a video promoting Apple’s new original television projects. The last “storyteller” to appear on stage was Oprah Winfrey, who is working with Apple on two documentaries themed around workplace relationships and mental health.

Apple TV Channels — a separate offering — is a “pay for what you want” experience that brings together existing TV services. Via Apple TV Channels, users can switch between services such as HBO, Hulu, DirecTV, Spectrum and FuboTV from within the Apple TV app. The vision is to unite “your favorite shows, movies, sports and news” in one place, Apple executives said at the event. The new feature will roll out to computers as well as Smart TVs in the coming months, and availability will expand from 10 countries to 100. Netflix’s CEO Reed Hastings confirmed last week that his company would not be integrating its service, because while “Apple is a great company,” Netflix prefers “to have our customers watch our content in our service.” 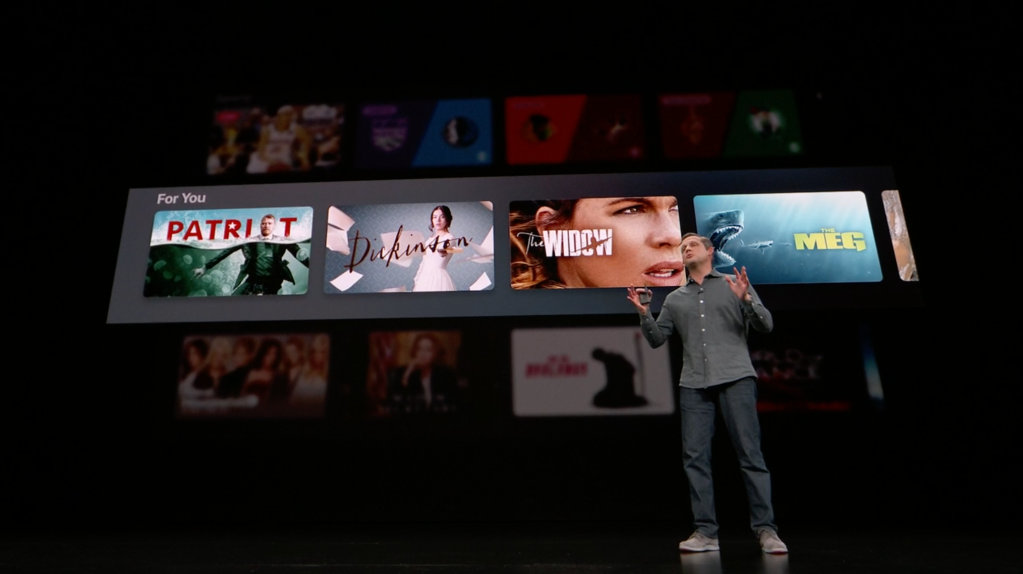 Reports in the last few weeks revealed that other shows users can expect from Apple’s slate of original content include Are You Sleeping?, which stars Octavia Spencer; Ronald D. Moore’s For All Mankind; a thriller series by M. Night Shyamalan; a half-hour comedy series about Emily Dickinson starring Hailee Steinfeld; and an unnamed comedy from Charlie Day and Rob McElhenney. The Wall Street Journal reported over the weekend that Apple’s newly ambitious foray into services over physical product — and specifically entertainment-focused streaming services — has much to do with its stagnating hardware sales, with one person familiar to the matter saying that Apple executives “were freaked out” by the lack of avenues for easy growth after iPhone sales started slowing last year.

On Monday, Apple also announced Apple News+, a $9.99 news and magazine subscription service that the company says is worth $8,000 a year in content. Though rumors of an all-in-one news, television and music bundle offering have been swirling around the secretive tech company for the last year, Apple did not announce a bundled service this week joining together News, TV or Music. Apple Music is still a standalone service offered at $9.99 a month, and it was absent from mention at Monday’s event.