Facing ever-tightening competition, Apple Music has picked up the pace in the last few months. After growing to 50 million subscribers, launching a music-publishing division and hosting a number of exclusive concerts and documentaries on the content side, the music-streaming service is now working on bolstering its offerings in one key area: data.

Apple Music, in a software update Friday to all users, is rolling out 116 “top 100” numeric charts, which will display the top-streamed songs on Apple Music refreshed on a regular basis. In a demo to Rolling Stone, Apple Music executives showed how the charts — one global chart and a top 100 chart for every country in which Apple Music is available — are grouped together under the platform’s “Browse” tab and have a similar visual appearance to that of playlists or albums. Each chart is updated daily at 12 a.m. PST.

While Apple Music’s executives did not comment on the timing of the charts’ debut or the inspiration for adding the feature into the service, music charts — which are just as much presentations of influence and control to the industry as they are bits of information for the casual user — have become a hot topic in the music business in the last year. In May, Billboard changed its algorithm for its signature charts to weigh paid streams more than free streams, which was met with equal parts approval and scorn. (Hint: It depends which music-streaming company you ask.) A week after those changes, YouTube Music chimed in with its own set of platform-specific charts in May; YouTube’s head of label relations Stephen Bryan told Rolling Stone that because of YouTube’s global influence as the internet’s go-to music destination, those charts offer “the clearest view in what’s happening in music today.”

'There's the Elephant in the Room': Inside the Beautiful Chaos of Clive Davis' Pre-Grammy Gala

Indeed, digital streaming numbers have become a closely-watched metric of success for artists and managers, while record labels and A&R scouts also eagerly scan them for promising new talent. But because streams are impossible to weigh against CD sales or downloads — while the popularly-adopted standard is 1,000 streams to 10 song sales, that is still an arbitrary ratio — looking at streaming chart positions alone doesn’t always paint a meaningful portrait of the most popular songs or artists.

Apple Music gave all of its subscribers access to the new charts feature on Friday, while broader updates to Apple’s software and hardware products are expected to be presented at the company’s September 12 event. 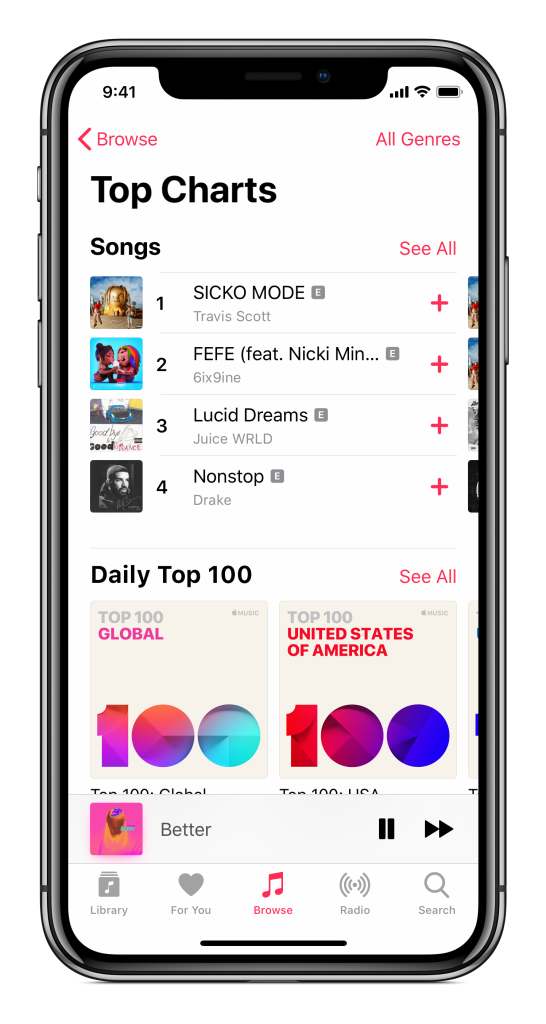