Apple’s latest software update this week, iOS 12, brings a number of design and functionality tweaks to its streaming service. But the most useful new Apple Music feature allows users to find and play songs by searching their lyrics.

The feature proves particularly helpful in the case of songs whose titles don’t reflect recognizable key phrases, as shown in the screenshots below. The service is available even for people without an Apple Music subscription, who can access it by opening the app and navigating to the search tab without logging in or playing music. (For test runs, perhaps.) Though the feature is only a modest supplement to the listening experience, it makes the streaming service — which launched in 2015 and has been growing aggressively ever since, hitting 50 million subscribers this year — easier to trawl for songs than its main competitor, Spotify. While Spotify’s Genius-powered “Behind the Lyrics” feature on hit songs has proven a viral hit, it does not currently have a lyric search functionality or display song lyrics in their entirety.

Lyrics have not been licensed for the entirety of Apple Music’s catalog, which has 50 million songs, but the streaming service told Rolling Stone in a demo last month that they’re available for the majority of its catalog. 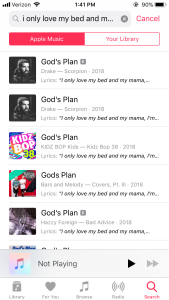 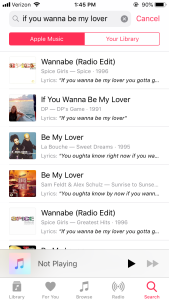 In iOS 12, Apple Music is also updated with a new look for artist pages, a personalized playlist based on users’ friends’ music activity, an editorially curated “Essential Albums” section on many artist pages and country-specific top song charts.