Hi-fi music streaming is officially mainstream. Tech giant Amazon announced on Tuesday that it is launching Amazon Music HD, a new tier of its existing music-streaming service that delivers lossless audio streaming — at both higher quality and a higher cost.

The new service, available immediately in the U.S., UK, Germany, and Japan, is priced at $12.99 a month for Amazon Prime members and $14.99 a month for non-Prime members; current Amazon Music subscribers can upgrade to the HD tier for an extra $5 a month. Amazon is offering a 90-day free trial for the new service, which will deliver 50 million songs at 16-bit/44.1kHz (CD quality) and several million other songs at the higher-quality depth of 24 bits and sample rate of up to 192kHz (which Amazon refers to as “Ultra HD”). The company promises that the new tier will “play the highest quality audio the customer’s device and network conditions will support,” and highlights, in its marketing materials, a number of Amazon devices and third-party hardware products that can handle high-resolution digital audio. 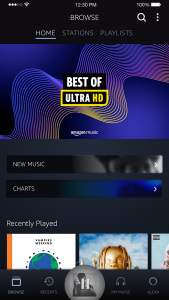 Steve Boom, vice president of Amazon Music, tells Rolling Stone that the company “wants this to to be mass-market” and expects a substantial portion of the current Amazon Music user base to migrate to the HD tier, though he declined to share specific target numbers. When the company surveyed customers about what they wanted the most out of the music-streaming experience, he says, three common responses emerged: a large catalog size, ease of use, and high-quality music. “What we found is that people really do care about this,” Boom says.

Surveys also revealed that non-audiophile music fans have a generally fractured understanding of the terms “high resolution,” “high quality,” “high fidelity,” and the no-less-murky abbreviation “hi-fi” — and though all of these are the same thing, some listeners think the terms are referencing different levels of quality — which is why Amazon decided to go with simply “HD” for its new tier’s branding, Boom says.

The tech company was rumored to have been gearing up a hi-res music-streaming service earlier this year, shortly after it announced a free streaming service tied to its Echo devices. Tuesday’s announcement solidifies Amazon’s position as an unusually diverse player in the music industry, as it now caters to multiple levels of streaming users, in addition to boasting a seemingly endless catalog of physical music products and launching exclusive, somewhat surrealist marketing deals with artists like Taylor Swift.

The HD tier also puts Amazon ahead of its major rivals Apple Music and Spotify, neither of which have announced plans for high-resolution streaming. But the trend has been bubbling for a few years, starting with services like Deezer, Jay-Z’s Tidal, French music service Qobuz, and Sony Music Japan’s Mora Qualitas. Brian Ringer, Rhapsody’s Asia Pacific general manager and one of the leaders behind Mora Qualitas, told Rolling Stone last year that the U.S. and European music markets are finally “starting to follow” on the existing hi-res enthusiasm in countries like Japan as they become exposed to cheaper and more sophisticated technology. “Audiophiles love vinyl because of its enhanced listening experience, and high-res audio can capture that enhanced experience and not have it squished down into a digital CD,” Ringer said. “People listen to a couple of songs with a nice pair of headphones and go, ‘Oh, I get it.’”

Amazon’s press release announcing Music HD on Tuesday features Neil Young, who was one of the first champions of hi-res audio streaming in 2014 when he raised $6.2 million via Kickstarter to start his company Pono, commenting: “Earth will be changed forever when Amazon introduces high quality streaming to the masses. This will be the biggest thing to happen in music since the introduction of digital audio 40 years ago.”