On Friday night at Brooklyn’s Music Hall of Williamsburg, the duo played the second of two sold-out debut shows in New York City, and the enthusiasm of the crowd underscored how influential their distinctly Brit style of dance-music-couched R&B has become. In part, they have their friends and collaborators Disclosure to thank for that – the Brooklyn audience cheered no louder than when the duo performed “White Noise,” the bubbly future house track from Disclosure’s debut album, Settle, in which Francis belts a light, layered chorus that showcases the range of her voice. AlunaGeorge’s popped R&B is particularly relevant in an era in which Aaliyah-mania seems to reach ever-rising peaks, as does the interest in skewed beats with unpredictable soul voices. They’re also one of the freshest groups on the British dance continuum of UK funky house, the last time across-the-ponders had this much enthusiasm for divatude on their dancefloors. But where funky predecessors like Kyla, Donae’o, and even superstar singer Katy B focus on soul syncopation, AlunaGeorge ropes in Nineties pop with a fierceness, skewing towards singalong choruses and bubblegummy yearning for the tough and brokenhearted. 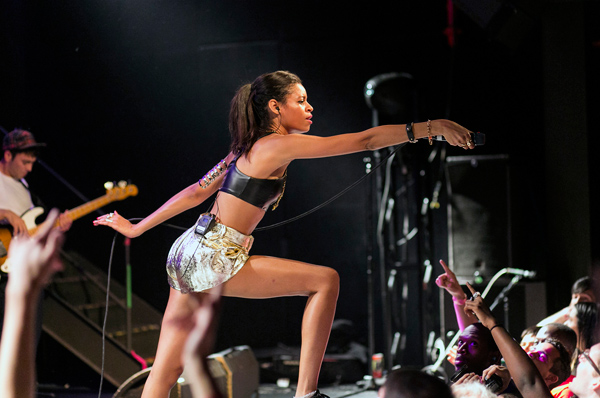 The most important elements translated well. Francis exuded a physical confidence onstage that was underscored by her performing costume, a makeshift boxing ensemble complete with a satin fight robe embellished with a sparkly “A,” and a racerback bra with a gilded “G,” plus occasional scrapper’s dance moves, a left hook here and there. Her voice was equally strong, even when it was pitchy or veered off-key; she knows her gift is her tone, a nasally, sweetly high, diaphragmal thing that sounds like a baby responding to SWV’s Coko Clemons. It worked best on midtempo Body Music standouts like the wronged-woman au revoir anthem “Attracting Flies” and the deceptively simple stunner “Best Be Believin,” but unfortunately the essence got lost a bit in the instrumentation.

Reid’s synths are delicate and subtle, and he folds in dreamy samples and jaunty funk lines deftly enough that even wild organ solos don’t detract from Francis’ voice; unfortunately, the addition of a live drummer who seemed to lean on the cymbals the whole time diminished the warmth of Reid’s beats. They had a live bassist, too, who added to the undertones, but who knows why so many electronic (and rap) acts feel compelled to add acoustic elements or full bands to their live shows. Everyone would be better off spending the money on a giant subwoofer and artful projections, or backup dancers. Supreme Cuts, the atmospheric Chicago footwork producers, were AlunaGeorge’s compelling opening act; their laptops and live synths enveloped the somnambulist darkness of the Music Hall, and they would have been a better backing band.

Band misstep aside, AlunaGeorge is clearly onto something. Francis remained the focal point of the night, a star in her own right who twirled and punched the air and flopped around her ponytail like someone who’s been ready for the big time for a while now, and Reid seems content to lift her up. After the duo closed with “Your Drums, Your Love,” the sleepy, sub-bassy love ballad that put them on the map, they linked arms and took a mutual bow, waving thankfully at a fanatically cheering audience and grinning at each other like BFFs on their mutual destiny. They didn’t emerge for an encore, but they exuded enough surety not to need it.