Compared to my last two spring flings at the Beacon Theater with the Allman Brothers Band – a stunning 2011 recreation of Live at Fillmore East; last year’s emergency triumph minus an ailing Gregg Allman – the second night of the group’s 2013 New York residency, on March 2nd, was a normal show. That’s normal as in no thematic anniversary segues, no long parade of celebrity jammers, and we got “Whipping Post” for the encore.

This was also a normal Allman Brothers gig in the classic sense – that every active, improvising-rock band in America would kill for a few minutes at the peaks the Allmans, now in their 44th year, hit repeatedly over their two sets, as if this was just another day on the night shift.

The highs came right away, in “Done Somebody Wrong,” the Elmore James cover on Fillmore East: the choppy, declarative shriek of Derek Trucks’ slide guitar in the opening riff; the fluid exposition and snapping-whip bite in guitarist Warren Haynes‘ first-round solo. At one point during another James number, the slow blues “The Sky Is Crying,” Derek’s uncle, drummer Butch Trucks, hammered his snare in jolting accents, like a storm about to break, behind the guitarist’s whooping-slide break. And on “Whipping Post,” Haynes countered the thick, vicious surge of the drum corps – Butch, Jaimoe and pecussionist Marc Quiñones – and bassist Oteil Burbridge with a defiantly bright solo: at once plaintive and fighting.

This September marks the 40th anniversary of the Allmans’ fifth album, Brothers and Sisters, made after their second traumatic loss: the death of bassist Berry Oakley in a 1972 motorcycle accident, a year after founding guitarist Duane Allman perished in a bike crash. Tonight, the band only played Gregg’s “Come and Go Blues” from that album to note the occasion.

Instead, the Allmans emphasized the resurrection in their story and the durability of their songbook. They roamed wide in the first set, jumping from “Every Hungry Woman” on 1969’s The Allman Brothers Band to a new Warren Haynes song, “Dusk Til Dawn” – waltz-time R&B with a straight slow-groove middle – then back to 1990’s Seven Turns for the lurching blues “Low Down Dirty Mean” and closing with the ecstatic gallop of “Revival” from 1970’s Idlewild South. Guitarist David Grissom (John Mellencamp, Joe Ely) joined Derek and Haynes for a crossfire in “You Don’t Love Me.” At the end, as the rhythm section hit a holding-pattern roll, Haynes turned to Derek and Grissom, swinging his finger between them as if to say, “Okay, you two guys shoot it out” – which they did. 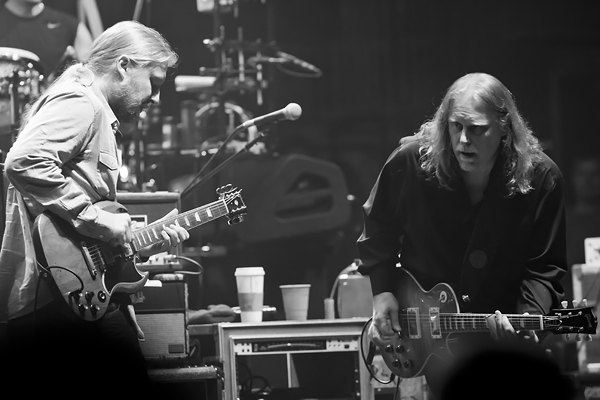 The second half of the night began in mourning – an acoustic cover of the country murder ballad “Long Black Veil,” sung by Gregg with the rough, affecting resignation of a man who has seen too many graves and come too close to his own – and stayed there, in a compelling streak of guilt and suffering: Albert King’s “Breaking Up Somebody’s Home”; the Allmans’ own “Dreams”; “Why Does Love Got to Be So Sad” by Derek and the Dominos; and the instrumental requiem “In Memory of Elizabeth Reed.” But the Allmans fought the black with sustained, cohesive fury. On “Elizabeth Reed,” Derek’s spectacular, skidding crescendos were quickly followed by the affirming euphoria of Haynes’ climbing, elegant seizures.

The differences and challenge in their voices, as players, was plain. So was the unique bond they have forged and sustained in this setting. Rooted in the original dynamics of Duane and former guitarist Dickey Betts, Derek and Haynes are now a decade into their own ascending history with the Allman Brothers. In a band that has known too much tragedy and keeps dodging close calls (such as Gregg’s recent victory over hepatitis), the two guitarists have become a loyal, renewing resource.

The Allman Brothers will be at the Beacon through March 17th. It should be forever.